ONG&ONG have completed the renovation of an early 1900’s shophouse into a contemporary family home in Singapore. 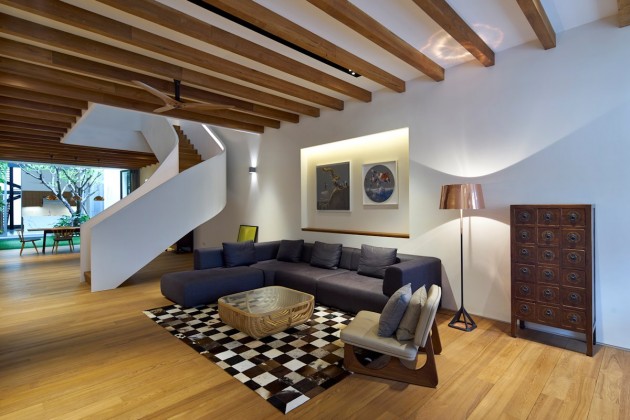 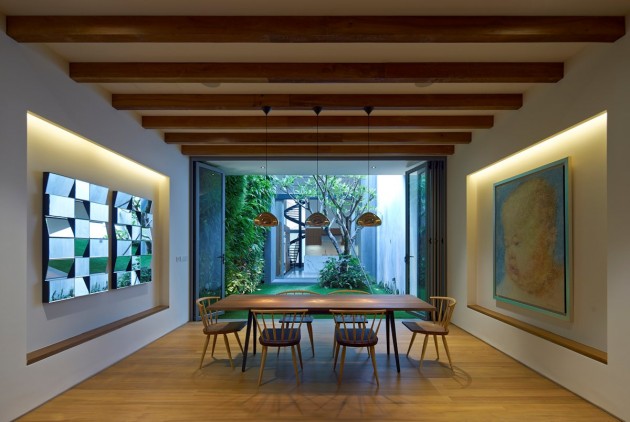 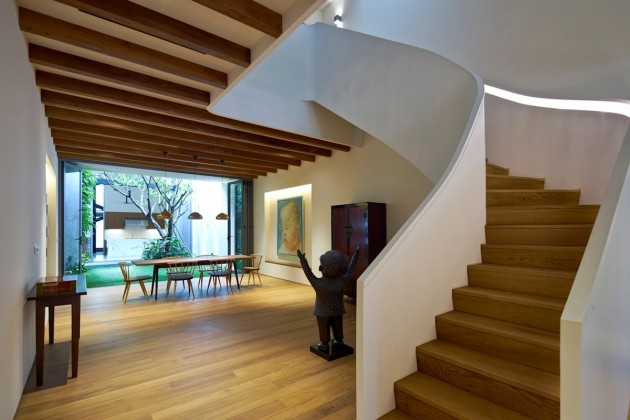 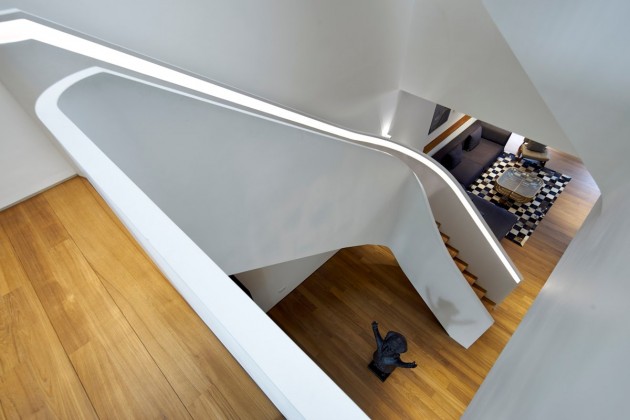 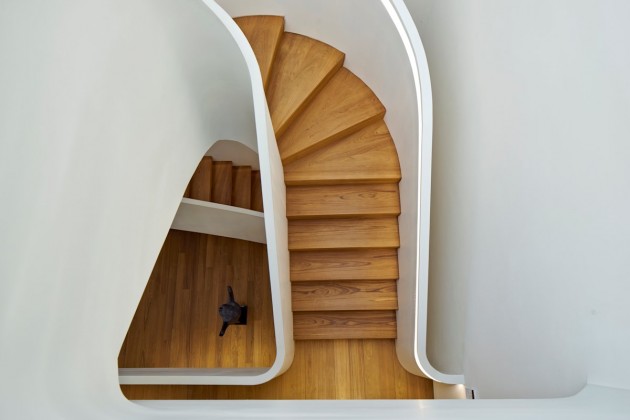 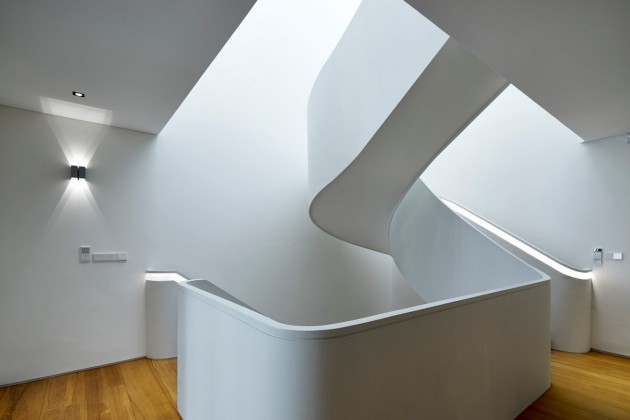 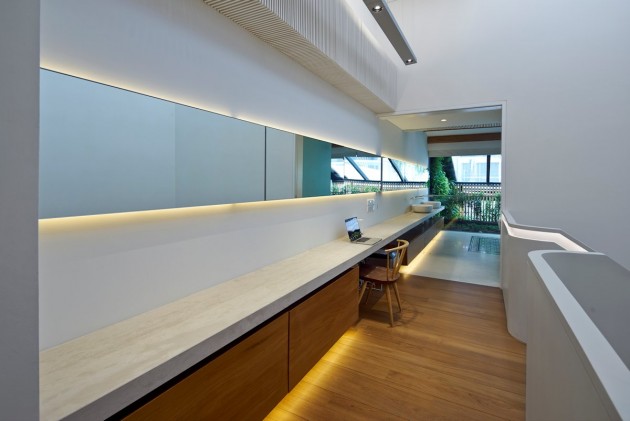 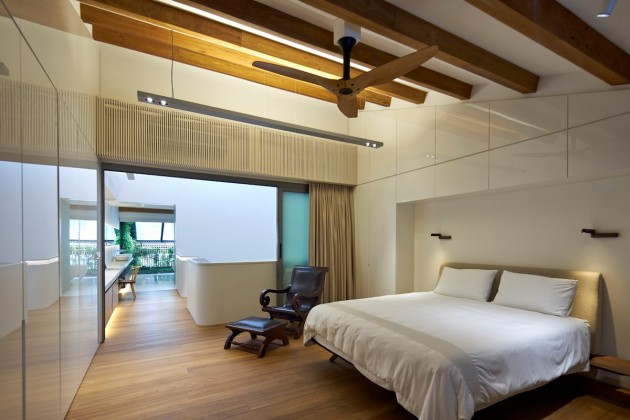 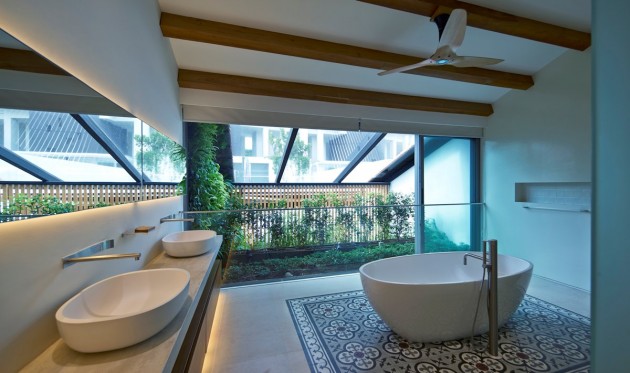 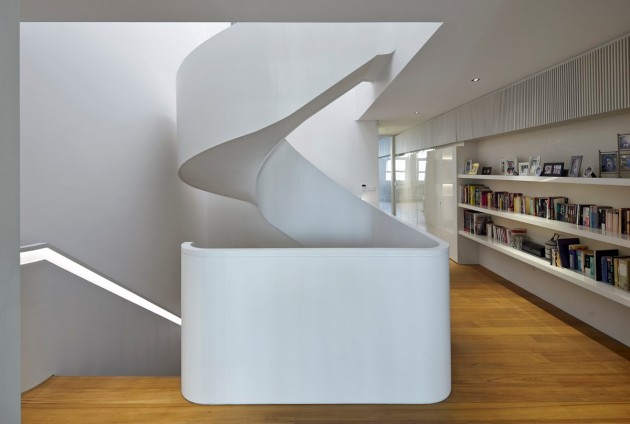 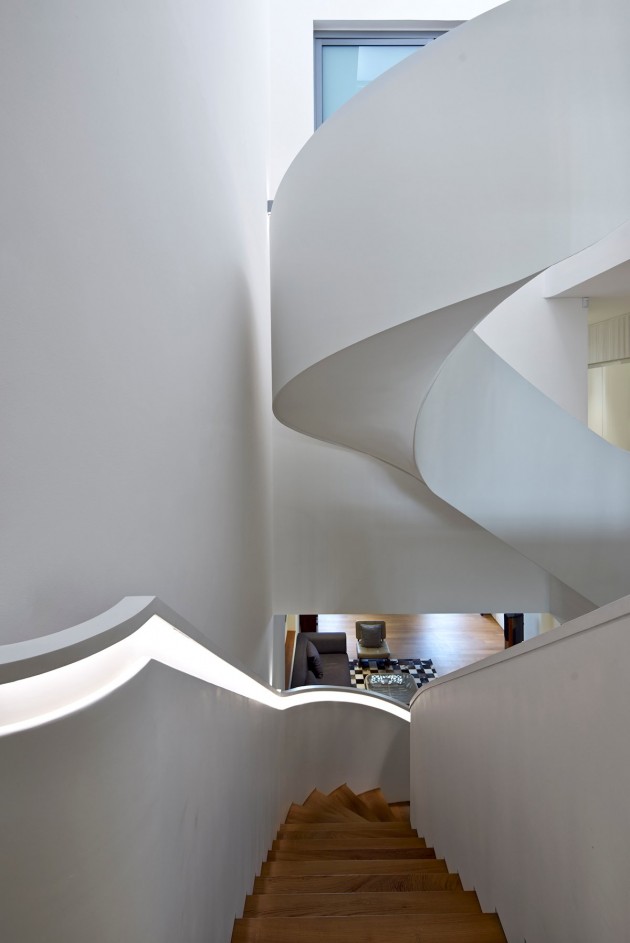 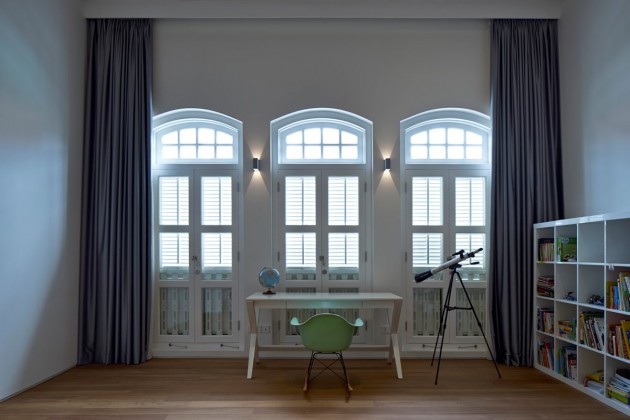 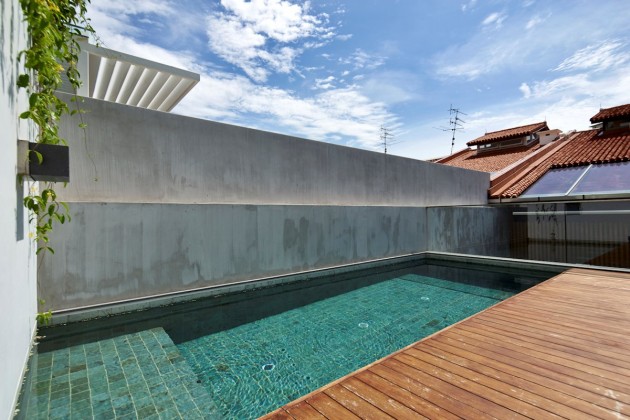 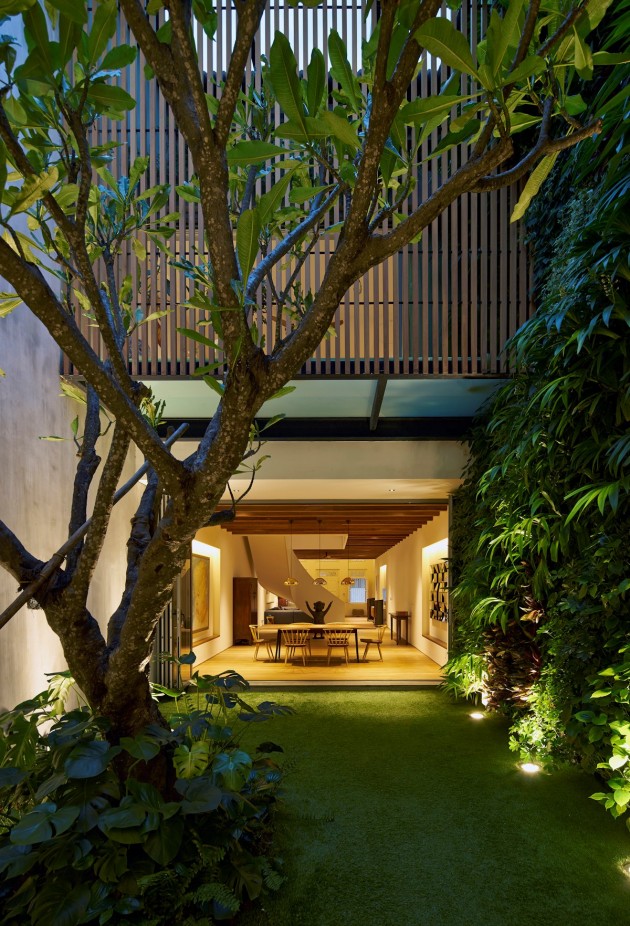 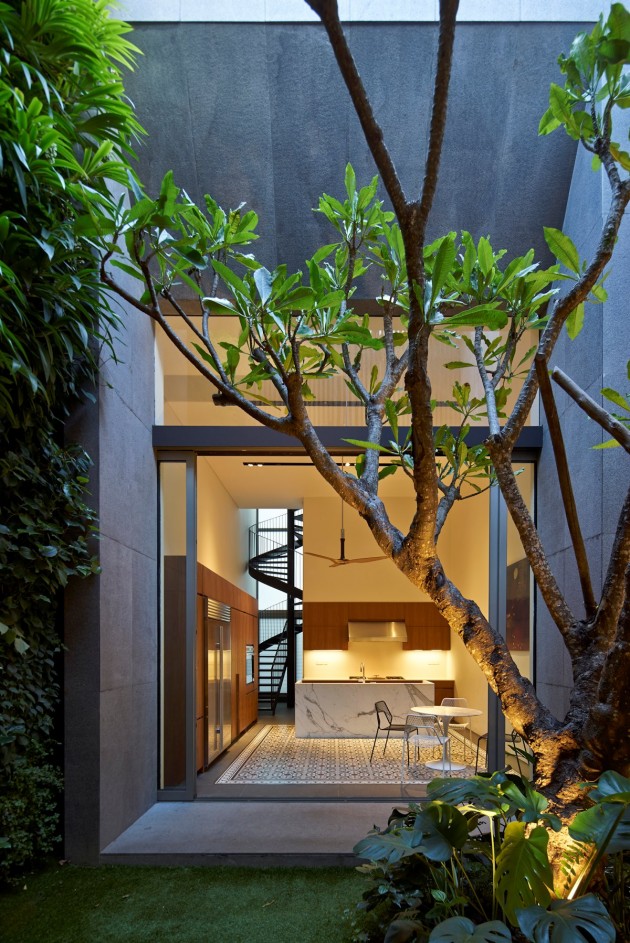 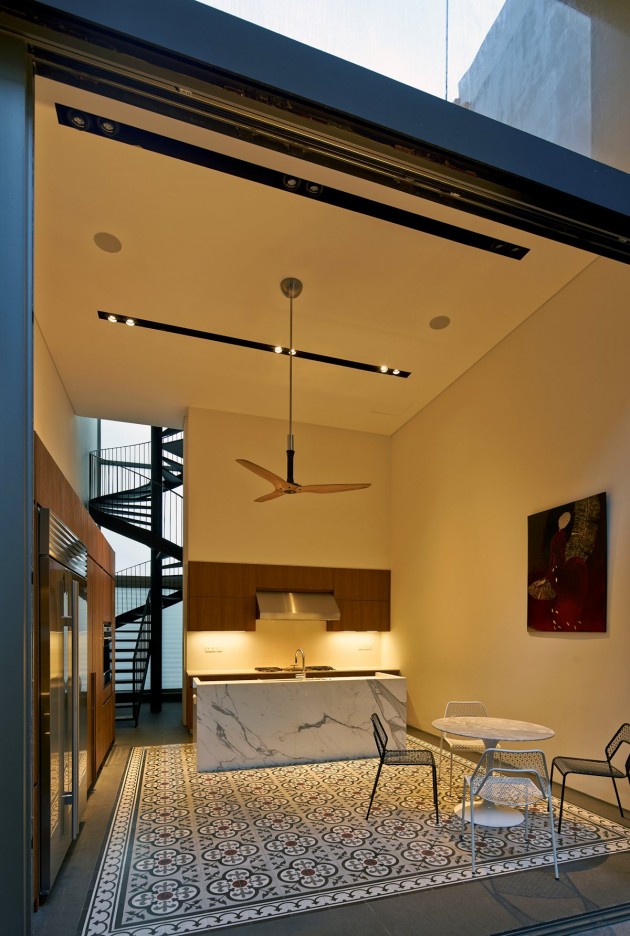 The 17BR-House is a Peranakan shophouse originally built between 1900 and 1940. The homeowners wanted to build a warm family home that would preserve the shophouse’s historical character and reverse the drastic alterations done during its previous incarnation as an office space.

In reinstating 17BR-House as a residence, an inner courtyard was created on the first floor, allowing sunlight and air to flow freely into and throughout the house. The installation of a green wall as well as the covering of the floor entirely in carpet grass transforms the courtyard into a quaint indoor garden. This space forms the visual focus for the first floor; with the absence of partition walls, there is a seamless visual transition from the kitchen at the back of the building to the living area at the front, allowing the family-oriented homeowner to interact with his children while indulging in culinary exploits in the kitchen.

A dramatic spiral staircase spanning all three levels maximises vertical circulation while skylights in the jack roof directly above the staircase provide natural illumination. Timber beams installed in the ceiling of the first floor and the roof adds an old world charm to the home.

The second floor holds two bedrooms; both share a bathroom, a long corridor lined with bookshelves and storage space, as well as equally enjoyable views, one of the traditional façade and the other of the green wall in the courtyard.

The top floor houses the master bedroom and a separate bathroom visually connected to the bedroom via a long slab of limestone that serves as the top counter of the bathroom’s vanity and continues onward into the corridor, forming a functional desk area amidst a bookshelf-lined wall. The skylight in the master bathroom illuminates both the bathroom and the balcony on the second floor with natural daylight.

The shophouse’s rear comprises a kitchen, the service quarters as well as a 7-metre long swimming pool, with traditional glazed floor tiles and a replica spiral staircase at the back reminiscent of the shophouse’s early days.

The façade’s restoration, with the reversion to a single pintu pagar door, the reinstatement of the traditional, taller windows on the second floor, and the use of shiny enamel-finished dado tiles, completes the project that goes beyond the creation of a perfect, modern family home to a preservation of an invaluable cultural heritage.

The shophouse had been in a bad state, having been stripped of its historical characteristics and renovated for office use. With much support from the client, the architects made a conscious effort to bring these traditional elements back while also reinstating the shophouse to residential use. Considering the scale of the restorative work required the final product is both a perfect home for the modern family as well as a fitting tribute to the shophouse’s history.