“The Mullet,” designed by March Studio, is an extension to a home in Melbourne, Australia, that accommodates the request from the owners, to have a contemporary family home with a challenging design, so they could show-off the capabilities of their construction company. 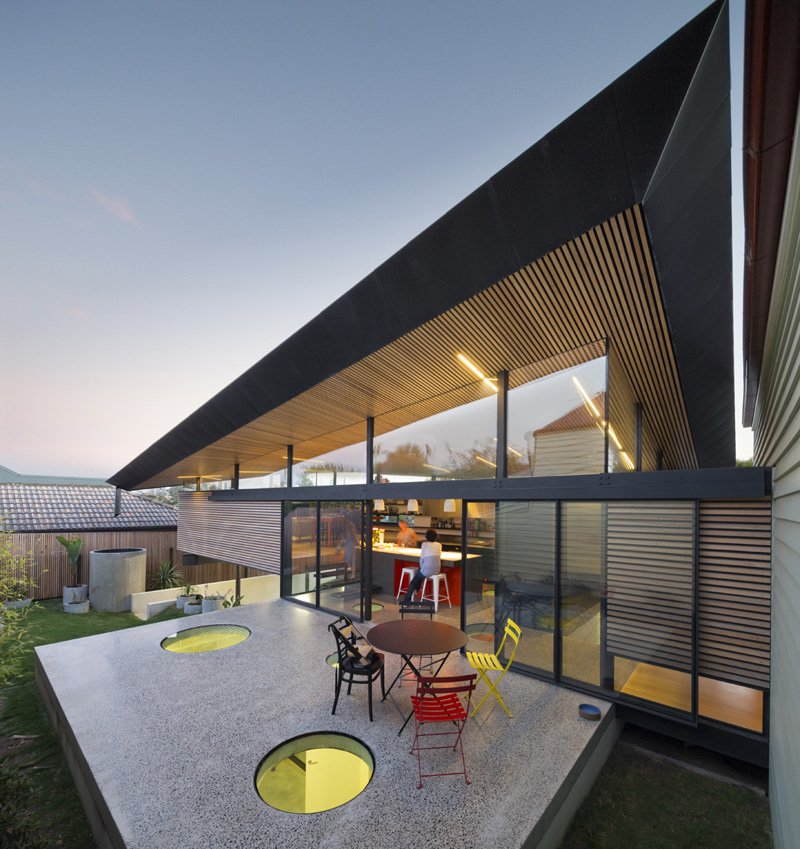 Situated in Melbourne’s inner-city suburb of Kensington, ‘The Mullet’ performs contorted gymnastics in order to facilitate an ambitious brief on a small, yet opportunistic site. The clients, Scott Smith and Phoebe Moore, wanted to commission not only a new and comfortable home, but also sought a challenging design. Running a family business in construction, Scott and Phoebe’s own home would become an opportunity for them to showcase their own capabilities. 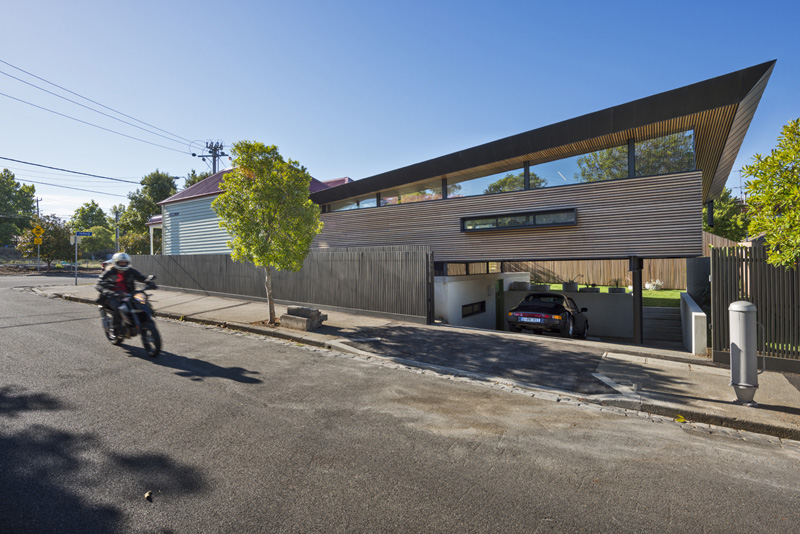 A Heritage overlay shaped the design for the front of the dwelling, requiring that the cottage facade and first few rooms flanking Hardiman Street be retained and renovated, (red roof and all.) This is where the formality is, the face to the heritage land of Eastwood Street blends seamlessly with its cottage neighbours. Three bedrooms and two bathrooms are resolved into the pre-determined Edwardian shell, freeing up the new extension for the living areas. 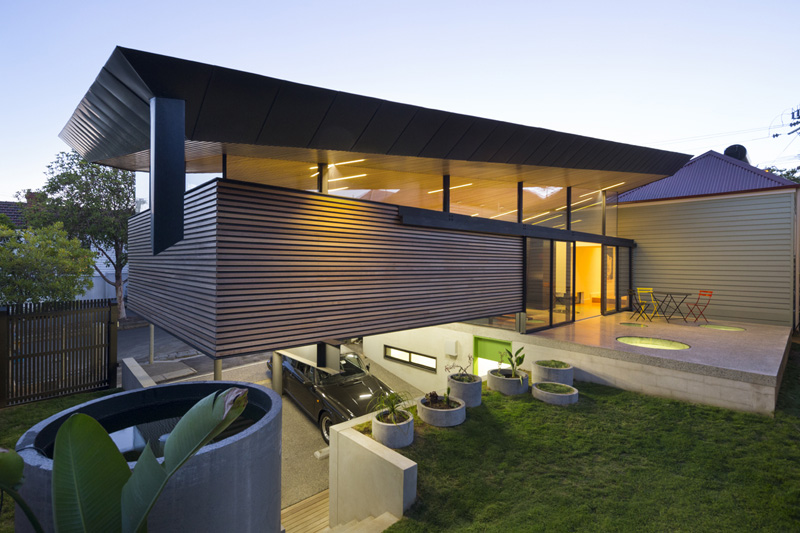 The ‘fun’ begins to emerge when rounding Hardiman Street. “I don’t like it” – says one of the locals half way through construction. “It’s not in keeping with the area…” The new extension is not meant to be sympathetic to an older style but rather been shaped by the clients’ brief, solar access and one of Melbourne’s best views back onto the city. 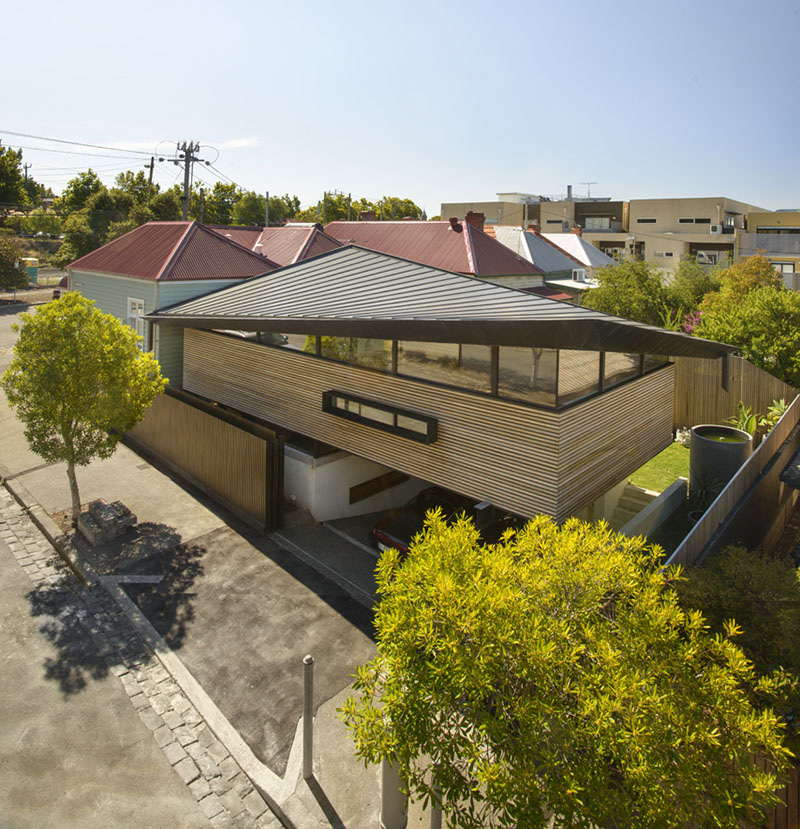 The balancing act that the local resident detested emerged when the brief called for off-street parking. The house would straddle the parking area, and even with the grade of Hardiman Street to advantage, excavation was unavoidable. Since a digger would be coming to site anyway, the opportunity to dig a little deeper and sink a large concrete box (along with the children in it) was far too good to refuse. 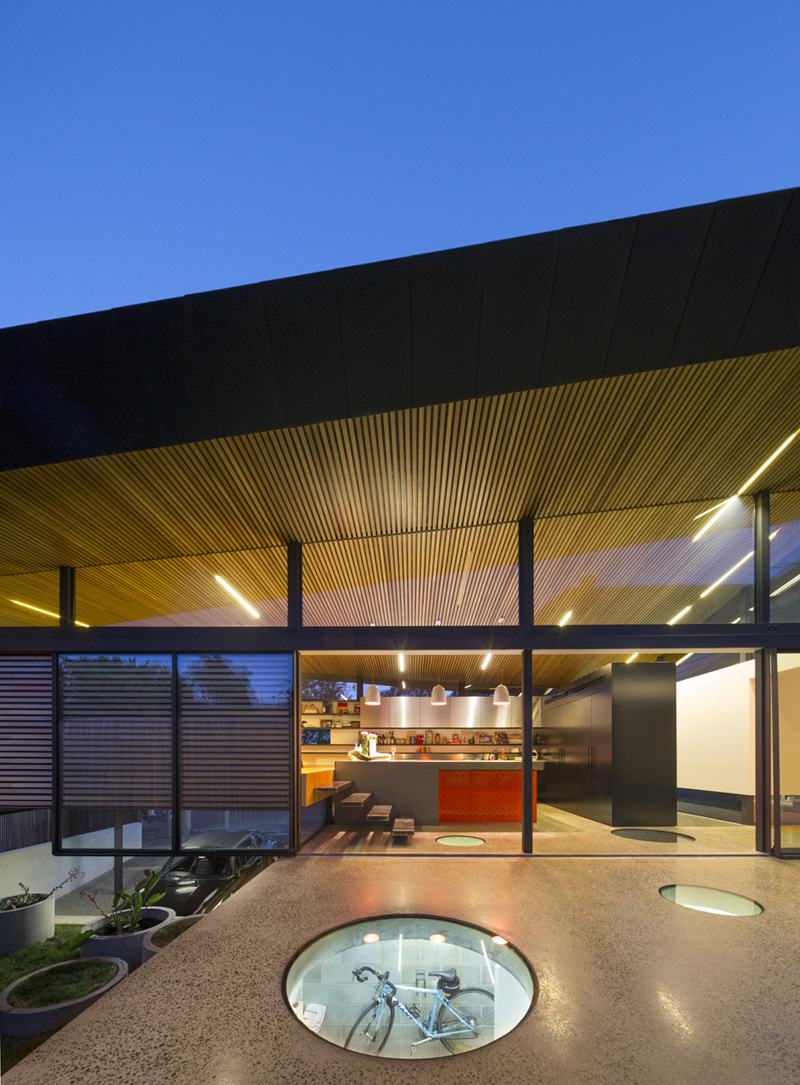 Buried within the concrete box is the rumpus room, wine cellar, laundry, and an additional bathroom. The box is capped with a concrete lid and garnished with strategically placed, trafficable glass skylights. The monolithic form anchors the new building into the side of the hill and is finished internally by the rough reality of building – and being – underground. 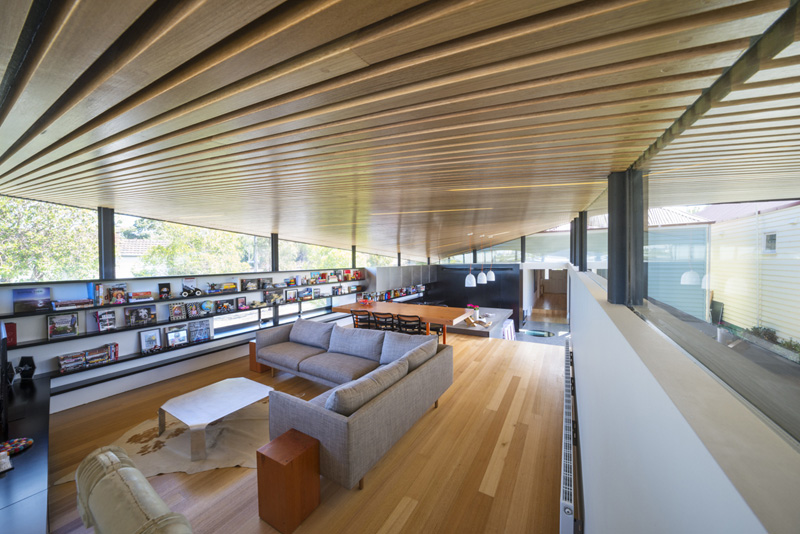 The concrete lid of the concrete box is not only the ceiling for below, but also the floor in both the kitchen and exterior deck. The pivot around which the other spaces are spun, the kitchen serves all parts of the house, while the dining and living areas are tucked up above the garage and closer to the night sky of Melbourne’s city lights. Timber battens clad the extension, wrapping the three spaces together and providing a linear base for the last hovering piece. 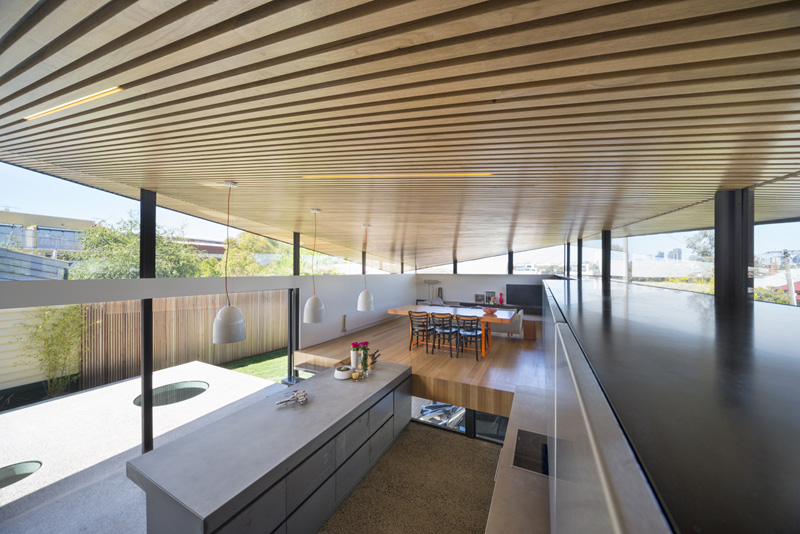 Soaring above the living spaces is the black zinc roof. On the northern edge the roof is pulled up to increase natural light to the northwest corner, and pushed down to the neighbouring building on Hardiman Street on the northeast, so as not to overshadow it. 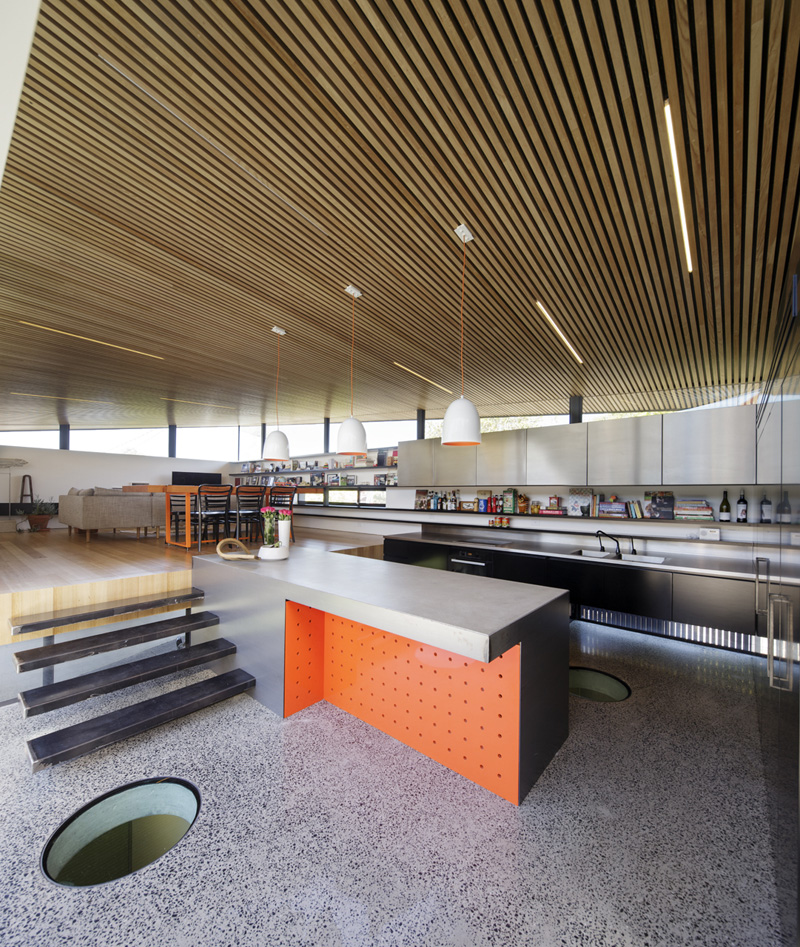 On the south side, the operation is reversed, and the southwest corner is lifted to create a framed view of the city. This simple twisting operation grabs light and views from two corners and anchors the remaining two with rain heads falling to collection tanks. 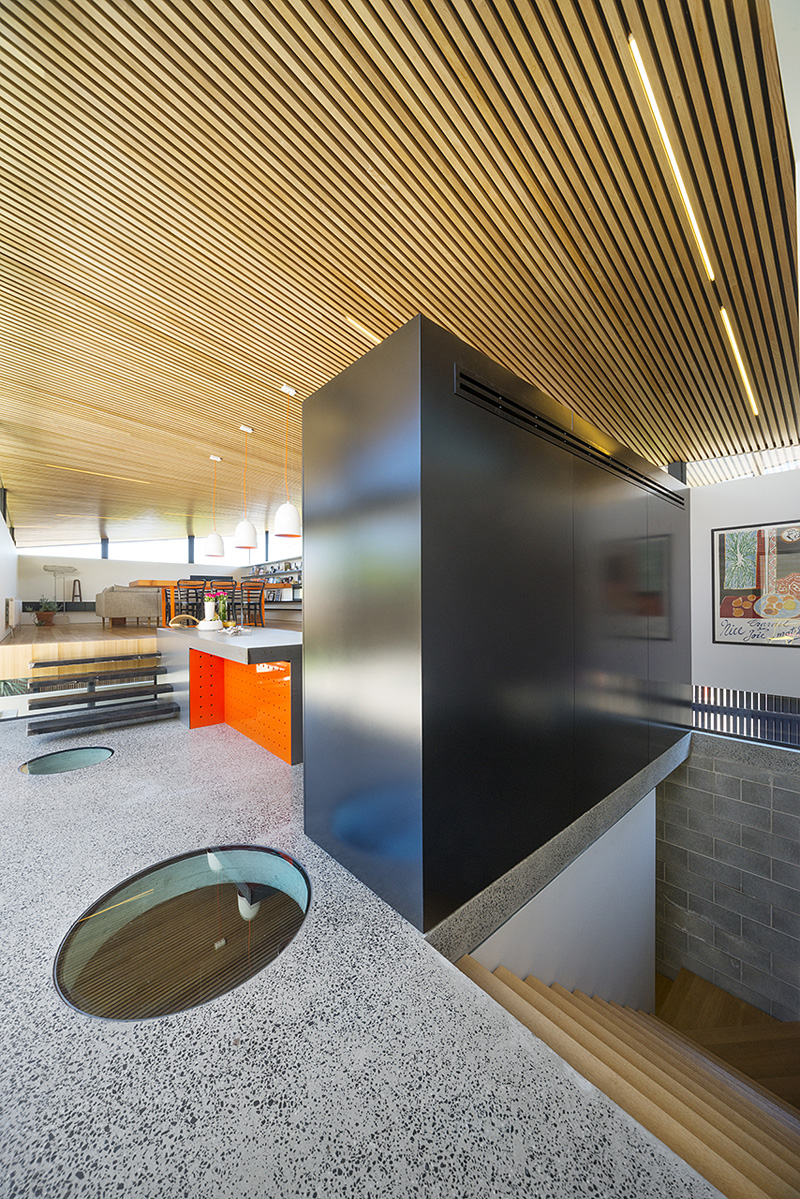 The action and drama of the twist is expressed and amplified on the ceiling below by a series of hand-plugged timber battens. 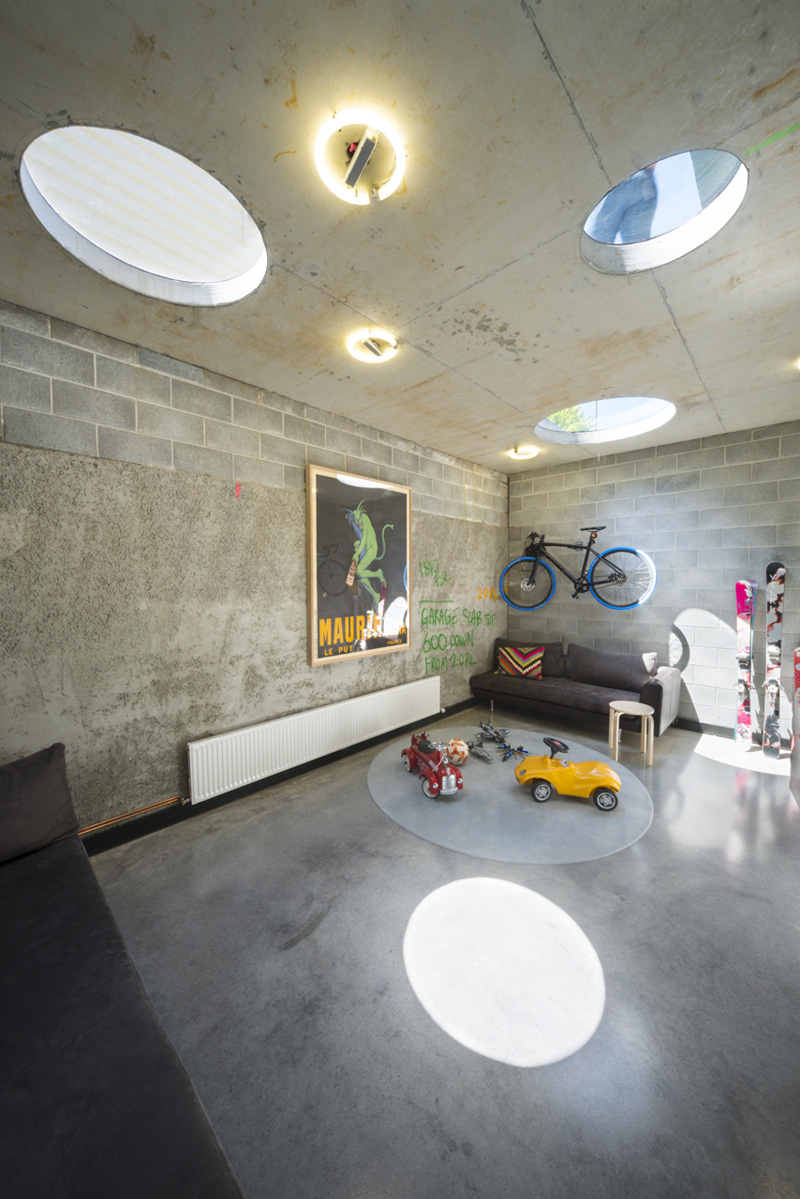