Australian landscape architect Nathan Burkett, has been awarded a gold medal at the Melbourne International Flower and Garden Show for his garden installation named “Equilibrium.”

Nathan Burkett worked with a variety of companies including Woodform Architectural, who completed the Burnt Ash Timber arbor and timber detailing around the fire pit and garden beds. We have included a full list of the collaborators on this project after the gallery. 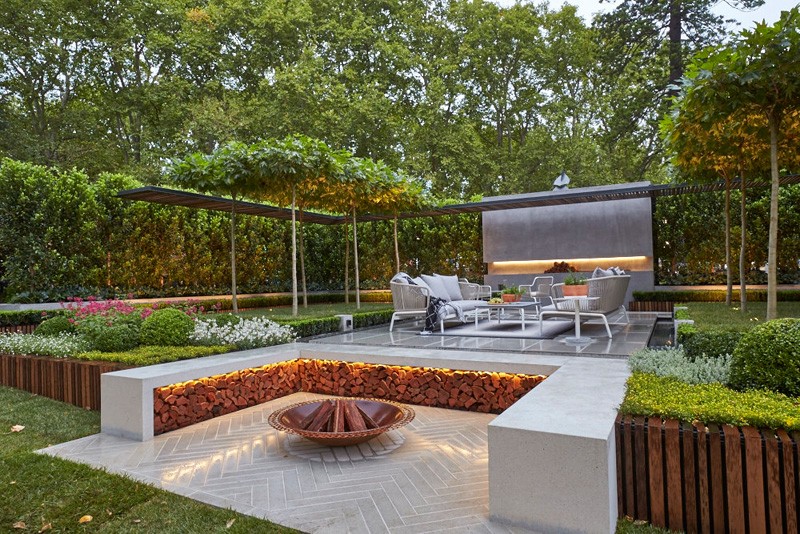 The garden, titled ‘Equilibrium’ has revealed some key new trends in landscaping for 2015 and signals a return to soft, useable spaces where greenery is used in place of traditional ‘hard’ landscaping elements to create structure and symmetry in nature. Nathan Burkett’s in-house construction team was also recognised with the Mark Bence Construction Award. 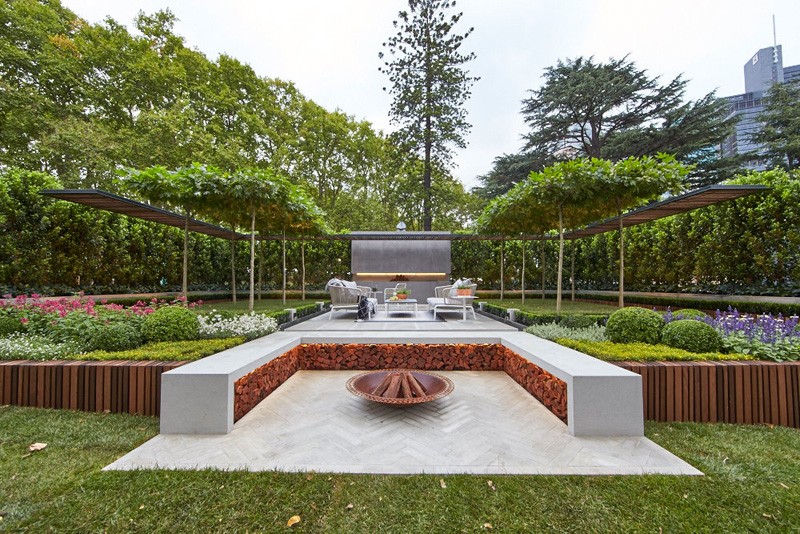 Some of the garden’s key features include a cantilevered arbor which wraps around the perimeter to create an architectural ‘frame’ in which the rest of the garden sits. The garden uses dramatic 3m high Ficus Hillii hedging to frame the garden’s outer borders and create a sense of intimacy in a formal garden setting. 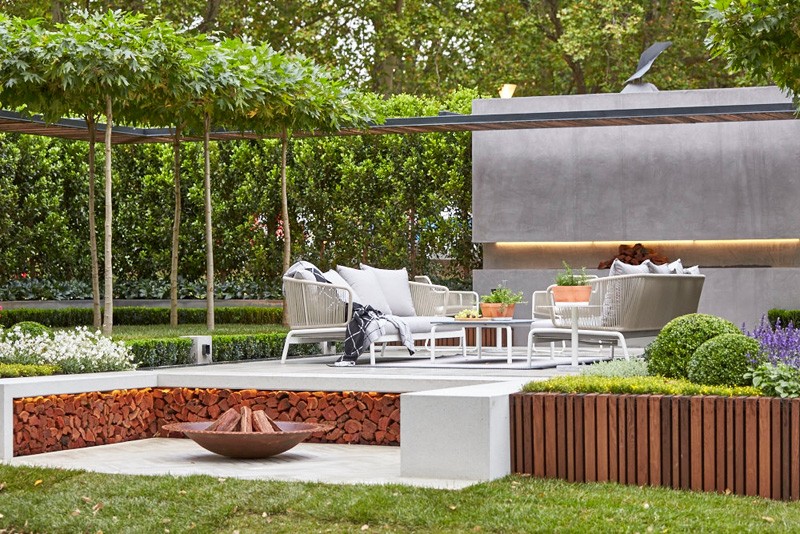 In the centre of the garden a custom-designed fire pit, designed and built by Nathan Burkett himself, is framed by two perennial garden beds which inject colour and fun to break up the formality of the surrounding features. The seating area is paved with intricate stone work which continues along the garden’s base, interspersed with soft lawn areas and a pond which is subtly tiled with Italian glass. 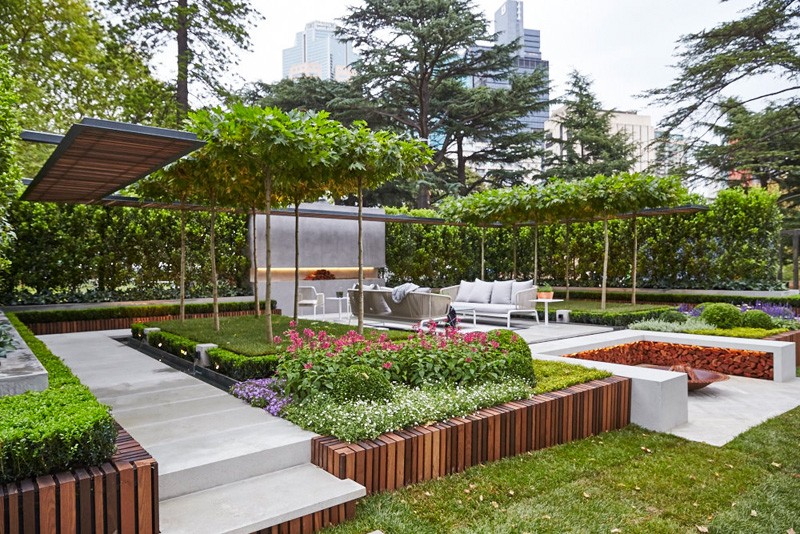 At the garden’s centerpiece lies two ‘living pergolas’, mature deciduous Plane Trees which have been grown specifically by Warner’s Nurseries. These living pergolas have had their foliage coaxed horizontally along a trellised wire, to mimic an organic roof structure. 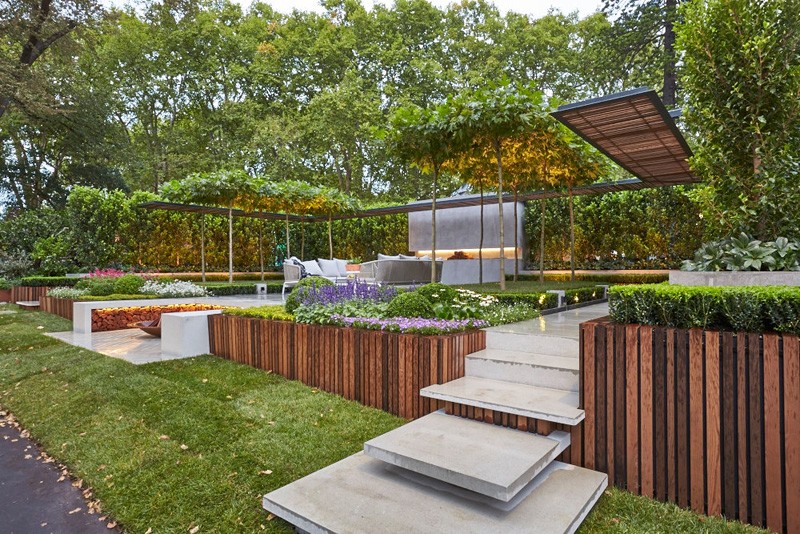 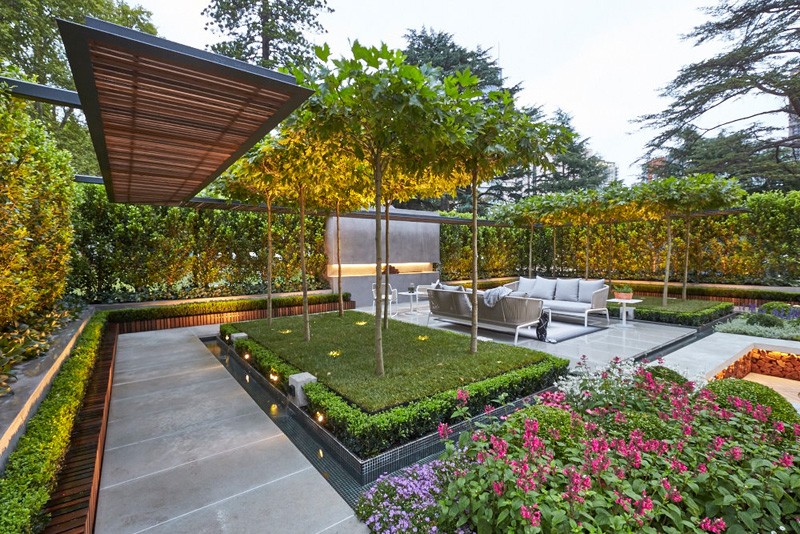 The living pergolas, which stand approximately 3m tall and have been grown over a five year period, represent a return to nature as an architectural centerpiece, using organic material to create the built form, which Burkett says is a key recurring theme in his design.