A New Interior For A Historic Tel Aviv Apartment

Pitsou Kedem Architects have designed the renovation an apartment in Tel Aviv, that was originally designed by architect Yosef Berlin in 1925. 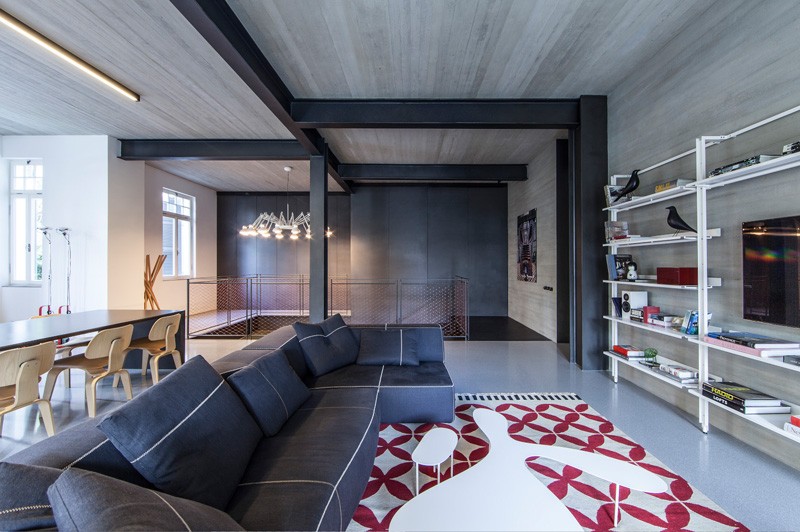 An historic, neo-classic building in the heart of Tel Aviv originally designed by the architect Yosef Berlin in 1925. The building has been designated for preservation with severe building restrictions as part of the Tel Aviv preservation plan. 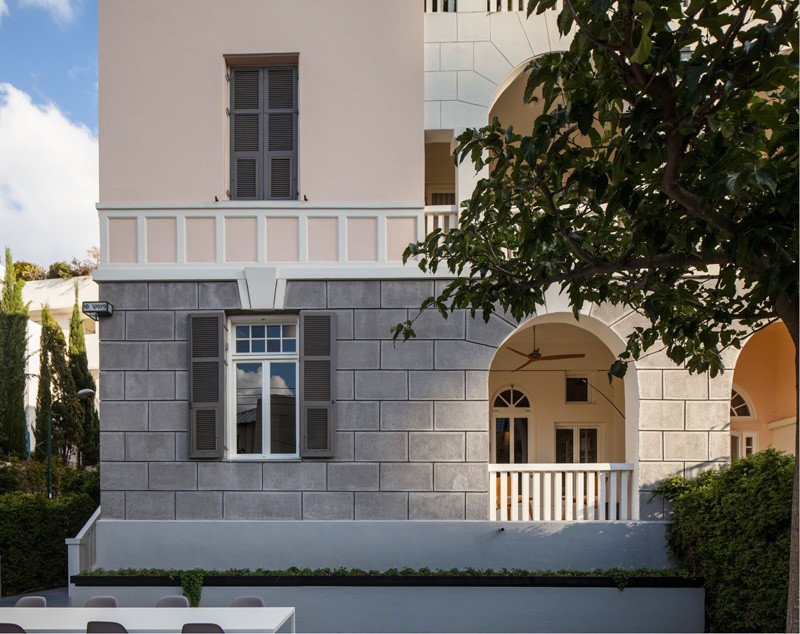 The area, known as the “White City” is the site of Tel Aviv’s founding and was declared a World Heritage site by UNESCO in 2003. The structure itself consists of a rustico ground floor that is the foundation for two additional floors with renaissance style arches. 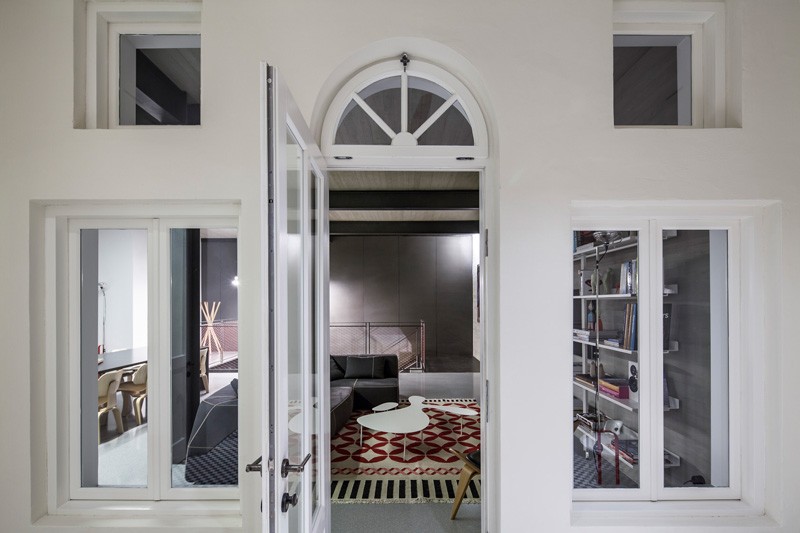 The ground floor apartment we designed was previously the home of Israel’s first Prime Minister, David Ben Gurion which lends historic significance and magic to the building and the apartment. 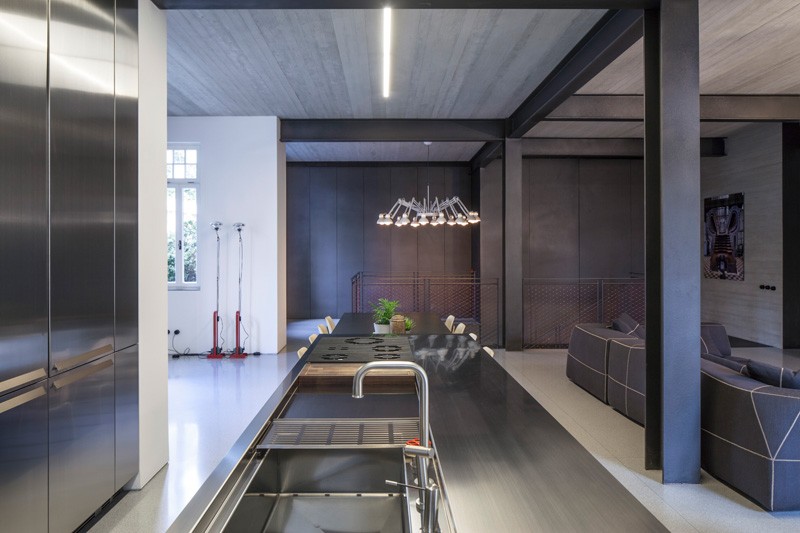 In order to add volume to the space without harming the facade and the historical structure, we designed and constructed a basement floor. 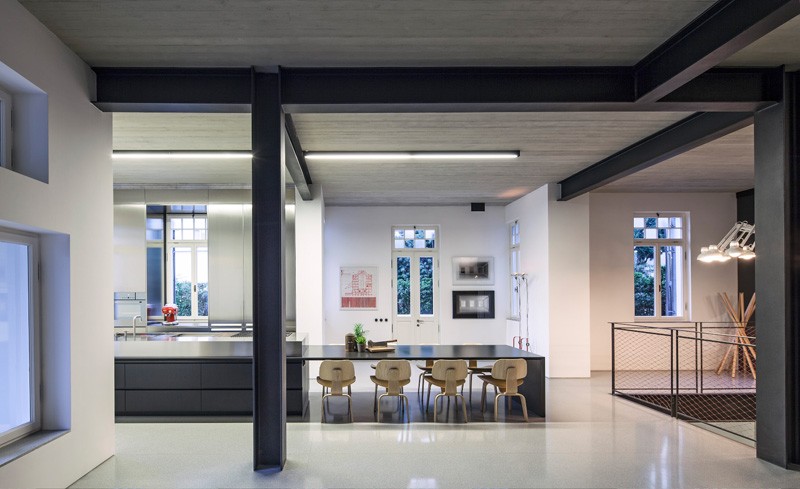 Execution of the work was extremely complex from an engineering point of view and included the suspension of the structure and the apartment’s ceilings from a system of temporary beams and pillars. 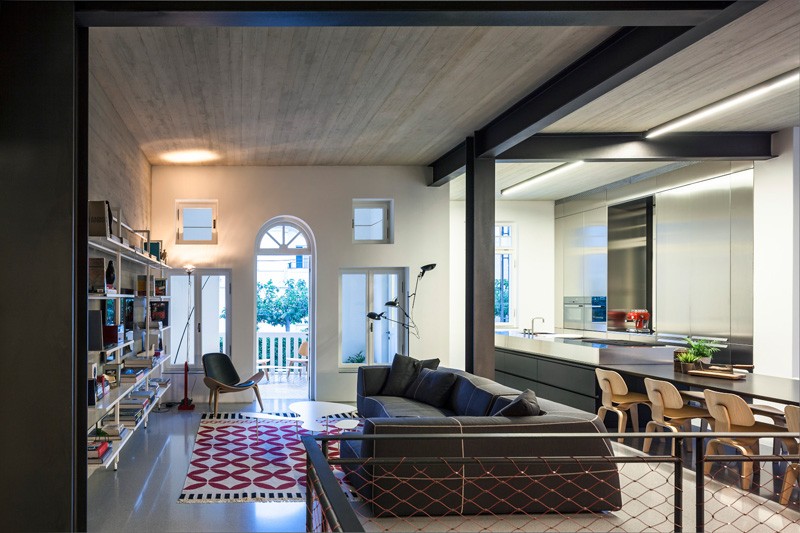 From the moment that the basement was added to the apartment, this provided a new and significant element to the apartment which we exploited to create a large (in relation to the floor area) open, working space between the floors. 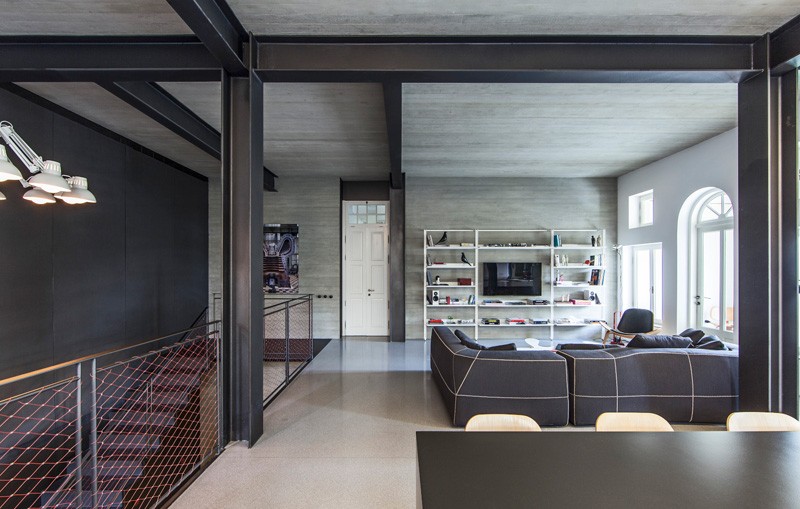 Thus we created both visual and physical contact between the two floors with a new, 6 meter, steel pillar enhancing the powerful vertical line.

Since the construction elements we created were totally new, we took care not to hide them but left them exposed in order to tell the “story” of the renovation. 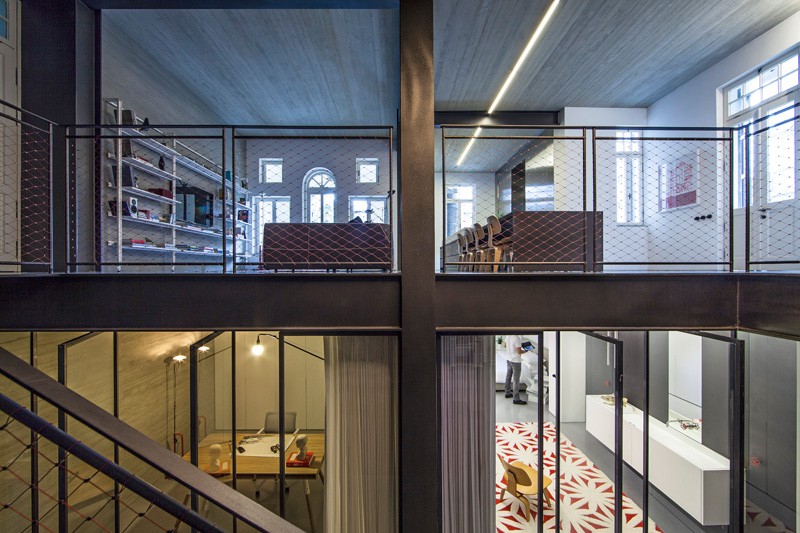 In order to preserve and respect the tradition and the past, the materials chosen for the apartment’s renovation were all raw materials (exposed concrete in walls and ceilings, steel for the beams and pillars, iron for the facades of the closets and stainless steel net for hand rails). 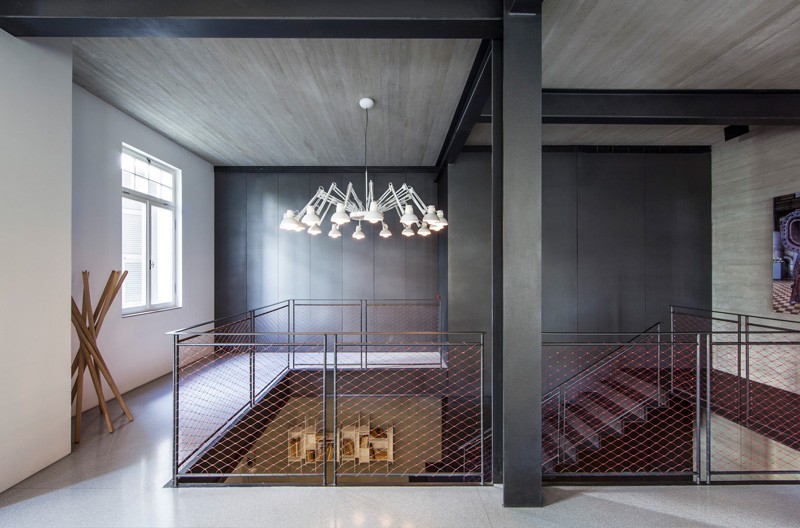 The combination of modern design and the neo-classical structure from the 1930’s enabled the designer to create a world full of contrasts and tensions combined in one project; between elegant and industrial, between raw and ornamental, between simple and complex. Together, they enrich the structure, both architecturally as well as the relationships between the space and those in it, and tell the tale of two periods in one space. 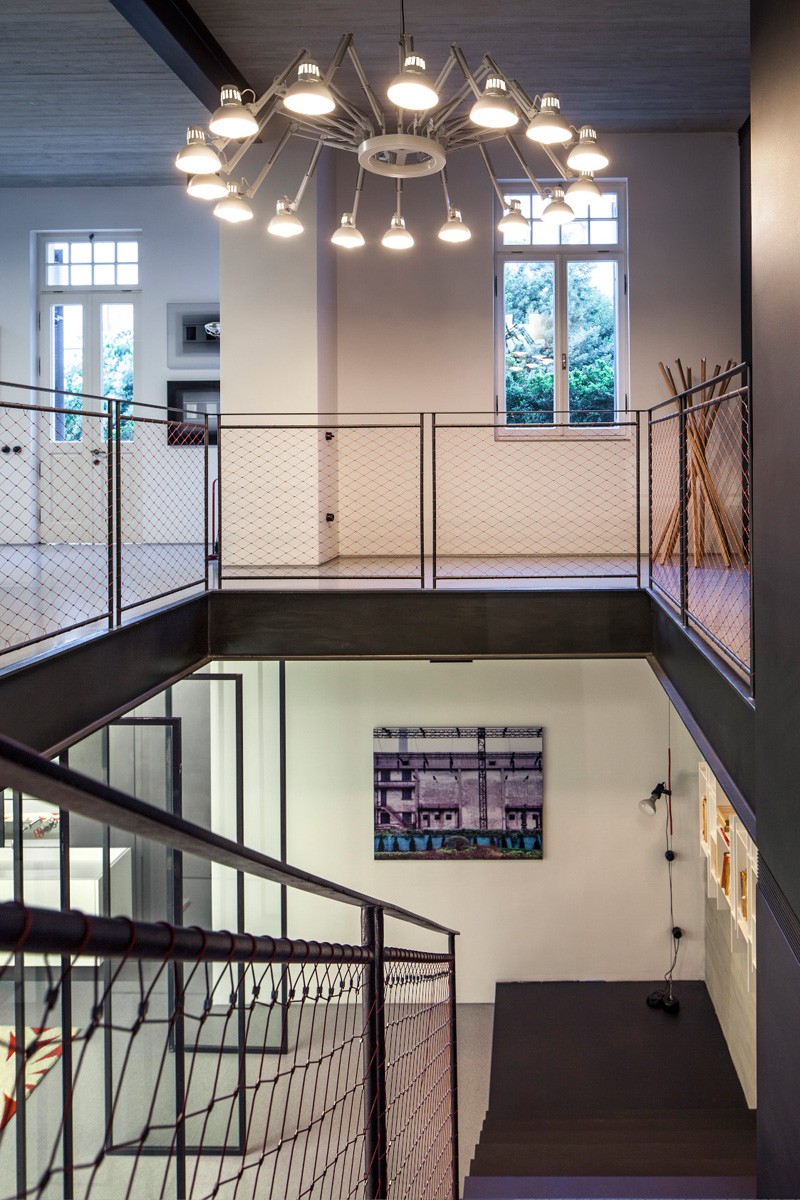 The open balcony, the adjacent courtyard paved in terrazzo just as are the apartment’s spaces, act as a silent and elegant peninsular between the apartment and the noisy, urban surroundings of the outside world.

All the furniture was carefully chosen to complement the common culture that connects between two periods in time. A touch of red paint also symbolizes the combination between rawness and industrial styling and the classical elegance of the apartment’s original period. 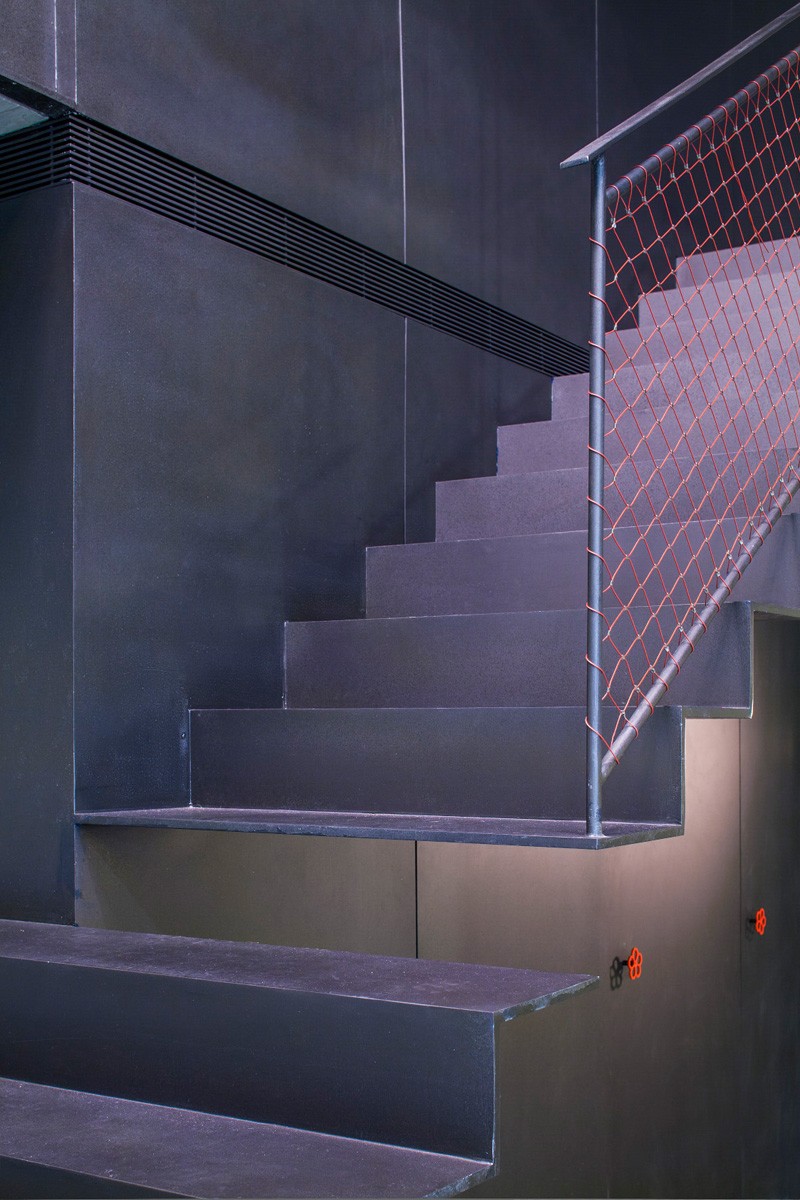 The new space succeeds in exploiting the fragrances of the past, transforming the apartment that is experienced as a contemporary space that that, at one and the same time, succeeds in honoring its tradition whilst renouncing itself, with a bare hint, from the ornamental, neo-classical style. 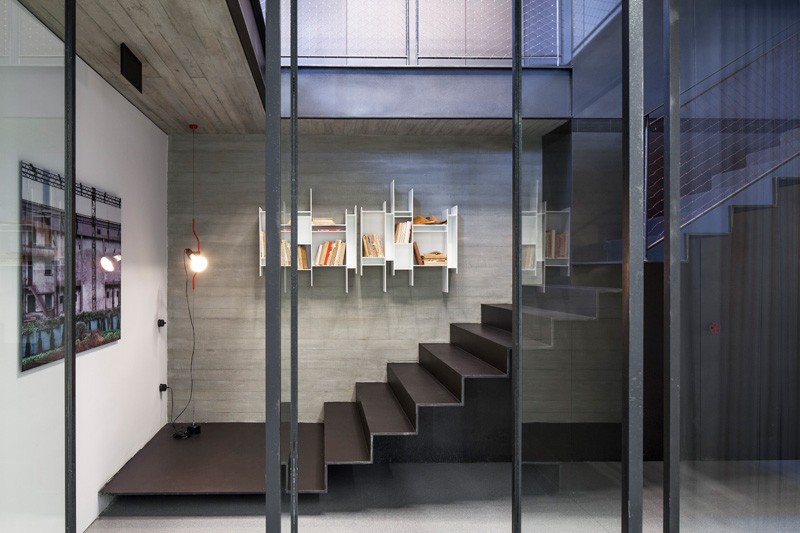 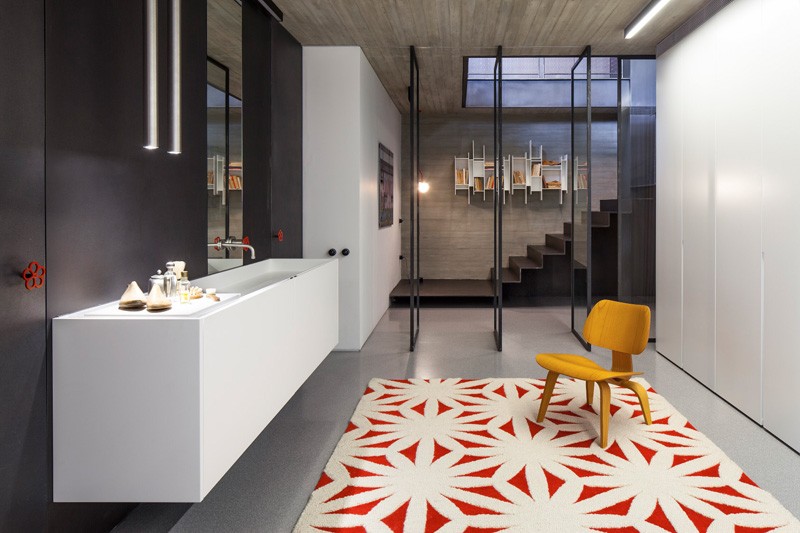