SAOTA – Stefan Antoni Olmesdahl Truen Architects and Antoni Associates have designed a home for a family in Knysna, South Africa. 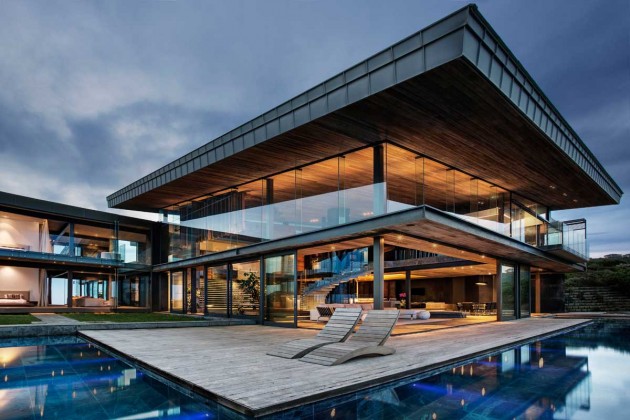 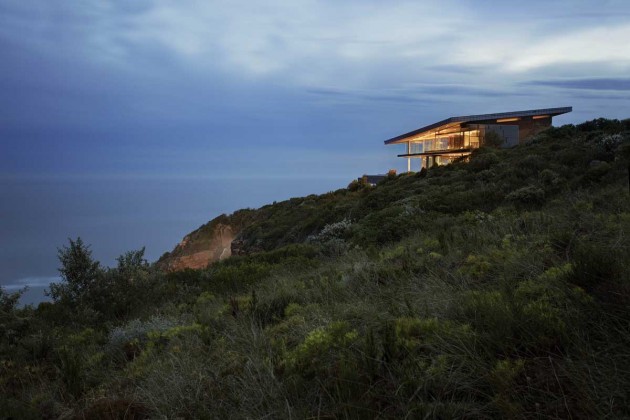 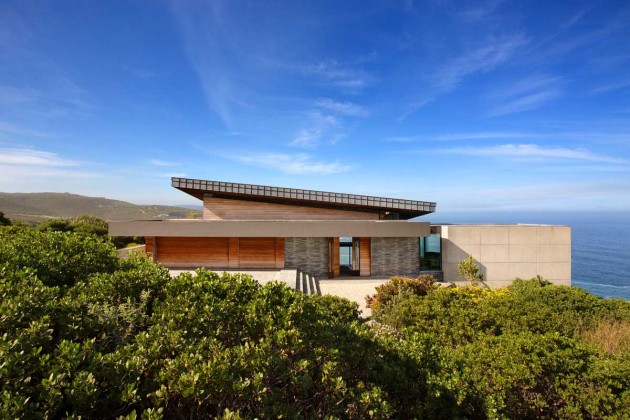 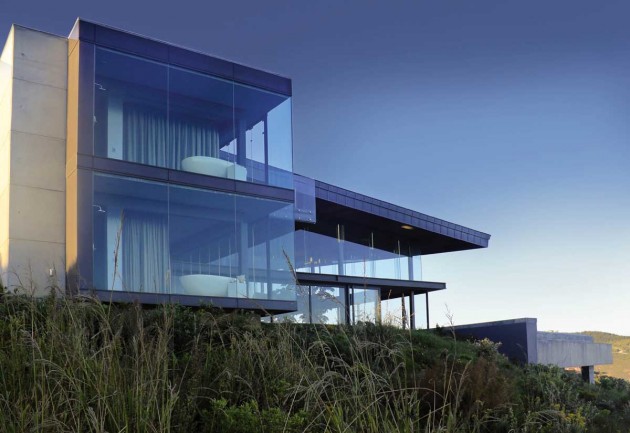 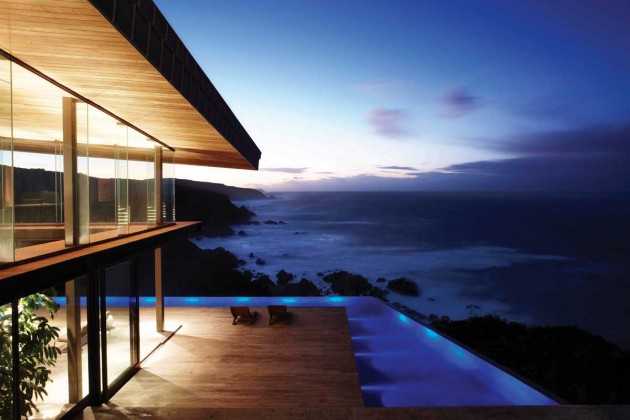 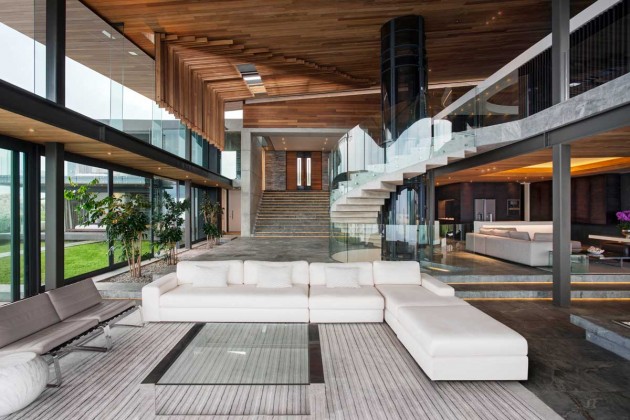 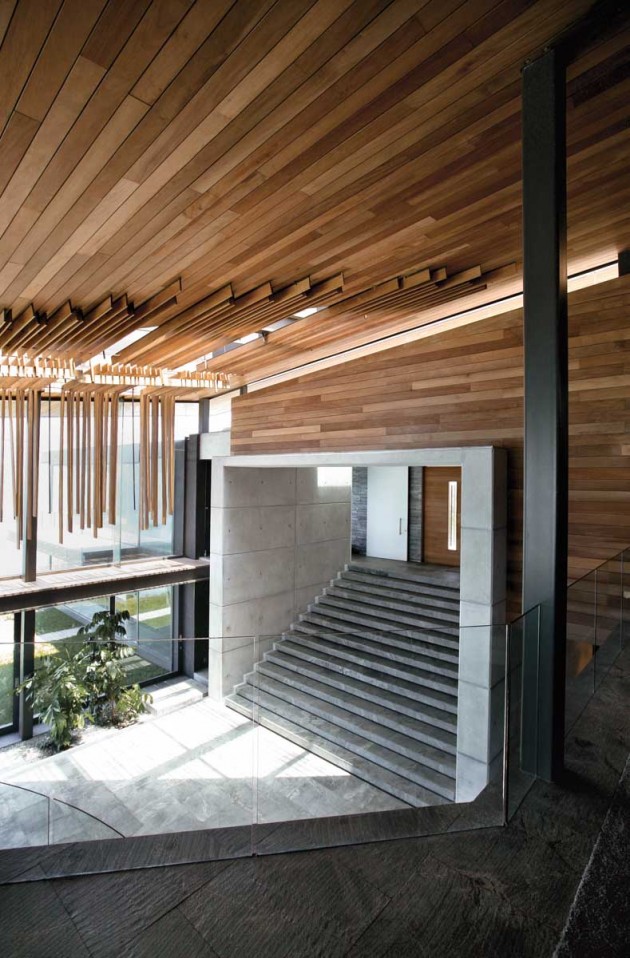 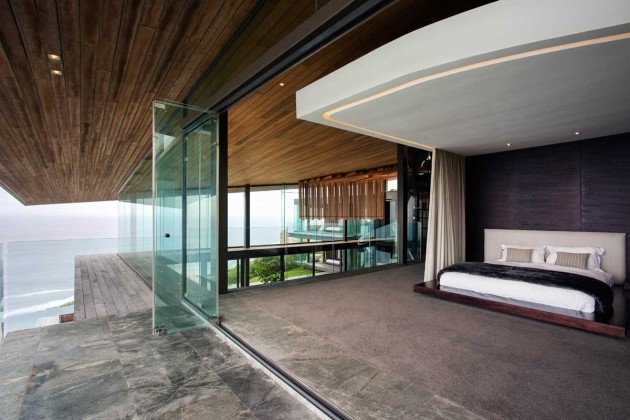 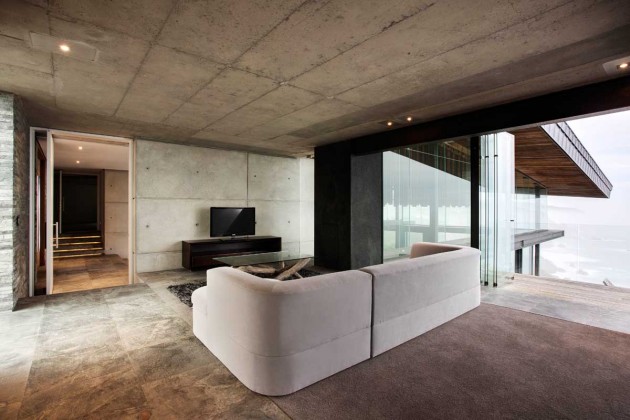 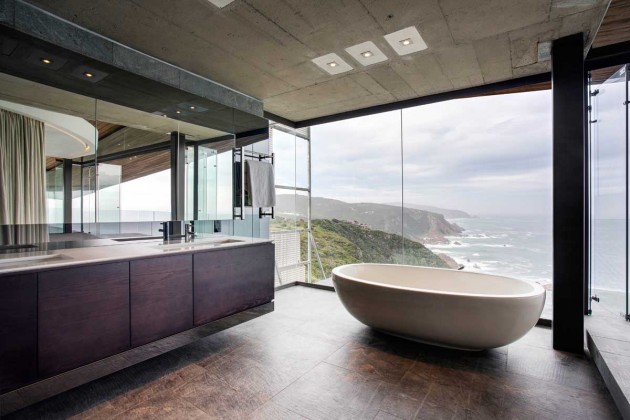 Brief
“The brief was to create a home for a Johannesburg based family that could eventually be used as a family home but would initially be used for holidays. The site enjoys spectacular views and it was important that the connection to these views was maximised,” says Greg Truen, Project Partner.

Approach
The primary idea driving the design was to create a single living space with a single roof element floating over it that responded to the slope of the site. The roof is set at a sufficiently high level so that it is out of one’s line of sight from the living space, creating the illusion that one is sitting in the landscape rather than in a room looking out into a landscape. A large triangular cut-out in the roof reinforces a connection with the sky.

A very detailed solar analysis was done of the building to try and get direct sun (other than the rising East sun) out of the building. As a result, a midlevel horizontal sunscreen was added to the double height glass façade and the skylight is protected by a timber screen that hangs into the space to mitigate the scale of the double volume space. Care was also taken in selecting performance-glass that would minimise the impact of direct sun.

The building is approached from the North West at the top of the site. This elevation is low and horizontal. The choice of materials, off-shutter concrete, Rheinzink roofing, timber cladding, stone and exposed aggregate will allow the building to fade into the landscape as it ages. The building is orientated towards the view; one enters at the upper level of the double volume looking towards the ocean. The contrast with the external approach is very powerful. A grand stair pulls on onto the living level which holds the kitchen, dining room and living room. To the right the landscaping is pulled into the building, blurring the distinction between the inside and the outside.

A spiral stair connects the living level to a private lounge and the master bedroom on a mezzanine level. This stair was conceived as a sculptural element in the large volume to again mitigate the scale of this space. This spiral drops through the floor to a lower level which houses a guest bedroom, a home theatre and a living room.

An L-shaped extension to the South West houses the two children’s bedrooms. The bedrooms have curved curtain tracks that create very intimate sleeping spaces at night which contrast with the very open daytime character. Water is a critical issue in this part of the world and a huge underground cistern was created under the garden terrace to harvest rainwater to minimise the houses’ reliance on the municipal water system. A heat pump and water based under floor heating system uses less energy than would ordinarily be required for a house of this magnitude. The concept behind the landscaping was to reinstate the fynbos and let the building float over this restored surface.

“The interiors are uncluttered and reflect the easy living requirements of the clients. Spaces are sparse, and have been furnished minimalistically which emphasise the strong architectural lines and volume of the architecture. The furniture is modern, and a number of bespoke pieces were sourced from the designer’s retail outlet OKHA. A neutral palette of ivory, stone and shell complement the natural architectural timber and concrete finishes selected throughout,” says Mark Rielly of ANTONI ASSOCIATES.