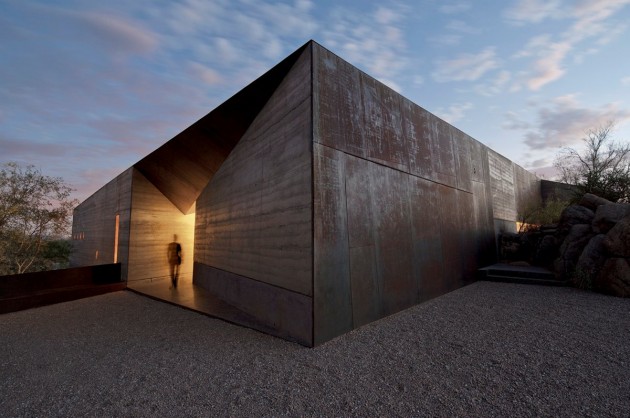 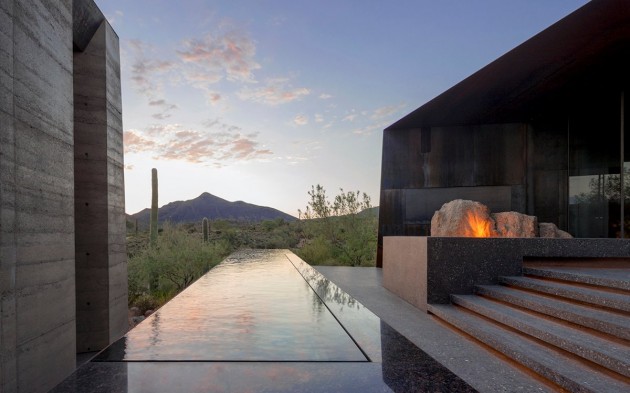 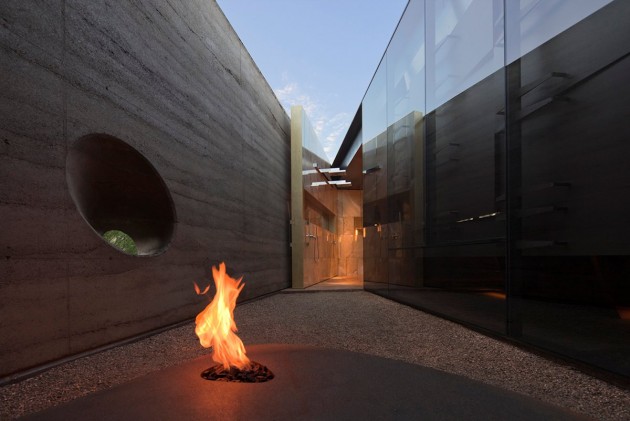 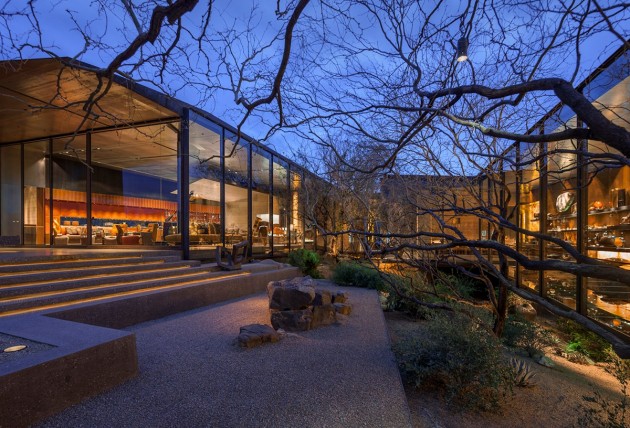 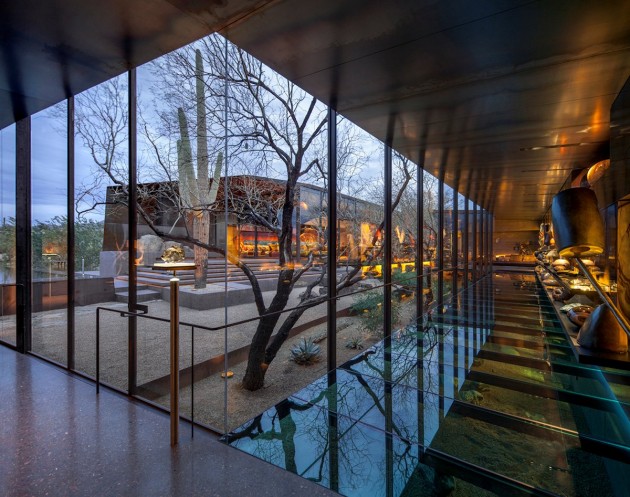 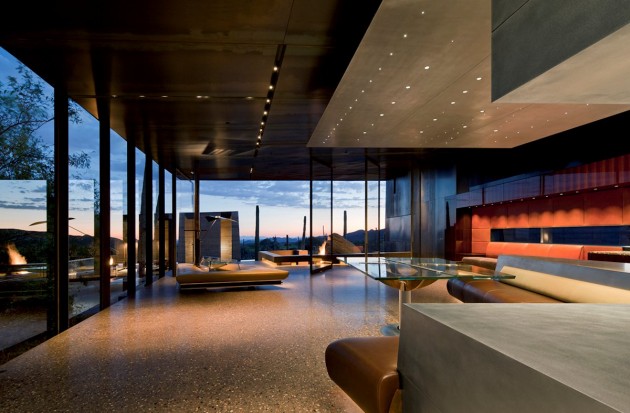 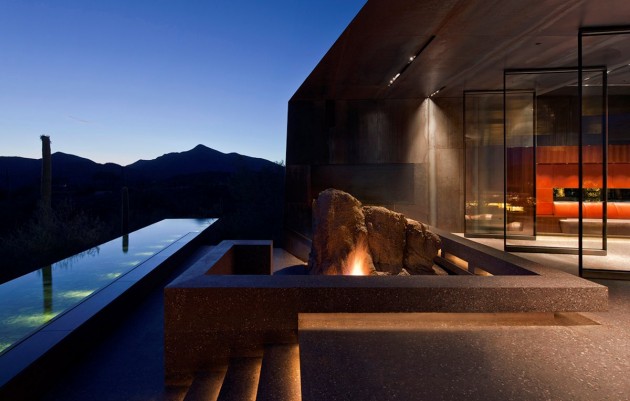 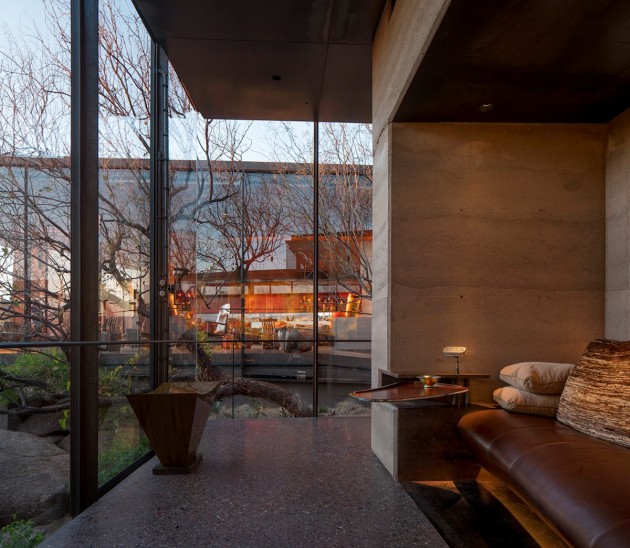 The site is a peninsula of granite outcroppings and towering Saguaro cacti surrounded on all sides by deep perennial desert washes except for a single spit of land affording access from an Ocotillo studded ridge above. The building site, further down a long private drive, levels out toward the west into an edge condition dominated by an expansive vista – layers and layers of distant mountain ranges – that in the evening seem to epitomize the drama of the Arizona Sunset. Due to the elevation of the site beneath the community’s gaze and the entry gate at the road it became important to us – to recede the house as a deep shadow – into the depth and complexity of the desert floor below.

When your feet begin to move across this delicate floor you feel as though you have entered a Zen garden. At the eastern edge of our garden, the sound of water is heard trickling – remarkably even in our Desert – for half the year through a fractured decomposing granite boulder field and a rush of cattails. At the highest point of the site we took delight in a large arrow-shaped granite boulder pointed west, a peculiar group of volcanic rocks and a large multi-armed Saguaro between. Standing in this place for the first time, we felt immediately compelled to hold and preserve a microcosm of this precious primordial desert landscape including an equally infinite piece of its indomitable sky.

The form for a serene desert courtyard slowly began to emerge. The courtyard concept intrigued our client as the comforts it offered – air, light, privacy, security, and tranquility – were the ones universally desired in a home. For us, it also offered the chance to corral a piece of ancient time unencumbered by the recent development and to do so with a form that evolved from the surrounding landscape, its natural power, its geologic mass, its delicacy, one which would feel as though it had always been there. We began to ask the question “whether the courtyard walls could literally grow from the site itself, from the site excavation with no import no export required?”

We discovered through sample testing that the soil from our site was uniquely suited for rammed earth, one of the oldest methods of construction. Wooden molds held wide apart accept 3 foot high layers of earth in lifts, then a dry mix of dirt and cement (3-8%) is compacted down with pressure pounding into a 12 inch layer of dense thermal mass, lift by lift until the height of the wall is achieved. It requires a stable footing at the ground and a hat for protection from rain and erosion. We raised the requisite foundation just above the flood plane as a base and then expanded it into the courtyard as a piano nobile, beyond the thick perimeter earthen walls, as the most elemental form from which to view the expansive qualities of land and sky – a massive land based land scaled – plinth.

The plinth was cast in place with one material throughout such that a wall, a floor, a ramp, a step, or a bench could be experienced as part of one contiguous stone. The Verde River eventually connects to the Salt River, which collectively tumbles some of the worlds hardest aggregate through the lowest point of the valley, where along with sand and cement, it is harvested for locally produced concrete. A “highway concrete mix” with oversized 1 ½” aggregate was specifically selected for this project and mixed with a small percentage of the earth pigment – raw umber. We wanted to work the surfaces of the plinth in order to reveal the composite qualities of the material, sand, conglomerate gravel, pebbles, broken stone, in a cement matrix, and consequently a window into the geologic time of this place.

The overall height of the landform follows the design guidelines and therefore the ground at precisely 24’ above natural grade in a segmented monocline that spirals almost imperceptibly up and around and out where the solid mass of the courtyard form opens up to the distant west. In conjunction with this geometry, the outsides of the earth and concrete landform are faceted inward 3 degrees from vertical. The hat required for the earth walls protects the monolithic courtyard form as a contiguous part of a faceted shadow that begins at the outermost edge of the monocline and continues inward toward the inner court where it stops just short of itself inscribing an irregular frame for the sky.

Mass, Hollowed Mass, Faceted Mass, Fissured Mass, Mass that cracks open and hinges apart informed how we proceeded to give this home its defining qualities from the courtyard plan, to the split-massing, all the way down to the fittings and fixtures that one touches with the hand or the eye. For instance, the millwork is volumetric only revealing contents within when a contoured bronze void is touched with the fingertips allowing the mass to be gently cracked open. Long fissures in the mill-finish steel plate ceiling reveal light while maintaining the quality of nothingness at night. Mass and the improbability of delicacy discovered within it, is what gives the Sonoran Desert its remarkable presence. As our clients and their guests move into the mass of this landform into our Engawa, we hope they will always rediscover with a hint of surprise the preciousness of things.