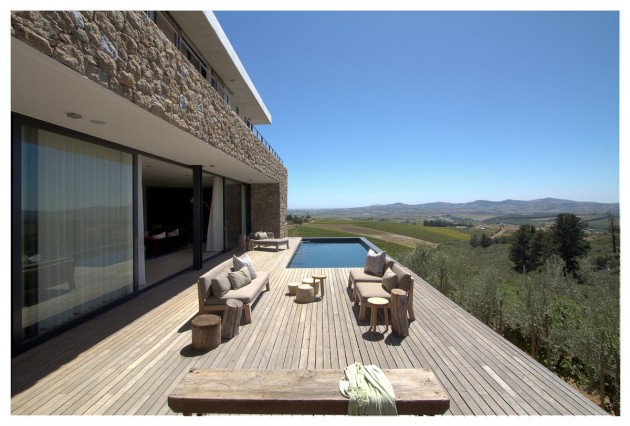 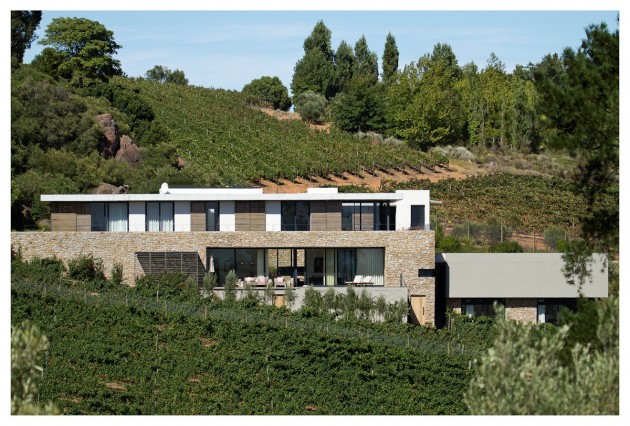 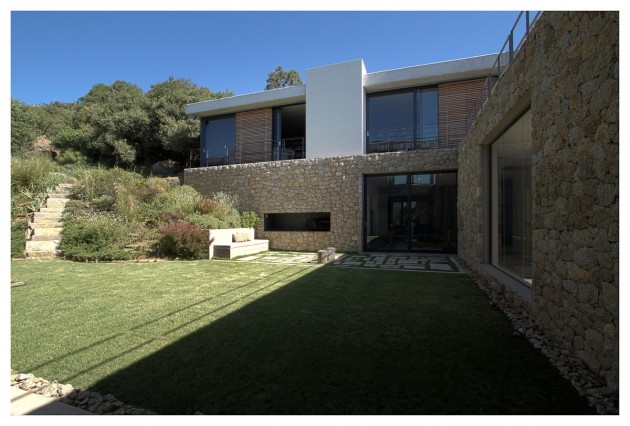 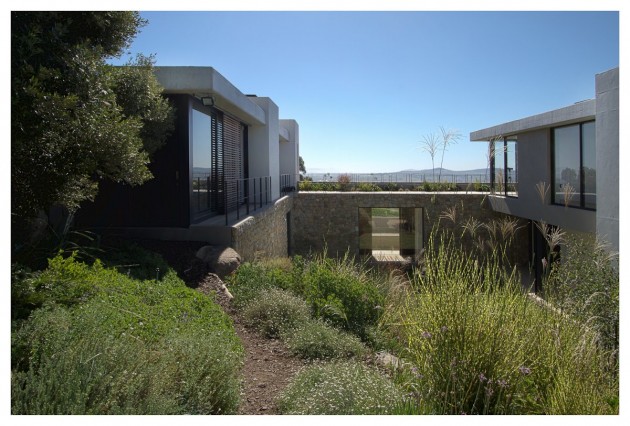 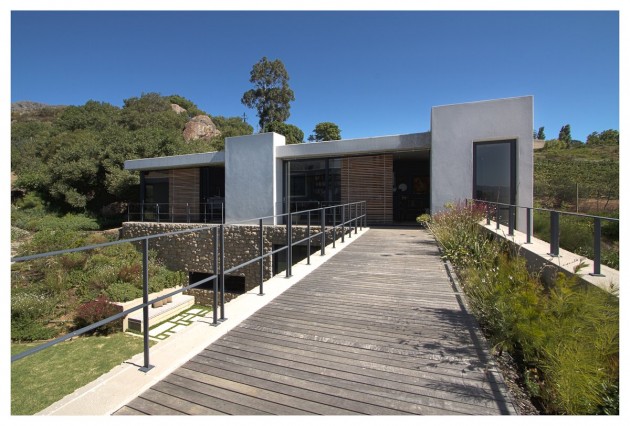 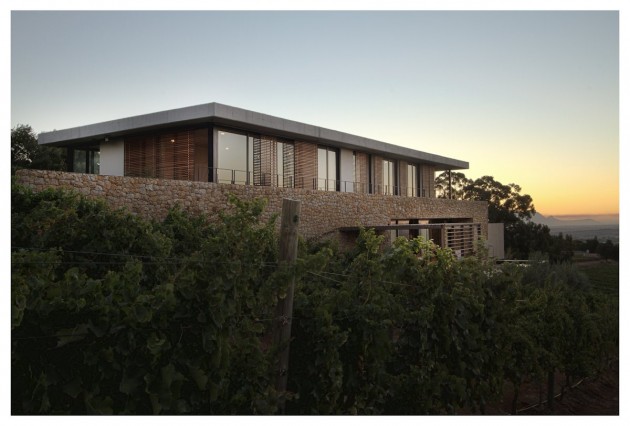 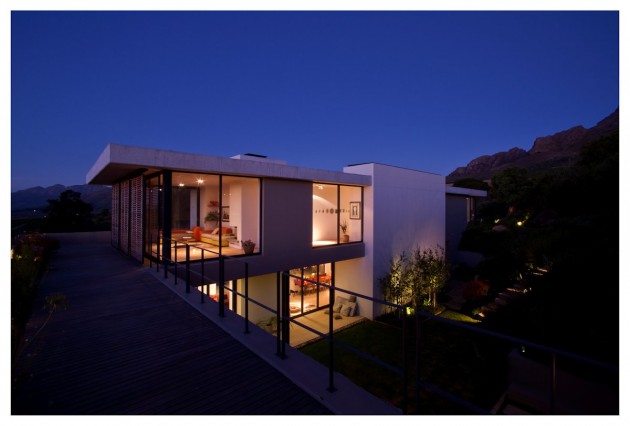 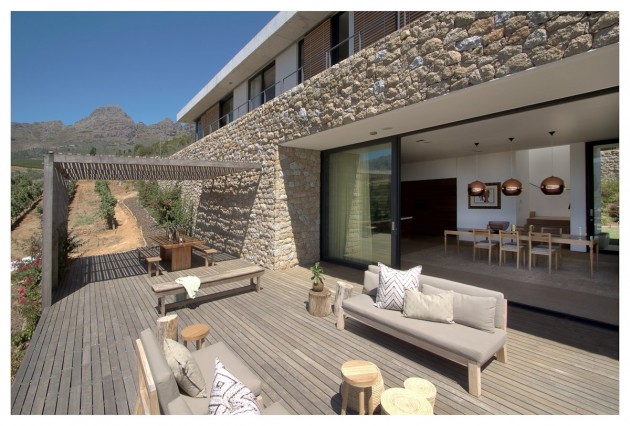 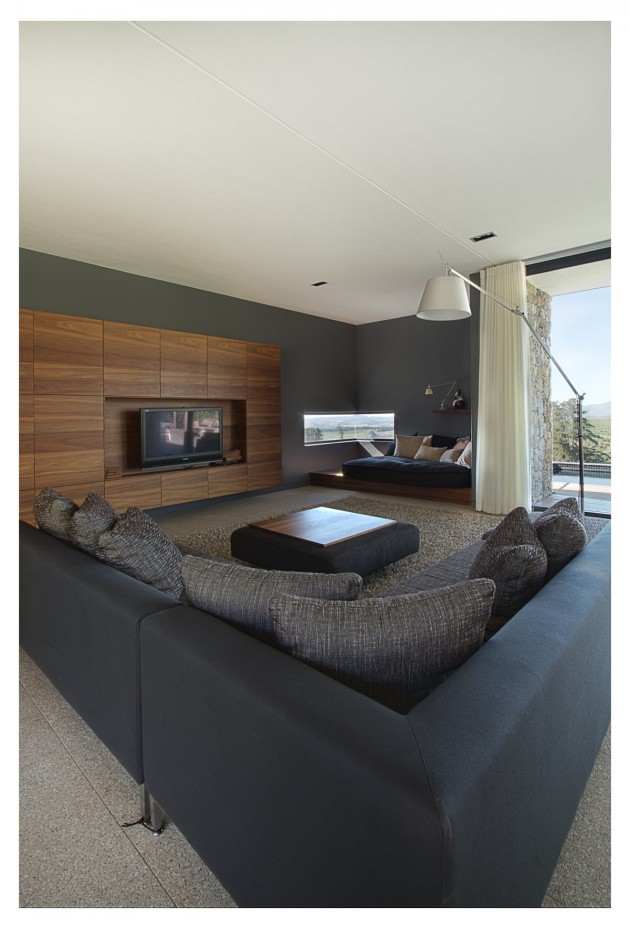 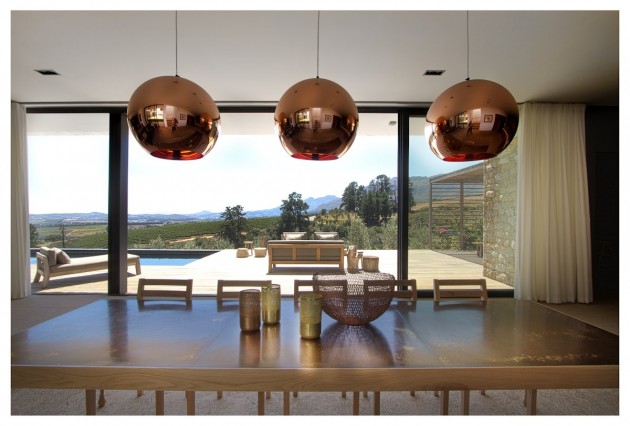 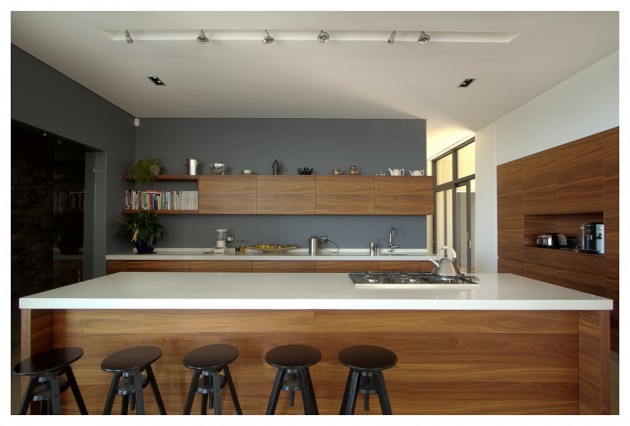 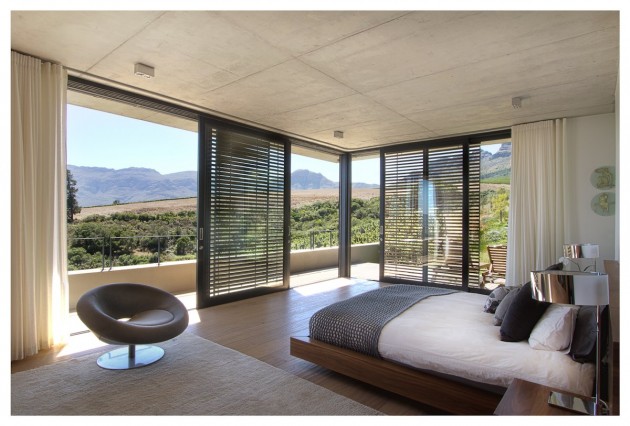 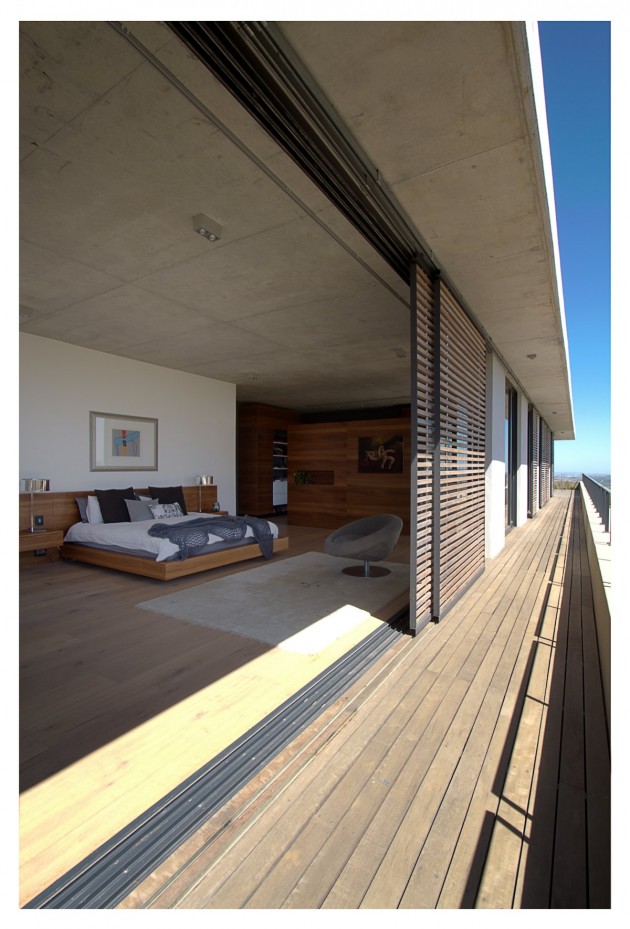 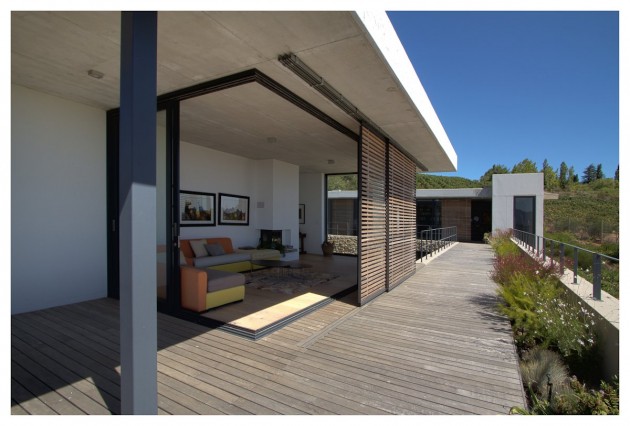 Situated on the slopes of the Helderberg Mountains in Stellenbosch and nestled between rolling vineyards, a koppie (small granite hill) and a river below, Hillside is simultaneously arresting and juxtaposed as fits flawlessly into its surroundings.

You approach the house up a steep driveway meandering through the vineyards. The driveway and the forecourt are a modern interpretation of a traditional farmhouse. This is characterised overall by the planning of the house’s location but also more specifically by the gravel driveway, expansive forecourt, drive-in open garaging reminiscent of a barn and water feature evocative of an animal’s drinking trough. This modern drinking trough is then fed by a modernist architectural waterspout from the roof of the house.

These farmhouse characteristics are not just visual either. Other senses are also stimulated: your scent is stimulated by the smells of the farmlands and rural surrounding as is your auditory sense when you hear the gravel beneath the car’s tires.

There is a genuine sense of arrival every time you visit Hillside.

Access to the front door is gained from a double-sided staircase from left or right of the gravel arrivals courtyard. This short stairway is a nod to the Colonial influence of traditional Cape vernacular typical to architecture seen in the Cape (many buildings in and around Cape Town like The Castle of Good Hope, the City Hall and Tokai Manor House, for example, boast this kind of double-sided arrival staircase).

As visitor – and homeowner – you are fully aware of the amazing setting but on arriving within the farm yard style forecourt the scale of the house changes from a 3-story to a double volume dwelling – so you don’t really get a sense of all the floors and levels.

Beyond this point it is by no means farmhouse, well not in the traditional sense of the word anyway.

Before walking up the steps to the solid timber double front doors you also have the choice of going downstairs to the guest suites (that are currently being used by the home owner’s older children when they’re not at university).

A repetitive architectural feature of the house is the many stacked granite stone walls. Most of the stones for these have been harvested from the site. The front door is also situated within one of these granite feature walls. Before entering the house one has no idea what to expect on the other side – it’s a kind of tardis with unexpected treasures beyond! As you walk through the threshold you are immediately greeted by a giant picture window showcasing the inner courtyard around which the home is designed and the koppie (small granite hill) to the rear of the house. The koppie (small granite hill), as with the rest of the garden, boasts local fynbos and indigenous flora and a kitchen garden to the side.

From the home owners:
We wanted a home that merged the inside and the outside and that gave us beautiful changing visual cameos wherever you looked. Our architect managed to masterfully capture our need for simplicity, nature and a very serene ambience that is then offset by our somewhat mad and effusive large family.