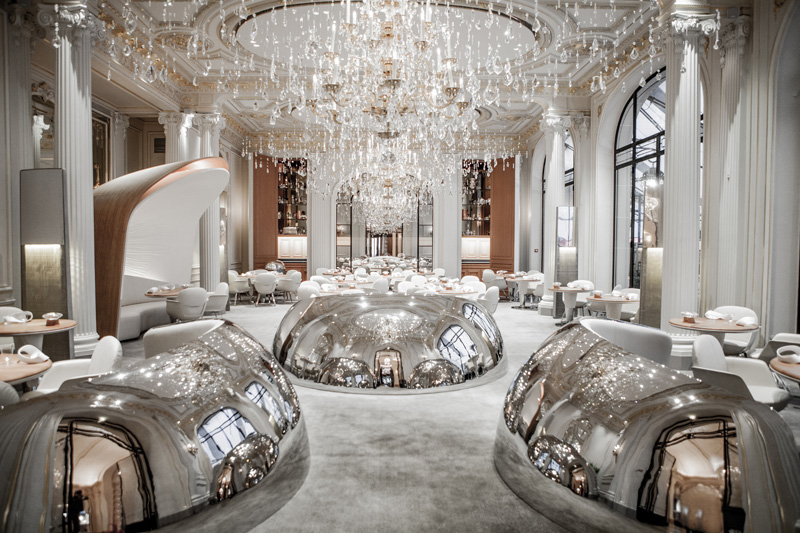 Design studio Jouin Manku have designed a new look for the restauarant at the Hotel Plaza Athénée, located in Paris, France. 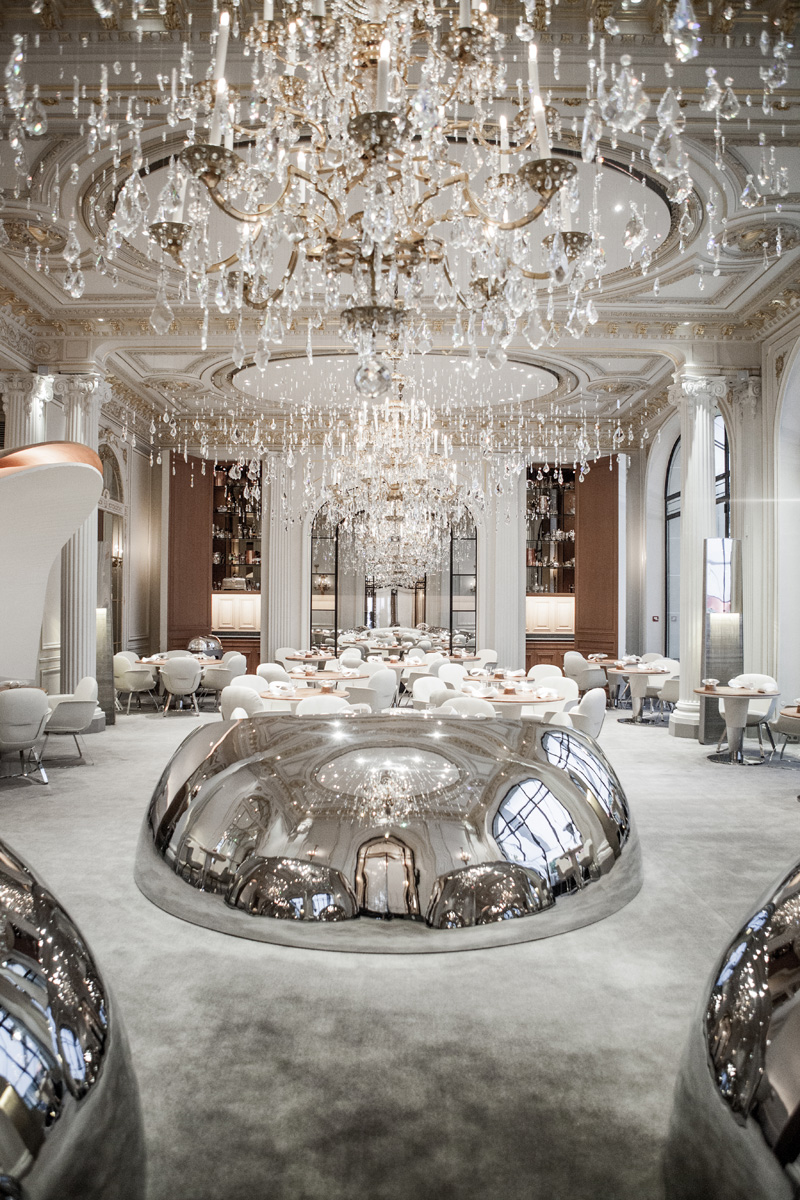 To create a brand new look for the bar and restaurant at the Plaza Athénée in Paris, François Delahaye and Alain Ducasse called once again on the talents of the Jouin Manku design studio, entrusting Patrick Jouin and Sanjit Manku with the interior design of these two spaces. This is the continuation of a longstanding relationship: Patrick Jouin had already worked on the bar and restaurant here on three separate occasions (2000, 2001, 2004), even before his partnership with Sanjit Manku. 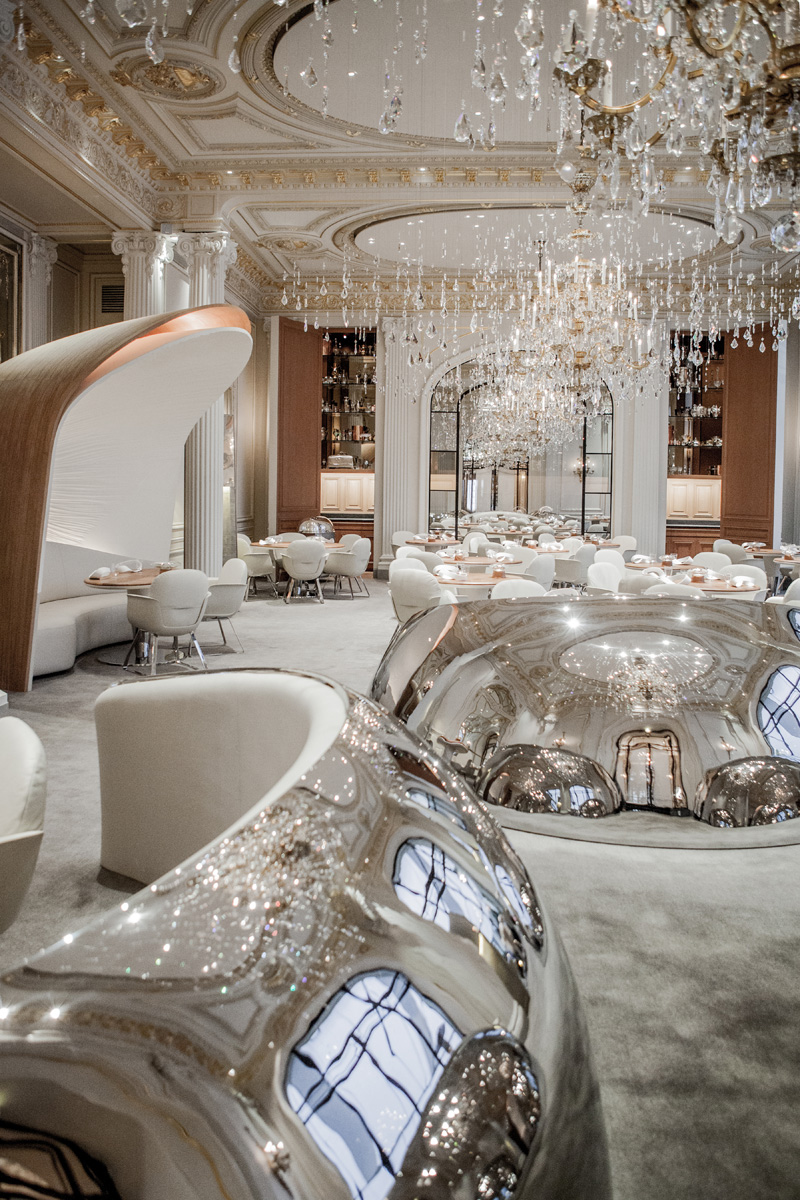 In 2000, his audacious, contemporary approach propelled the Plaza Athénée bar into the list of the world’s most fashionable addresses. In the same way, his sleek decor for the Alain Ducasse restaurant, a majestic interpretation of traditional design codes, has proven highly influential. 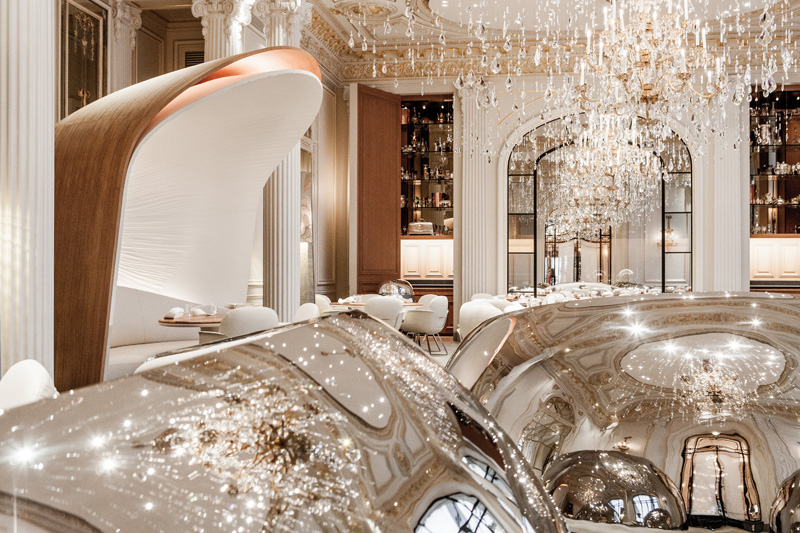 In 2014 the idea was to push the boundaries even further and propose a totally new vision for these two spaces. Patrick Jouin and Sanjit Manku have conceived a project full of fantasy and wonder, featuring key architectural elements that showcase the savoir-faire of numerous craftspeople. 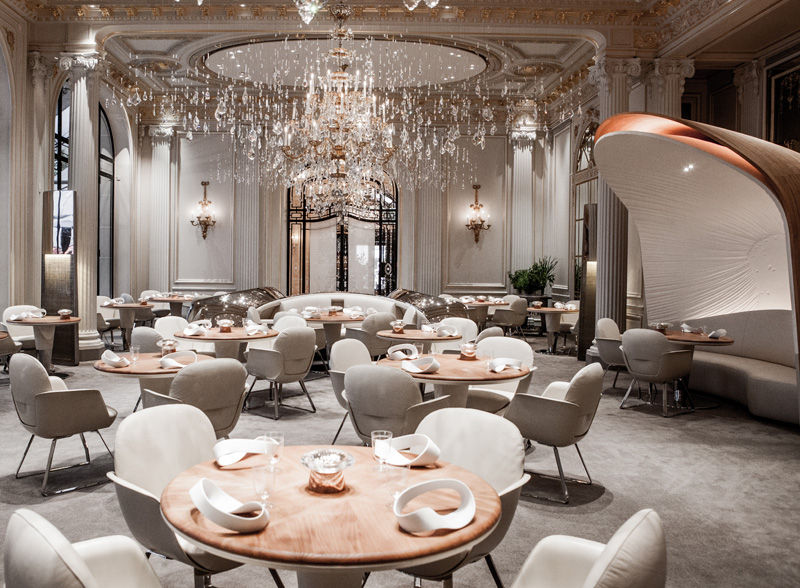 For the Plaza Athénée, Patrick Jouin and Sanjit Manku worked in a way similar to the great fashion designers by surrounding themselves with the most talented craftspeople to make every detail of the bar and restaurant a part of the vision. 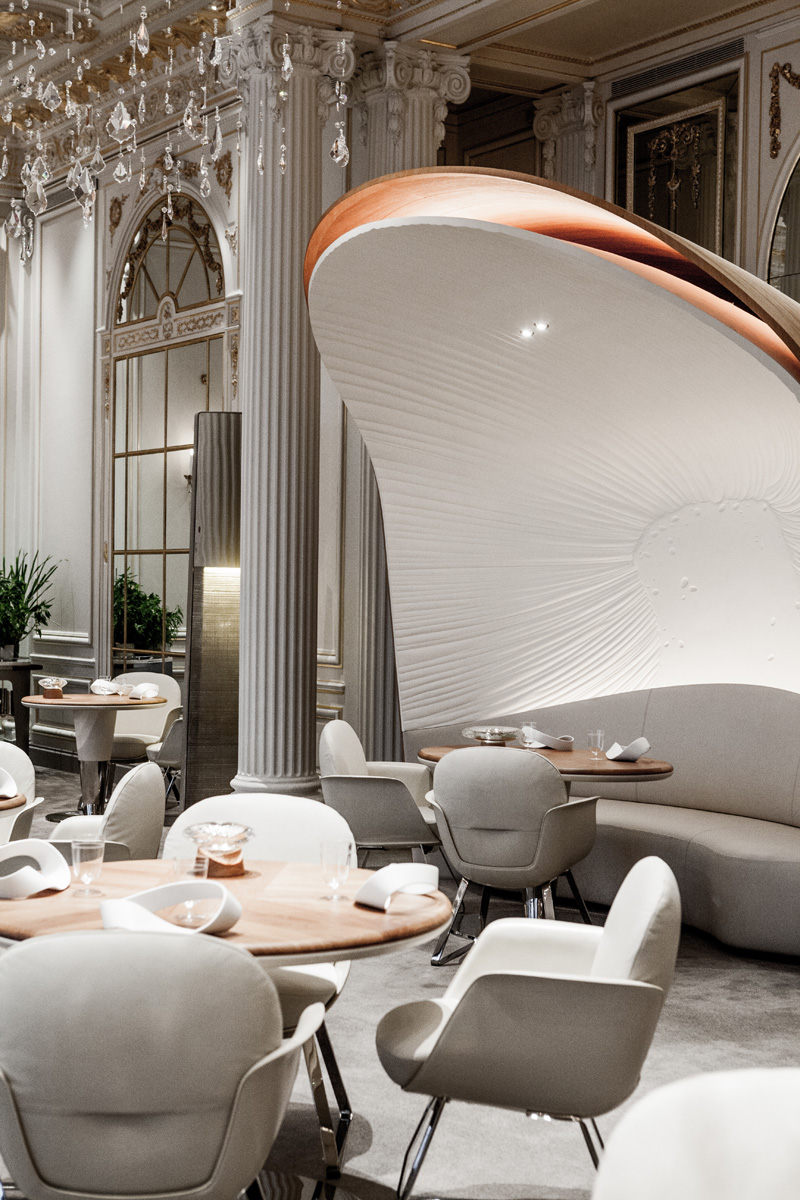 As you enter the restaurant, your attention is drawn to the monumental polished stainless-steel domes on the floor that reflect the thousands of floating crystals of the ceiling chandelier, the only retained element of the restaurant’s former design. These super-scaled and unusual domed shapes form the backrest of banquettes where diners can sit, or screen off groups of tables and chairs. These domes, a witty and elegant twist on the traditional domed plate cover are made by ‘Meilleur Ouvrier de France’ – Matinox and Atelier Pierre-Yves Le Floc’h. 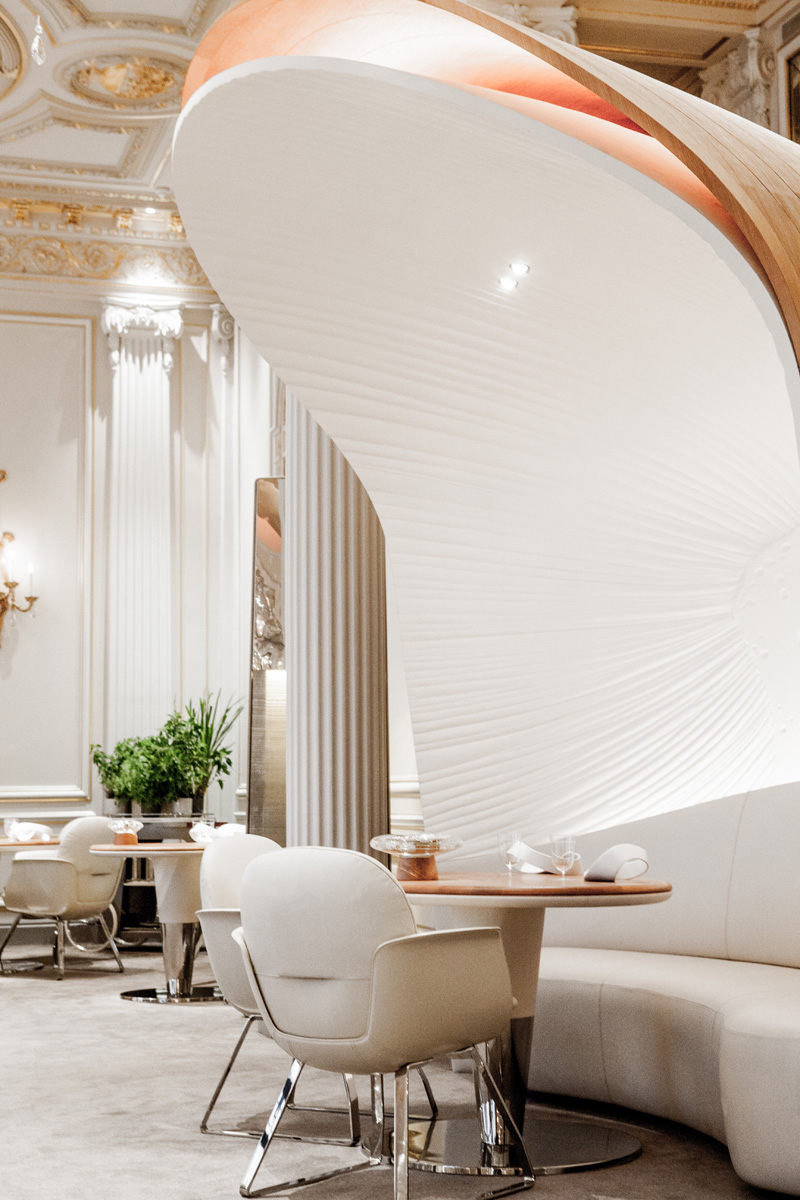 A striking timber alcove wraps itself around a single table where diners receive a dedicated service and benefit from greater privacy. The outside of the alcove is in unfinished timber, made of strips of curved oak joined together in a shape somewhat reminiscent of the hull of a fishing boat. This piece of ‘micro-architecture’ gives a simple material –wood– a theatrical presence within the overall decor. 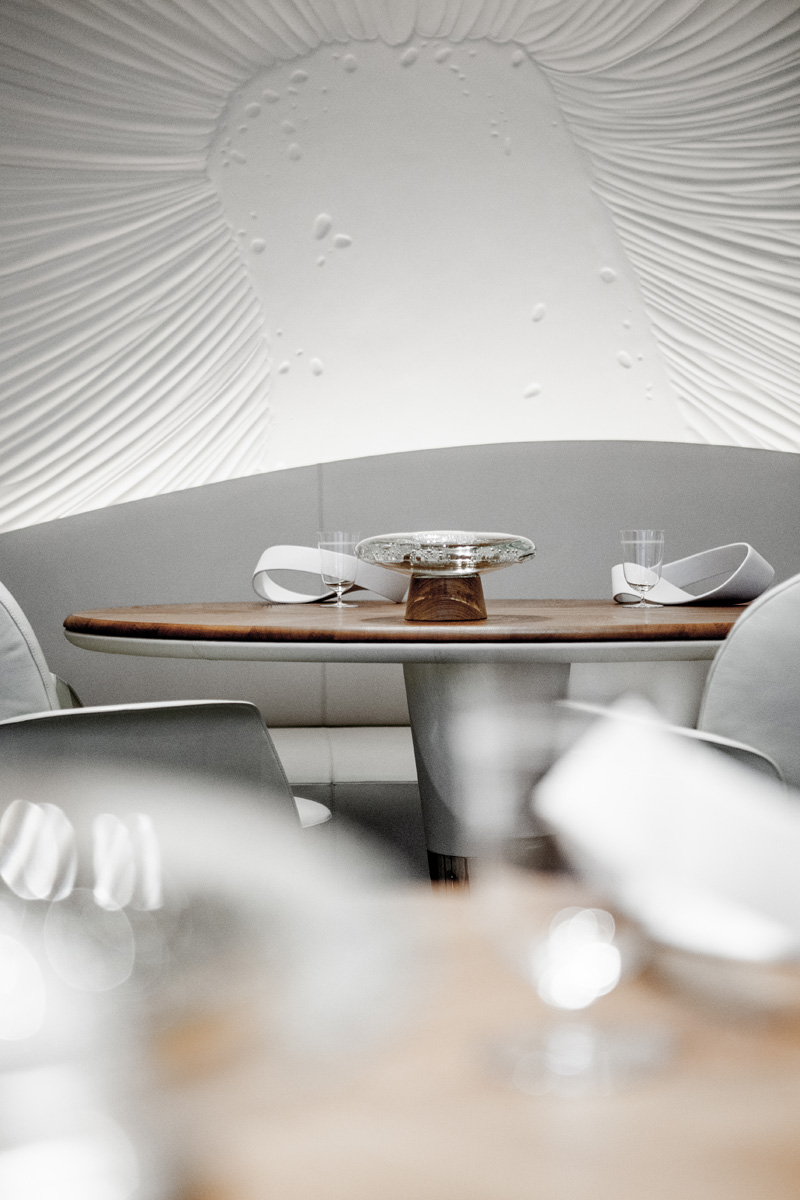 At the same time it highlights the overall character of the project, which places itself somewhere between refined simplicity and elegant authenticity. Nestled inside the wood shell is a leather banquette that fills the width of the alcove while the alcove’s inner surface of moulded plaster is finished with a surprising motif: the imprint of the restaurant’s old screens, that were decorated with embroidered details of vegetables. Like spirits of the past, their stylised trace remains. 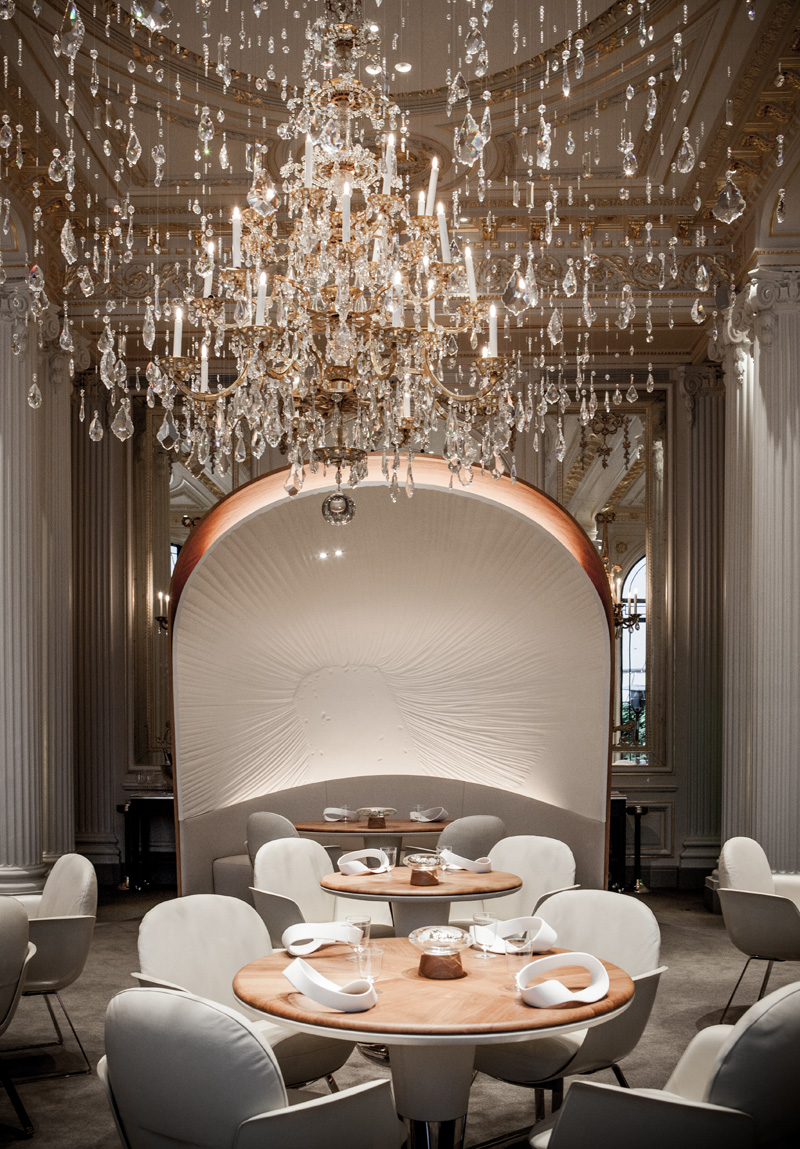 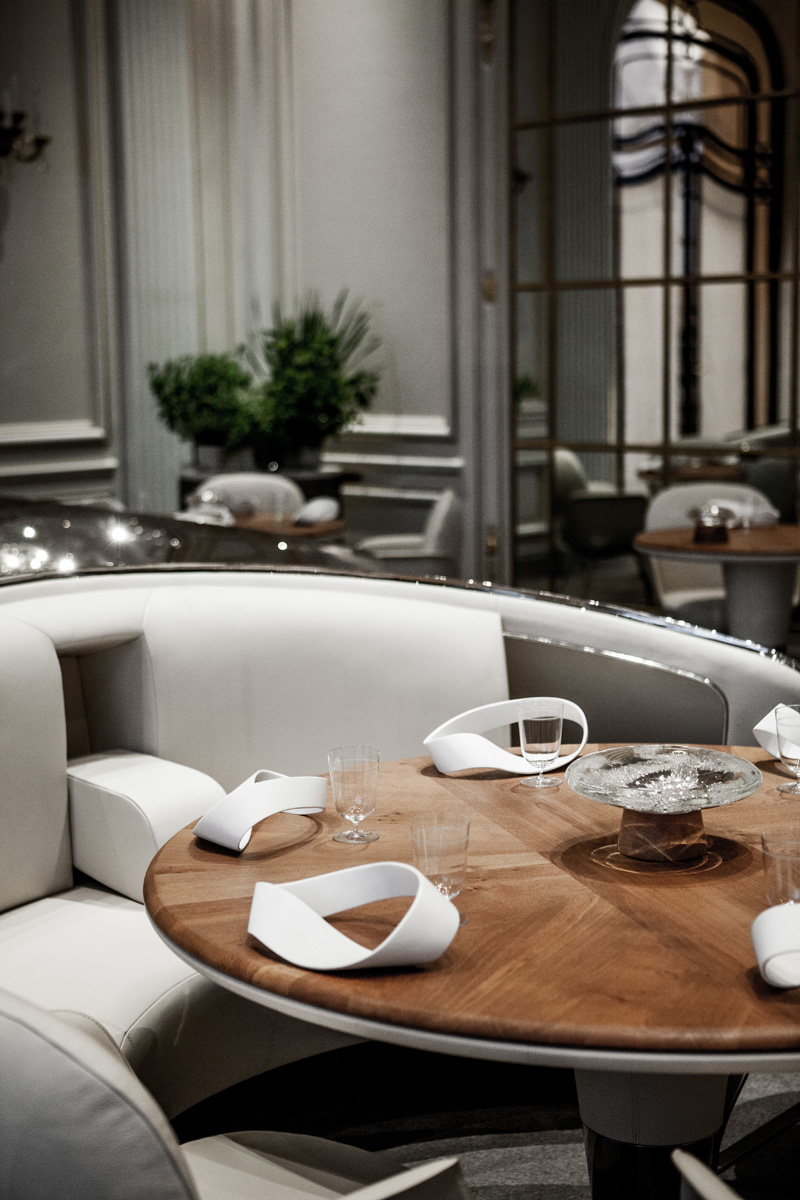