Project EGG is currently on display at Dutch Design Week 2014. 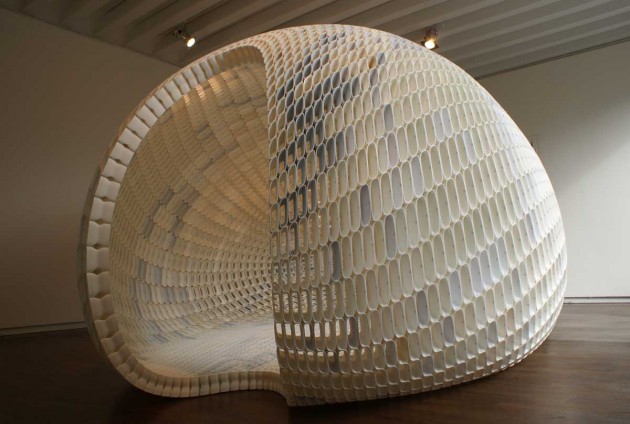 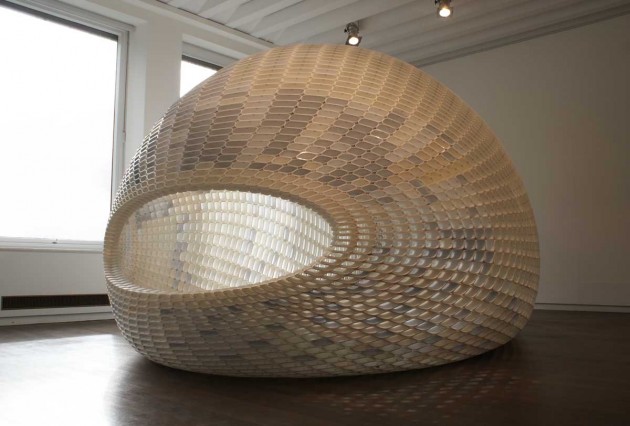 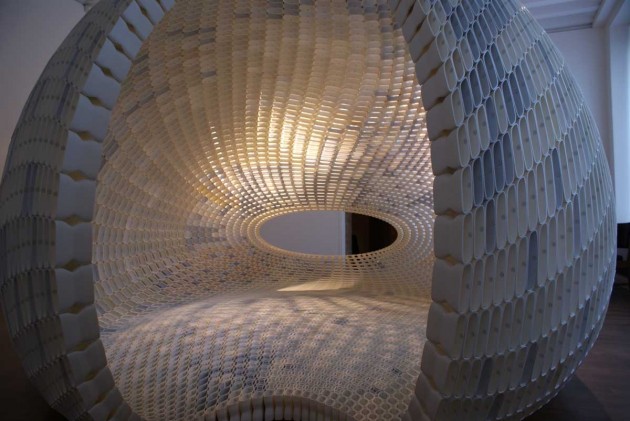 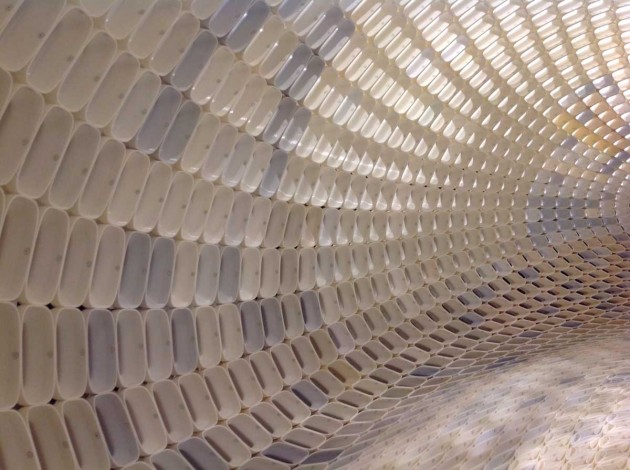 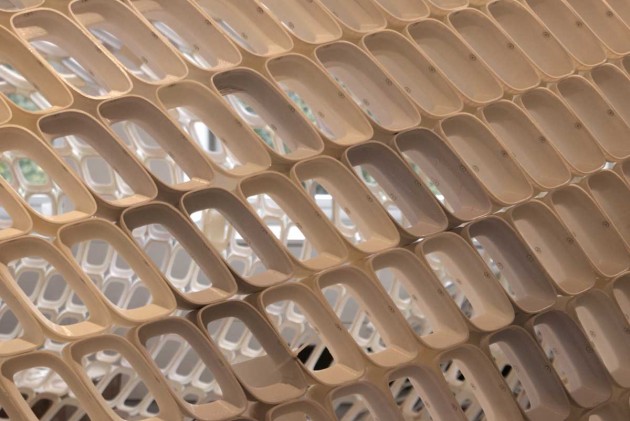 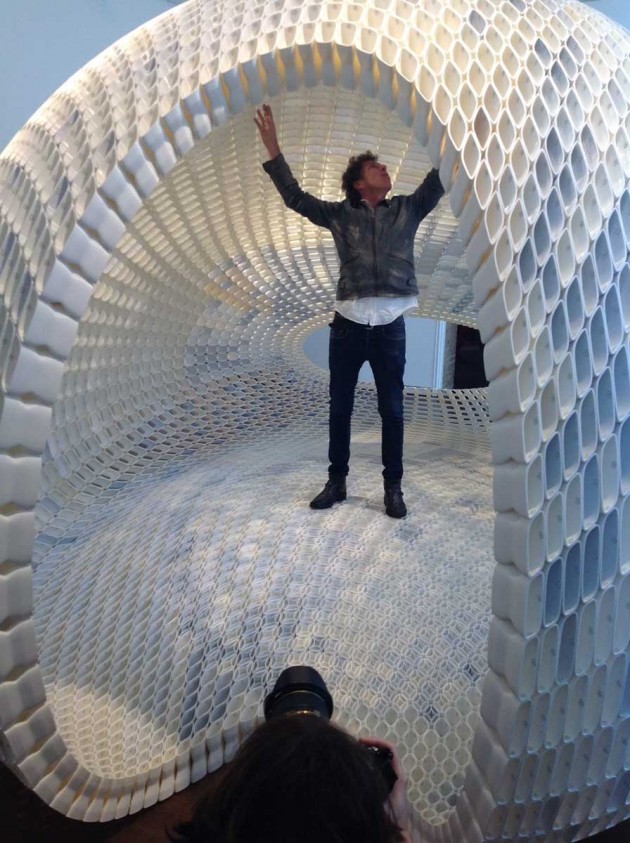 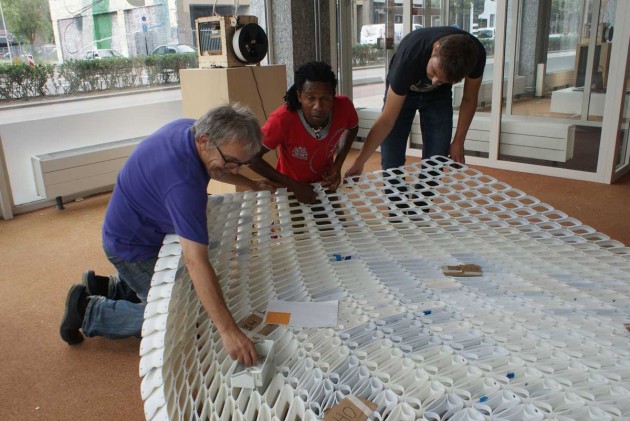 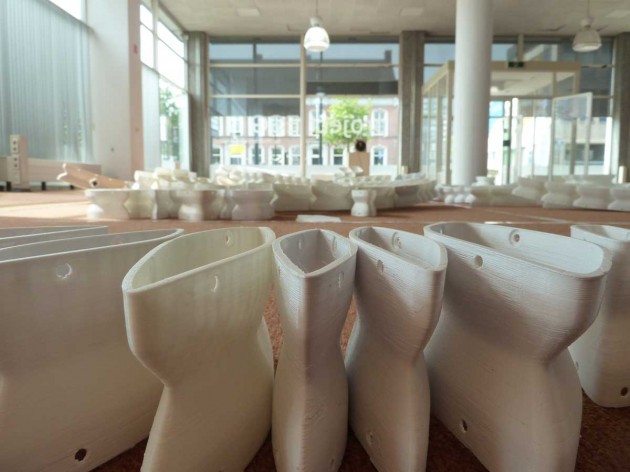 From the summer of 2012 I have been playing, muddling around and wondering with 3Dprinters and the fascinating possibilities of the new software we have under our hands. It made me want to do something new, really new.

In a number of ways I have tried to shift boundaries with project EGG.

If you are willing to have an eye for the fact that most large things often consists of a collection of small things you are suddenly not limited by the size of the printer itself.

If a 3D printer is a new machine, you could be challenged to look for a new kind of shape language. Varying each and every object might be one of the aspects, the coarse surface of the objects might be one too, and of course a shape that could not be produced in a simple mold.

Combining all the ideas I had with engineering, building, inventing, parametric 3D software and design turned the whole of the process into a lovely discovery.

An object like EGG would have never been made ‘the old way’. The building itself is constructed with 4760 stones that are all different. Not one is the same as the other. You can’t do that in a factory. We could also not have been given birth to EGG if it wasn’t for the community that collaborated in such a large way.

So, this is what we can do with 3D printing. Is this the answer? No. I am actually left with all kind of questions again.

Project EGG is just the beginning. It shows what you can do with a few machines, a community and an idea in your head.

Project EGG is an object measuring 5 x 4 x 3 meter, composed of 4760 uniquely shaped stones, 3D-printed by Studio Michiel van der Kley together with hundreds of co-creators all over the world. The largest 3D-printing community art project so far. A new way of creating and collaborating.

You could call Project EGG a poetic pavilion. The building has an organic form and structure where the floor, walls and ceiling fully and seamlessly merge.
It has been constructed with 4760 open, elegantly designed stones, each one’s shape unique. Many small elements together forming a large structure, as in the objects from nature that designer Michiel van der Kley likes to look at, such as crocodile skin, corn cobs, coral. He finds in these a language of segmentation which he merges with the possibilities of desktop 3D-printing; when you see a large object as the total of many small elements the potential is limitless.

The material is new, PLA, re-usable and biodegradable. Also the way this object is produced is new; not by a factory but by a community.

Project EGG invites you to enter it and to be inundated by the play of light and shade, to see 100 shades of white and to experience space and emptiness at the same time.
This is the largest desktop 3d-printed co-creation art project so far. During his research on the potential of the 3D-printer, Van der Kley came into contact with bloggers and digital communities all over the world. He learned much from them and invited them to print one of the stones for Project EGG. Since each stone has to be printed individually, it is very easy to make slight variations in each design. Participants received the digital version for their unique stone in which their name has been included. Additionally, it was possible to adopt a stone for a small amount of money for people who don’t own a 3D-printer, but would like to support the project. Hundreds of contributions by co-creators and adopters have been received, from the US to Australia, from Portugal to Croatia.

During the next two years, Studio Michiel van der Kley wants to show Project EGG all over the world. A tour is in the planning. Meanwhile research is ongoing, such as the into finding the best material in which to execute Project EGG for an outdoor setting.