Ron Shenkin Designs A Concrete Shelter For A Cemetery 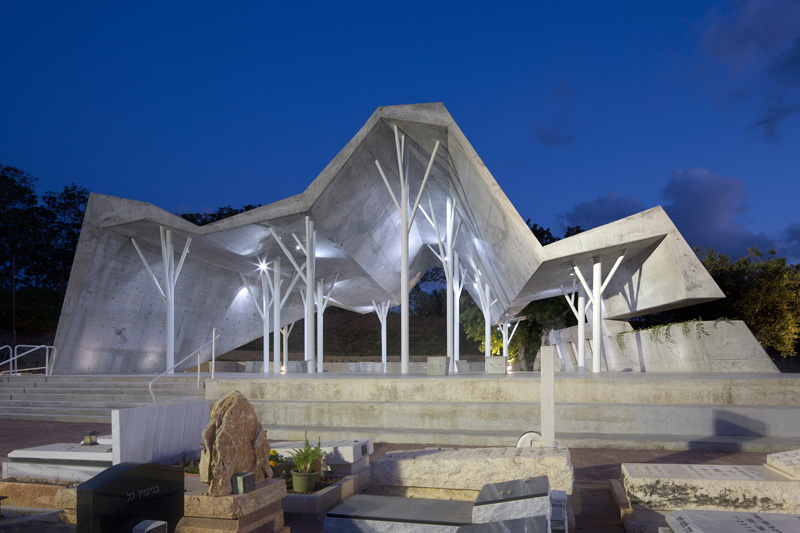 Ron Shenkin studio for architecture & design have completed the Open-Sided Gathering Shelter, a structure that functions as a space for mourning at a cemetery in Pardesia, Israel. 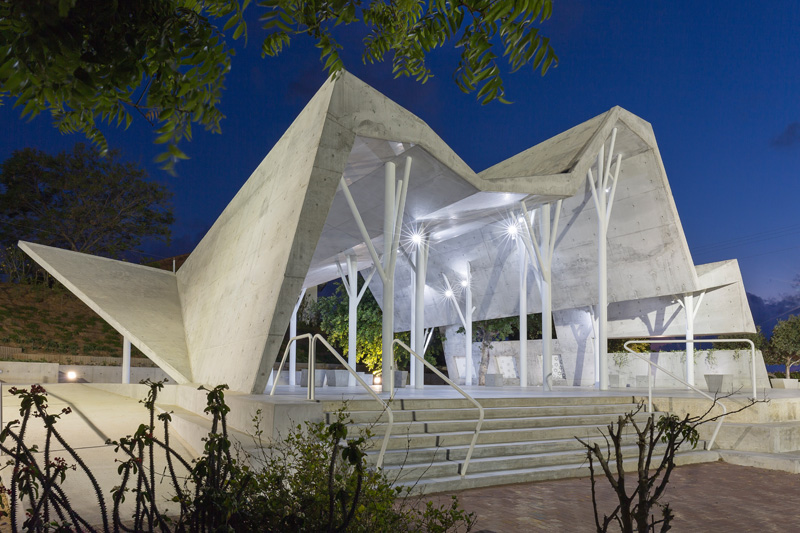 The structure functions as a place of convergence of mourners and for the reading of eulogies prior to and during the burial. It’s essential nature is that of a pavilion or open sided shelter and is located next to the cemetery. The building is comprised of two entrances, the smaller of the two serves the family of the deceased. 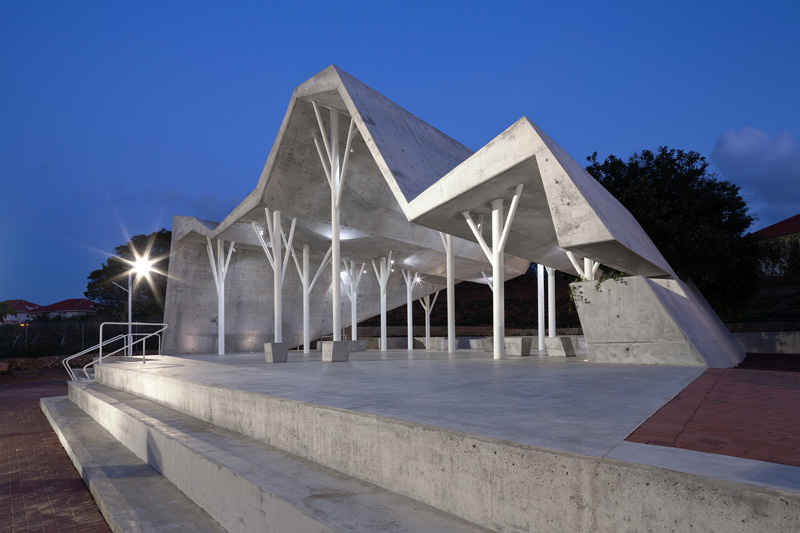 The second and larger entrance serves the rest of the mourners, this entry allows easy access to the spacious building. One side of the front of the building remains open to the north. 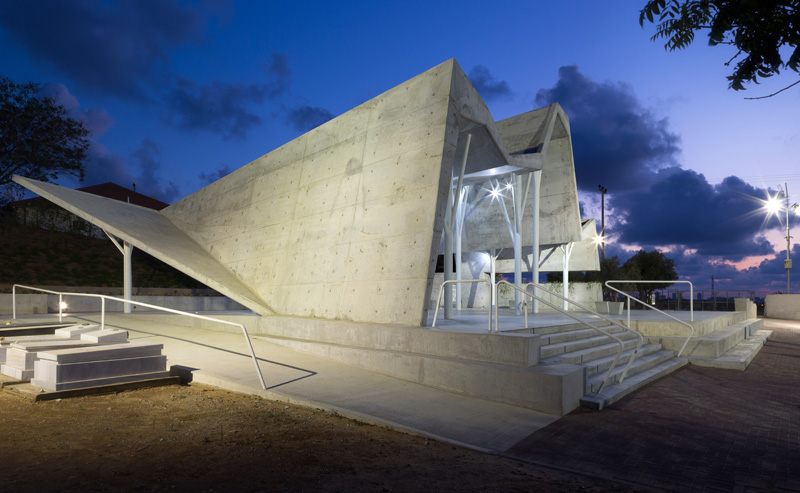 The positioning of the structure also allows, those mourners who prefer to remain at a distance, a sense of closeness to the proceedings and a shaded area that is not inside the structure itself. 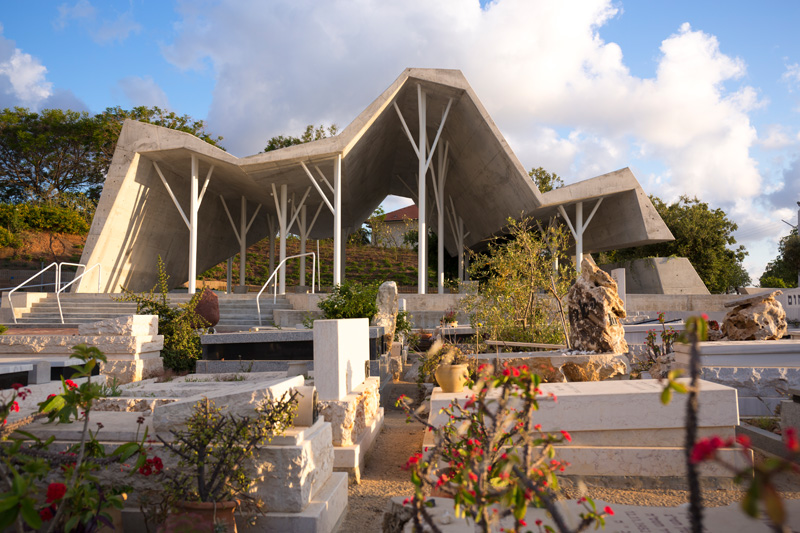 There are two exits leading to the burial lots, one of which is easily accessible and the other is via a flight of stairs. 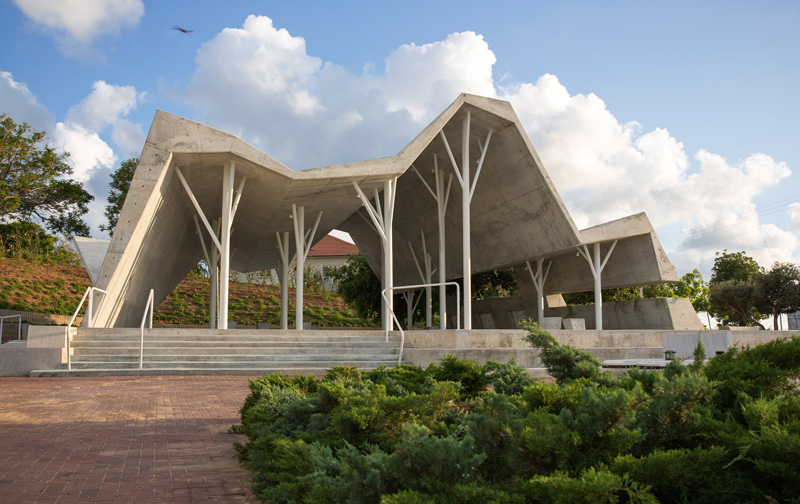 The structure has one solid stone wall to the west which serves to block any direct afternoon sunlight except what is allowed through via a long narrow window. 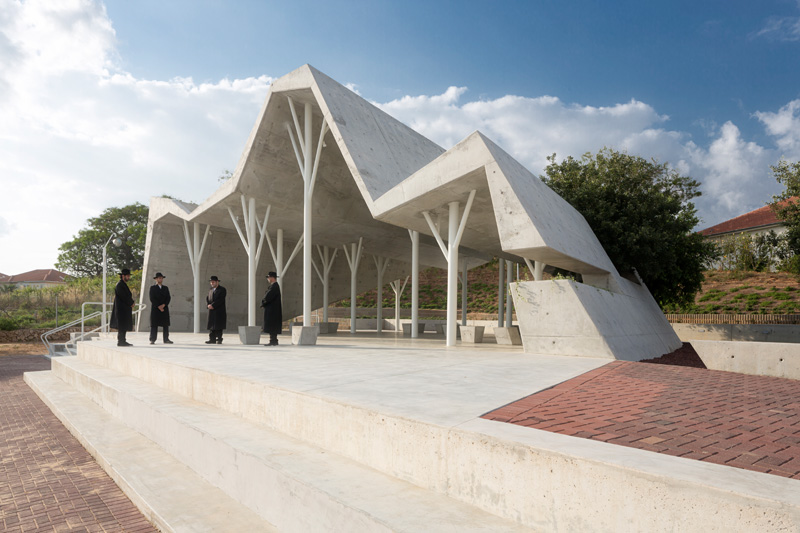 The area in which the structure is situated was surrounded by orchards which were originally raised to make space for new residential and commercial building projects.

During the design process we decided to take the surroundings into consideration. By erecting a monument to the rural surroundings that were demolished for urban repurposing. 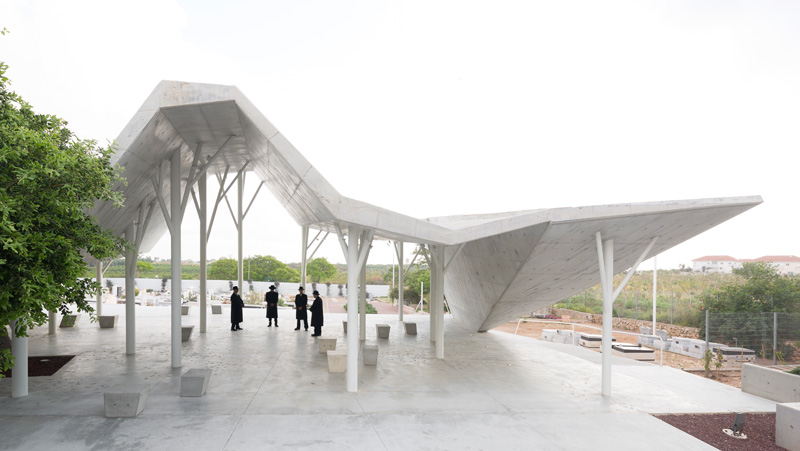 The monument consists of an exposed concrete slab symbolizing the expansion of construction. The slab is stabilized by tree-shaped metal pillars denoting the trees that were cut down. 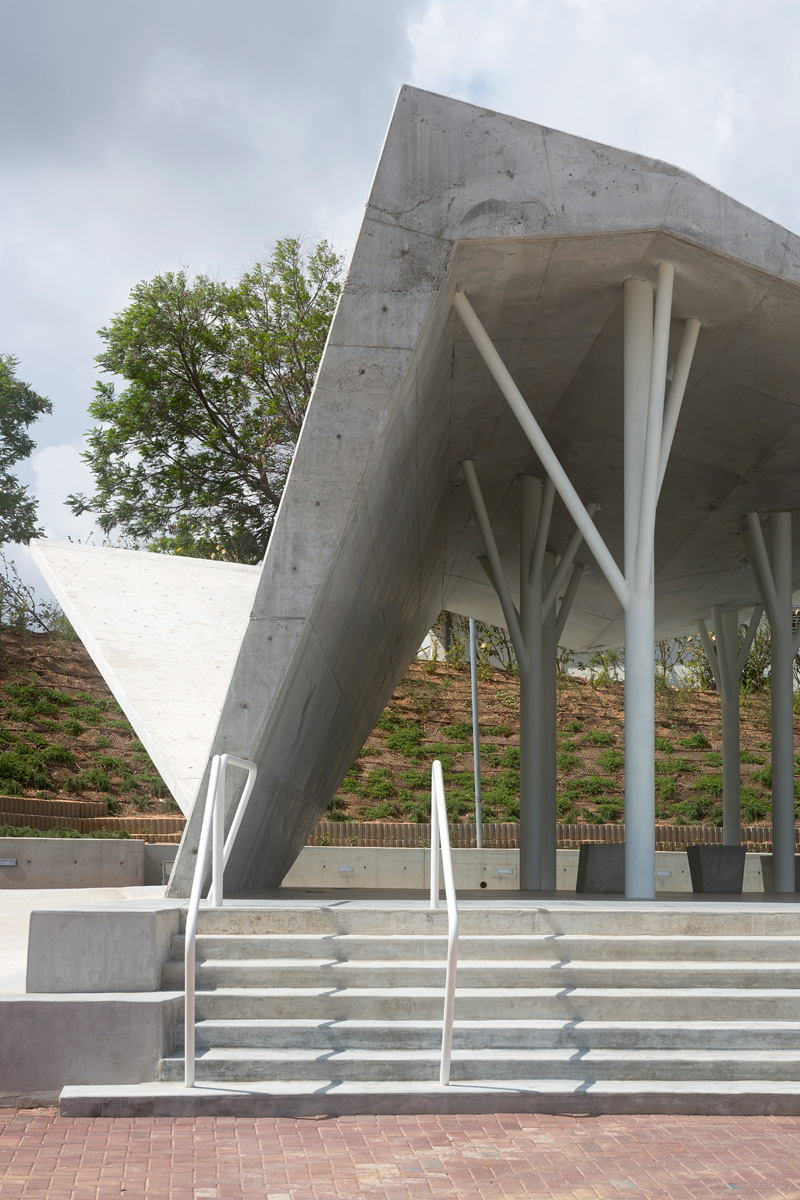 One oak tree remains within the structure. The ceiling above the tree was left open to allow for the presence of the tree to create a dialogue between the living tree and the metal symbols. 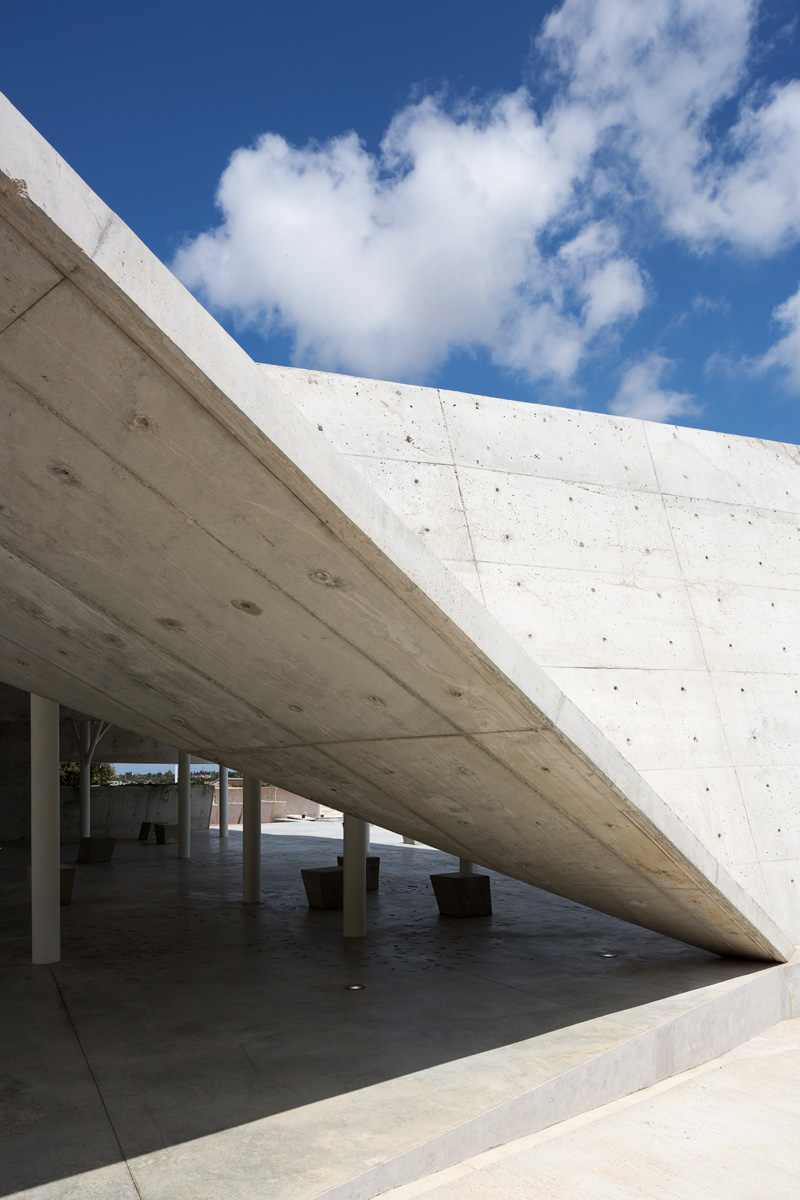 On the northern side of the building there is a line of concrete, beginning in the ground on the west side and climbing up through the window. 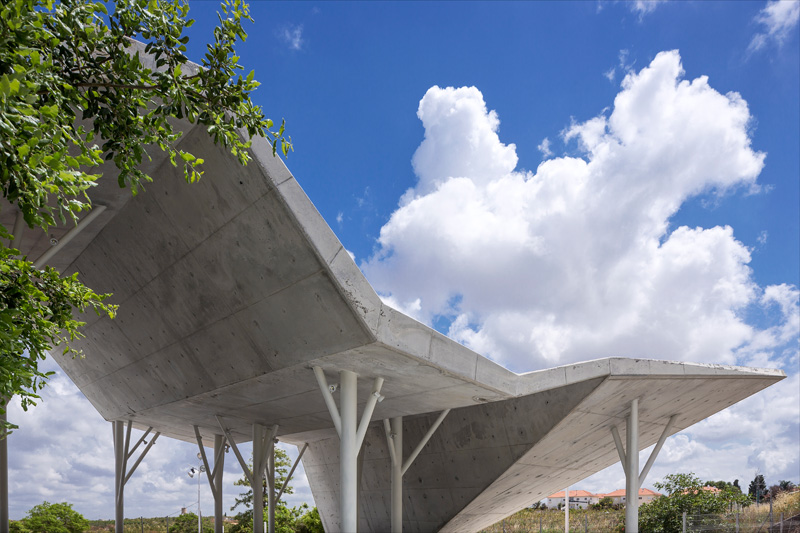 Ascending to the roof, ceilings and walls and making its final decent back to the ground – like a man who comes from dust and to dust returns. 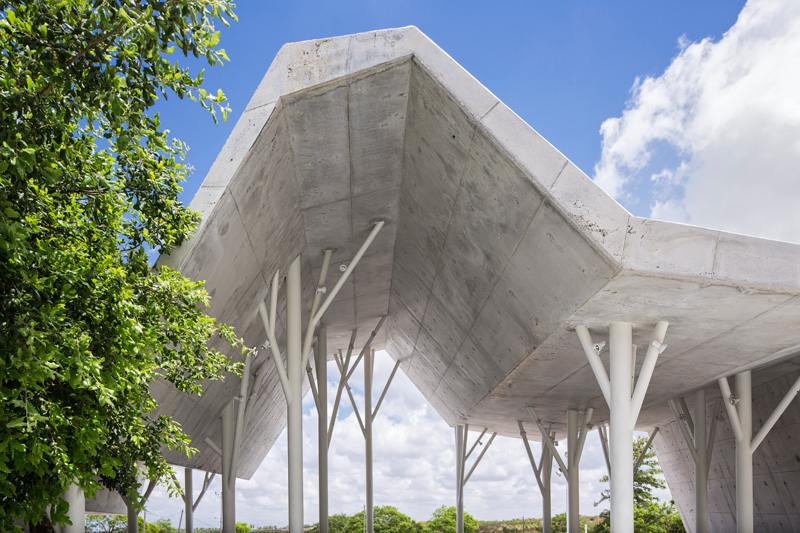 The building materials and color pallet are Monochromatic consisting mostly of shades of grays and providing a sense of cleanliness, neutrality and sadness. During the evening the building is lit from the inside and out. 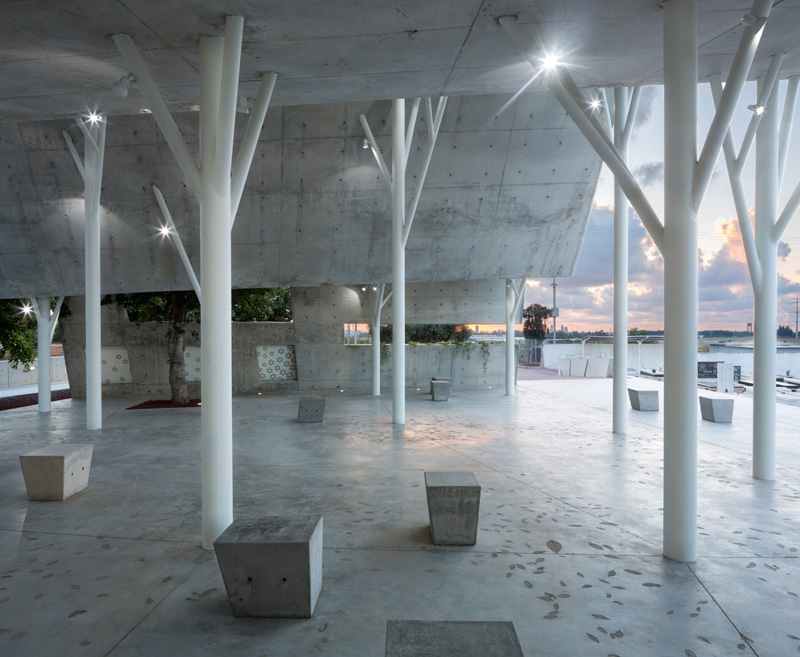