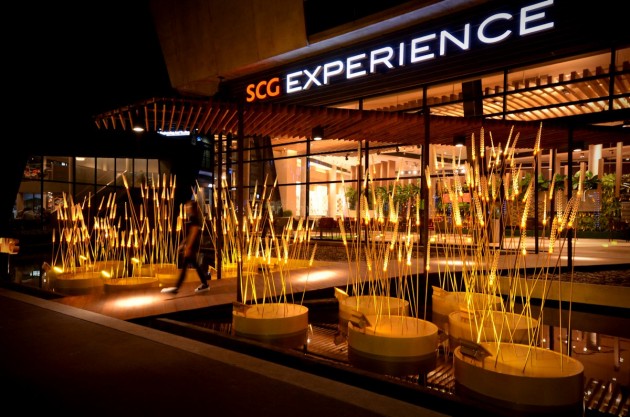 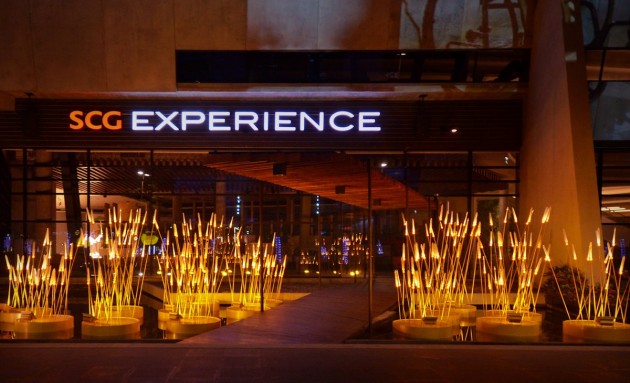 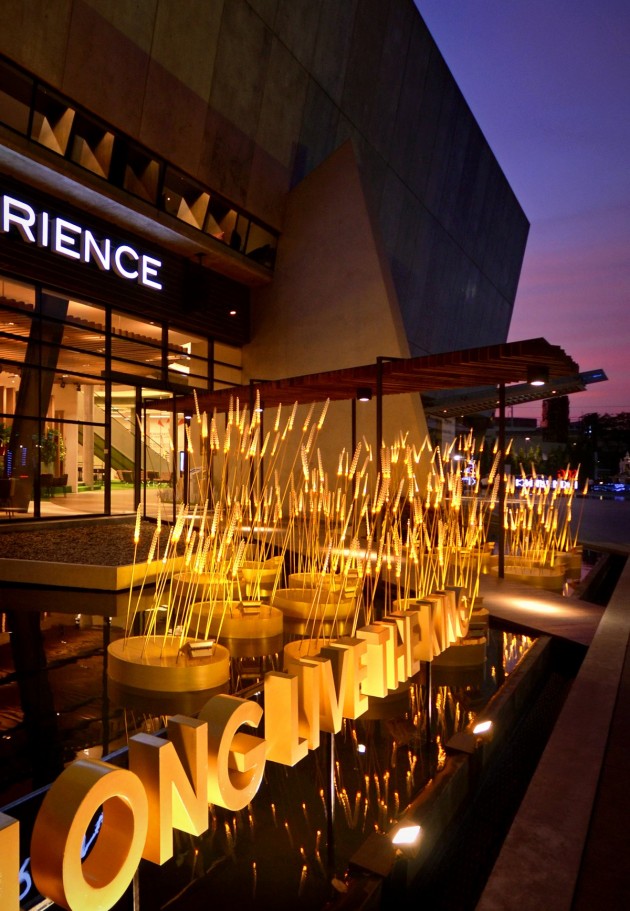 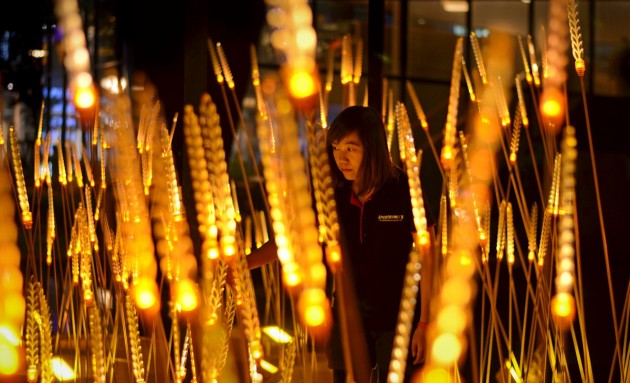 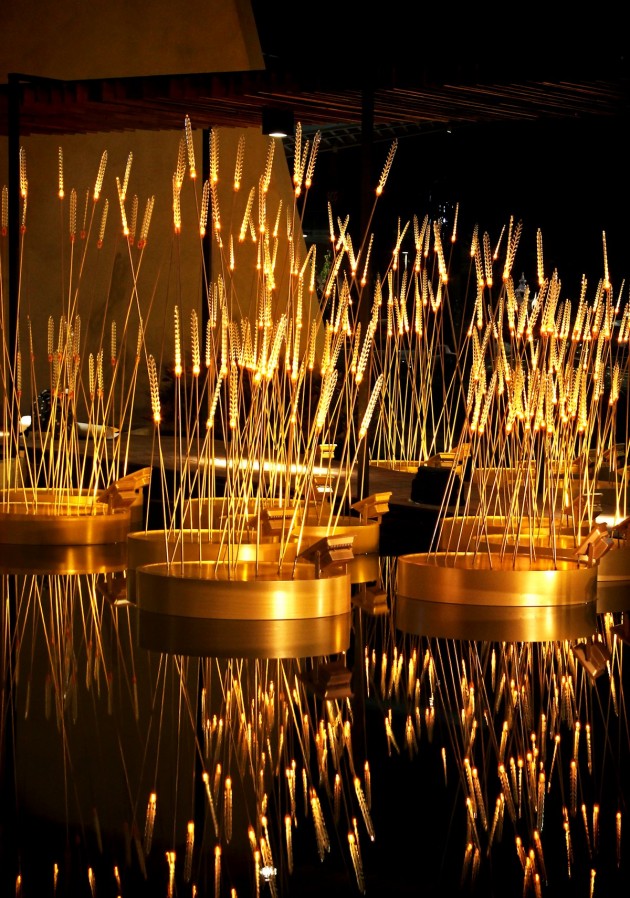 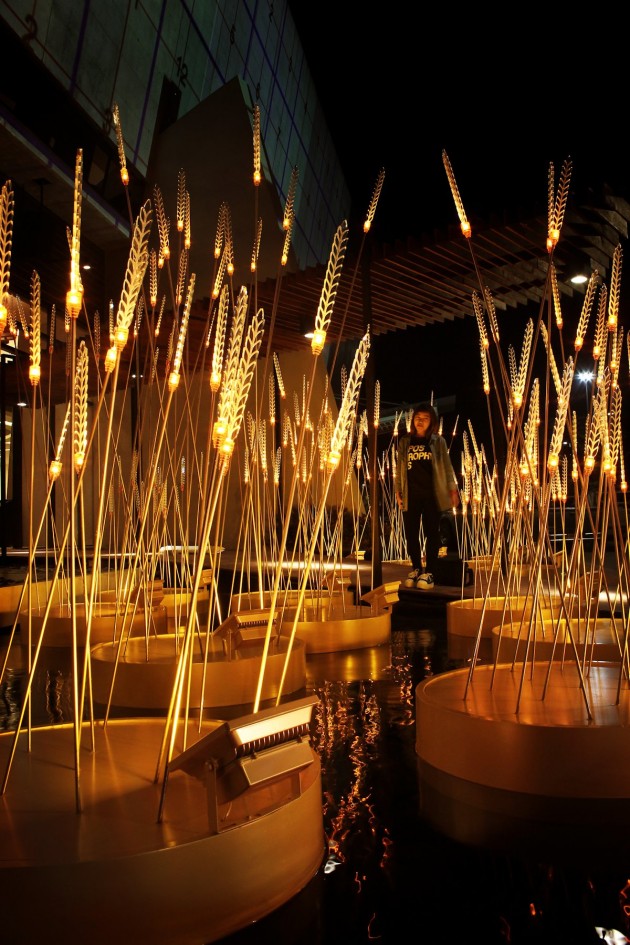 The lighting installation ‘Royal rice field’ is a new approaching to the main entrance of ‘SCG experience’ building as well as to exhibit and honor the intelligence of His Majesty the King Bhumibol particularly in Agriculture due to the best occasion to cerebrated His Majesty the King’s birthday in 5 December. It is represented by a grove of ‘light spike’ among the water mean the abundant of Thailand and also ‘gold’ is represented the brightness of His Majesty thought in agricultural which is the fundamental of Thai economics.

‘Agricultural products export’ is the main revenue of Thailand as also has been recognized in general as the best of quality, especially ‘Rice’ which could be the root of Thai culture. According to above mentioned, His Majesty the King Bhumibol has pointed out how important of ‘Agriculture’ in Thailand. Thus, His Majesty has initiated to recover a “Royal Ploughing Ceremony” for an encouragement to every farmer when the beginning of growing season. Moreover, there are several Royal Development Projects which has been spread out to every region of Thailand. Or even, ‘Royal Chitralada Agricultural Projects’ is consisted of the demonstrated rice field, Rice mill, fishery pond, milk farm and others. These projects have been implementing a diverse range of agricultural activities for experimentation and demonstration purposes emphasized on His Majesty the King’s initiatives called “Sufficiency Economy” that encourage the villagers to become self-sufficient and improve their long-term quality of life. For all of above reason, ‘rice’ has been used as a main inspiration to design and symbolic to interpreted for this project ‘Royal rice field’

‘Royal rice field’ has been experimented for the best aesthetic form, suitable light bulb specification, material and also its composition. Finally, it is composed of 300 golden-yellow LED light bulbs, enclosed with rice spike shaped transparent acrylic sheet on the top of its golden stem which is made from steel tube inserted with LED wire inside. To imitate the characteristic of nature, each figure has been adjusted its height and composition randomly into 15 circular platform islands with an underwater electrical wiring system enhance with waterproof lighting to flood all the field and CNC plywood text ‘Long live the king’ with static golden light. Thus, their metallic gold is brilliant and stunning in the sunshine but dramatic glow at night as well as the reflection from the pool is created the glare dazzling onto the water surface for all time.

Essentially, the design team devote ‘Royal rice field’ to celebrated His Majesty the King’s birthday and also hope this static lighting installation can be calm down your sentimental, awaken your consciousness and light you to find out any solution even personally or Thailand political crisis.