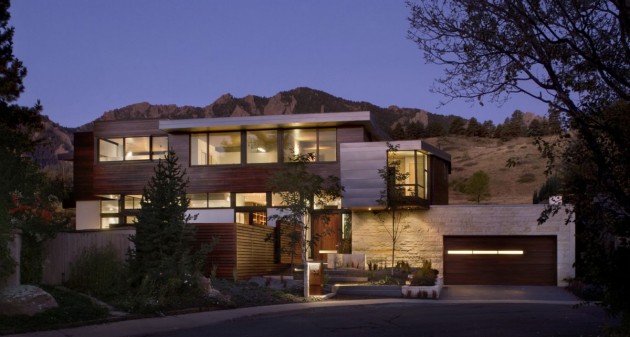 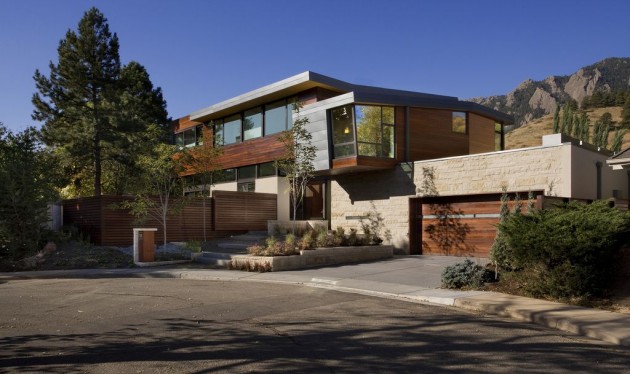 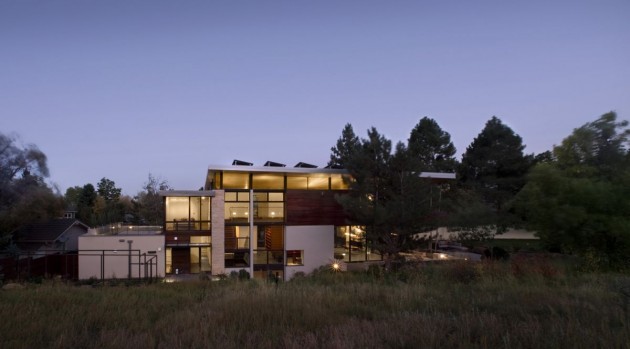 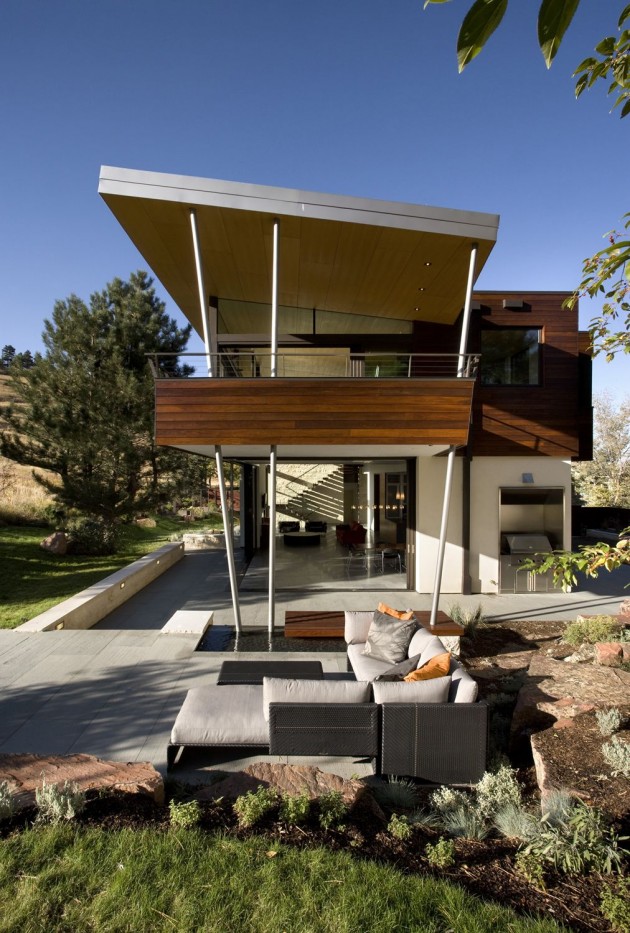 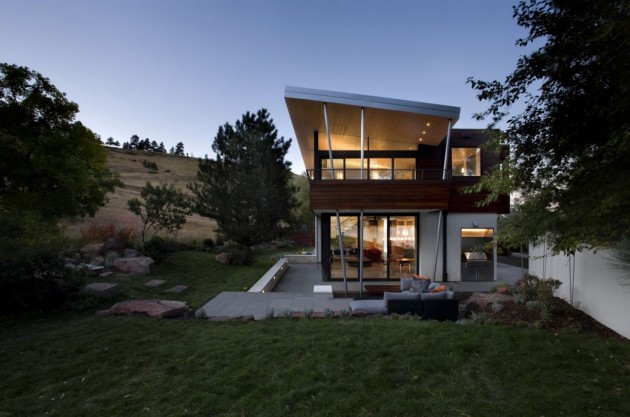 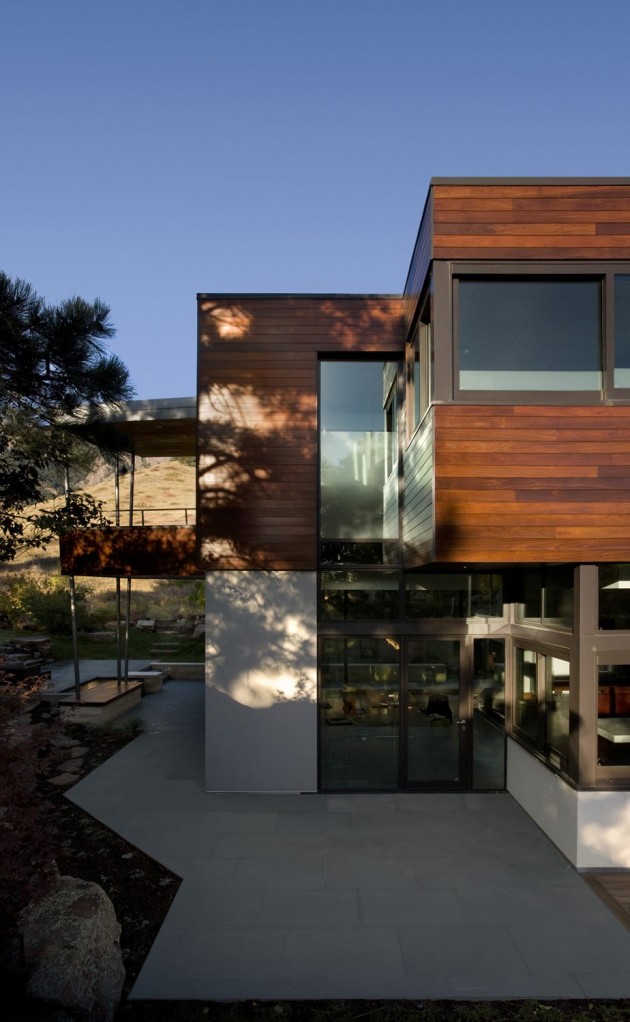 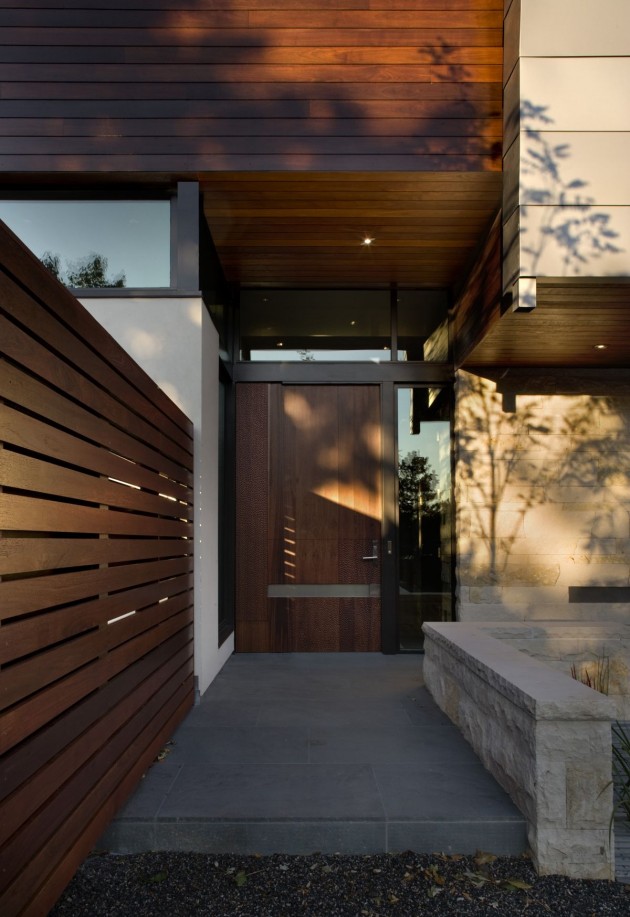 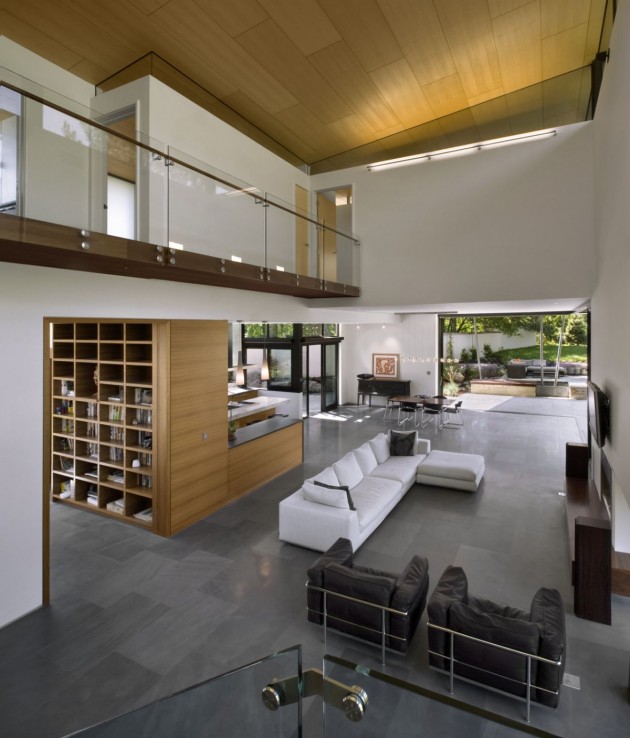 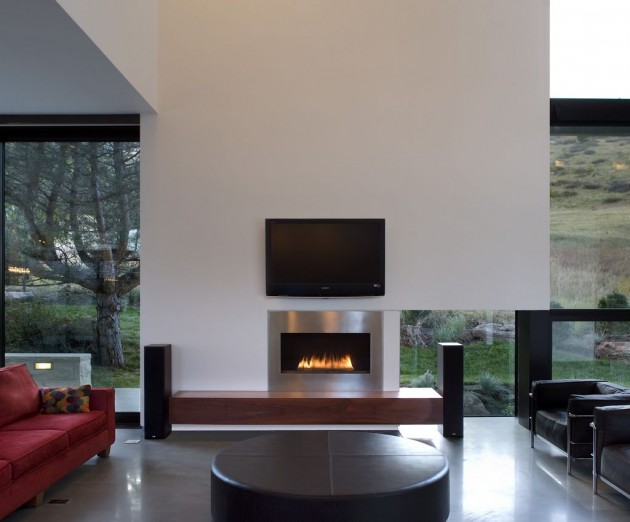 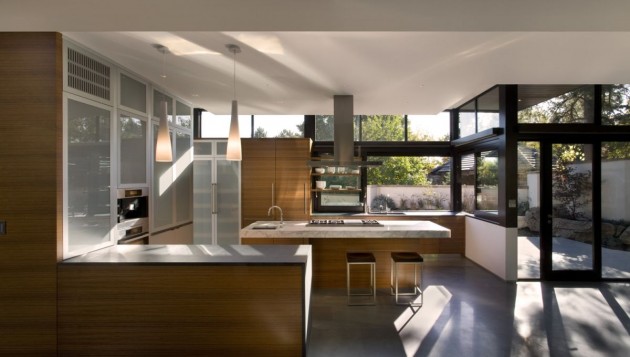 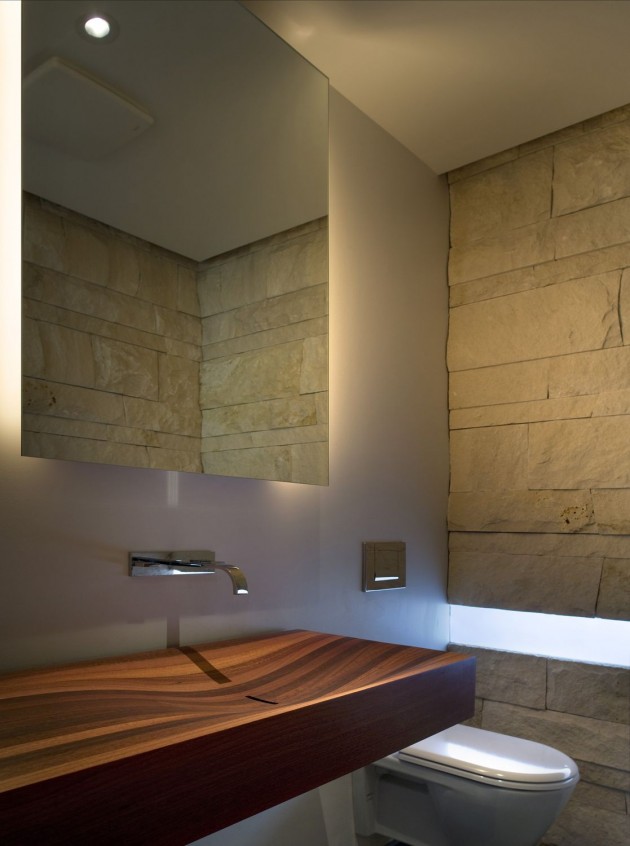 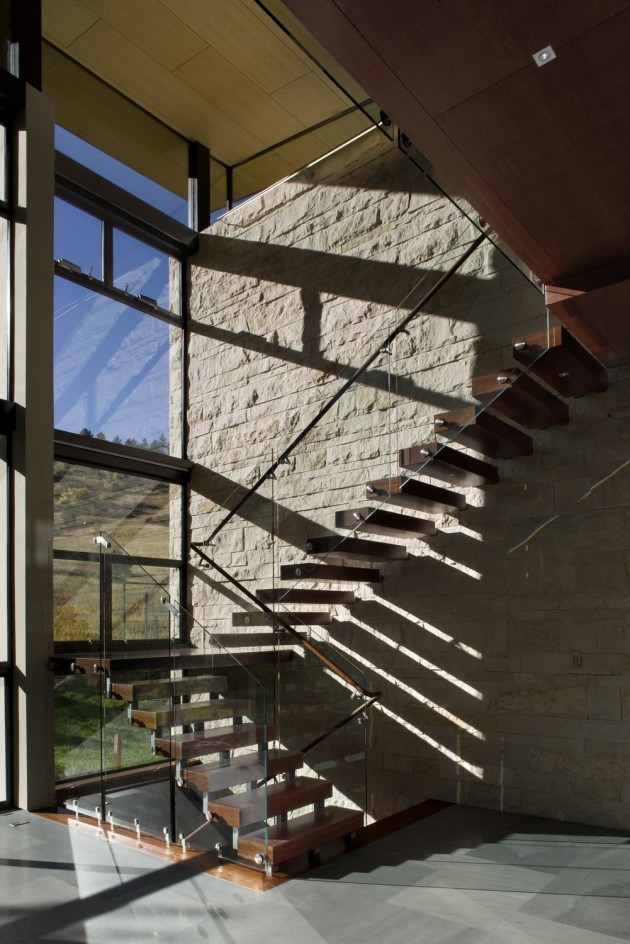 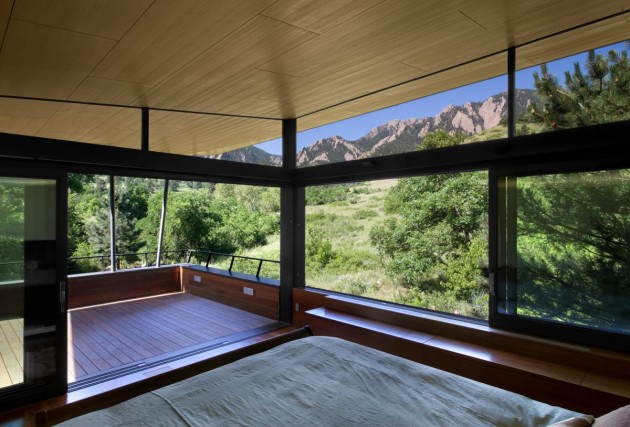 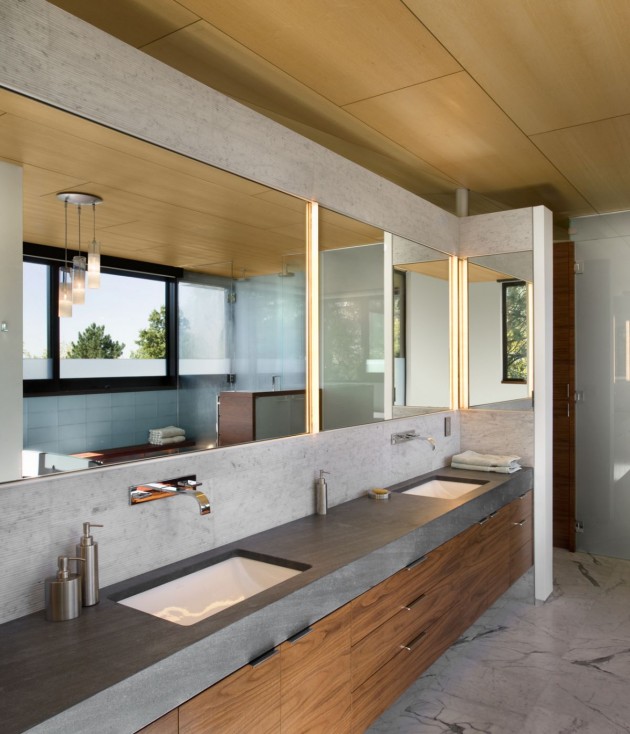 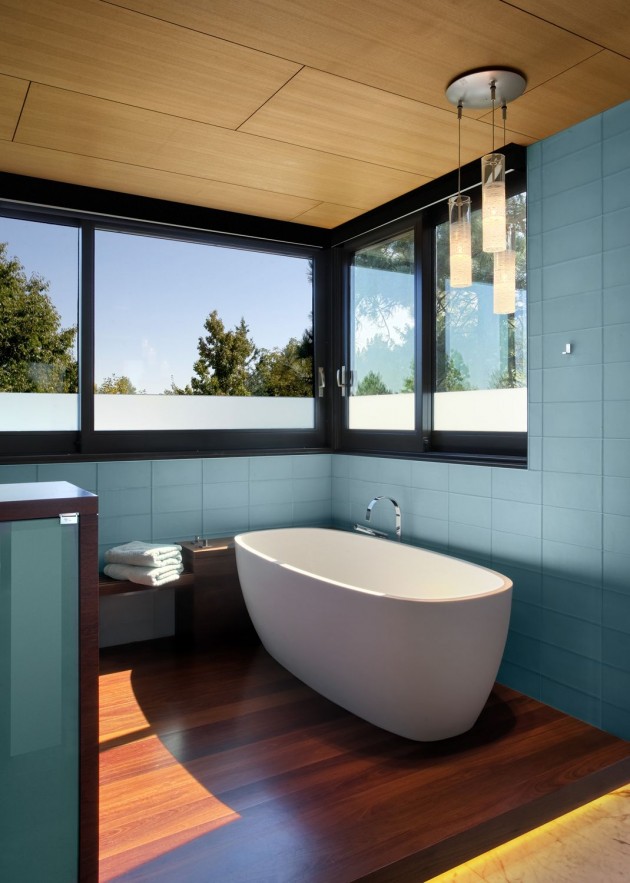 A Pre-Paleozoic fold creates a distinction between the Great Plains and the Rocky Mountain Foothills. Geologically referred to as a syncline, a crease caused by uplift of an ancient sea bed, the fold distinguishes the inhabited plains from mountain park space. The upward plane of the fold presents a landscape described and observed moving sectionally through the house.

The wedge shaped site was bound by numerous restrictive land use limitations: a wetland buffer, height restrictions, a solar access restriction, and multiple setback and easement boundary requirements. A three-dimensional computer model was developed describing the limits of the buildable envelope.

The project was conceived as a threshold between the city and the mountain park. The client, an entrepreneurial and professional rock climbing couple, requested the house to be “a place where town life can be left behind.” The house is a threshold between both the cultural and geologic creases: one between the domestic and the feral, the other between horizontal and vertical. Through a domestic grove of flowering trees, a solid wood wall, broken only by a perpendicular stone wall, opens to the house interior. Once inside, the stone wall becomes a thickened poche of mechanical and service elements leading through to the west wall of the house, a glazed wall framing the mountain parks.

The western wall phenomenally erodes, revealing the landscape with varying degrees of openness. At the entry, framed apertures provide controlled vignettes of the landscape from foreground meadow to high ground cliffs. As the entry opens to the living spaces the apertures transform in scale to reveal the expansive landscape in its entirety. At the southwest corner thirty feet of glass retracts into the walls, dissolving the boundary between the domestic and the wild; the living spaces are then bounded only by the uplifted cliffs beyond. Reciprocally, the native meadow to the west folds onto the garage roof providing easy outdoor access for visiting guests in the house’s guest suite.

A simple stair cantilevers from the stone wall. Climbing the stairs, the foreground, mid range, and ridge views are sequentially revealed. Experientially scissoring into the landscape and back into the house the stairs connect the mountain park with the house. The west wall of glazing extends the western room boundaries to the wall of rock and meadows beyond. The east wall remains closed, allowing only privileged, controlled views and light from the clerestory above.

Working within some of the strictest energy performance codes in the country, the house is designed to be self sustained utilizing a ground loop heat exchange system that taps into the very bedrock seen at the distant ridge. A ten kilovolt photo-voltaic electrical system powers pumps, compressors and the domestic electrical needs.

To support an envelope comprised of 50% glazing, a structural steel frame is used in place of traditional stick framing throughout the home. The western facade was challenged by height and wind exposure. The thickened wall is a steel brace frame that incorporates vertical vierendeel trusses to resist the 120 mile per hour winds coming down out of the mountains. Additionally, it accommodates the primary vertical mechanical chases.