The Google Office In Budapest By Graphasel Design Studio

Graphasel Design Studio have completed the Google Offices in Budapest, that were inspired by a spa atmosphere as there are more than 500 springs in the Hungarian capital city. 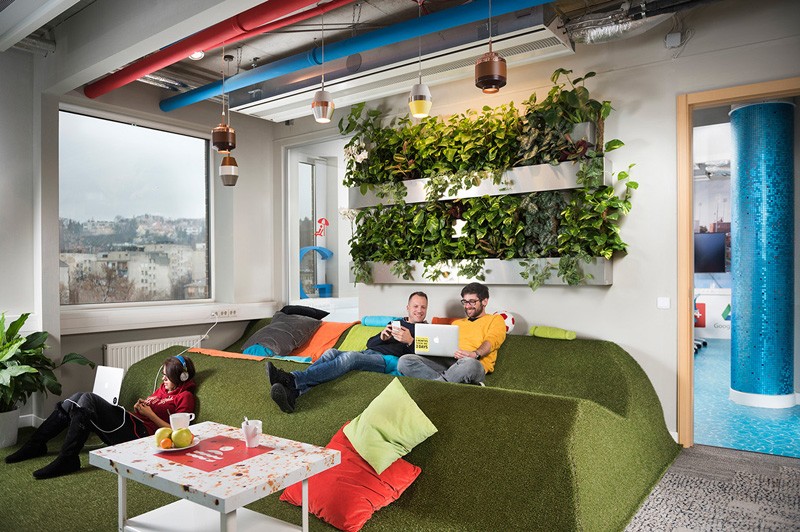 The offices of Google have a worldwide reputation of their joyful and scenery-like appearance. The main concept of the interior design is essentially the same in every country; a visual representation of a typical keyword. In some cases abstract concepts, rather than a specific topic, are represented, such as multi-cultural diversity or just simply an oasis. Apart from a spectacular interior design functionality is also of key importance, for a people-oriented, efficient working atmosphere should be provided to the employees 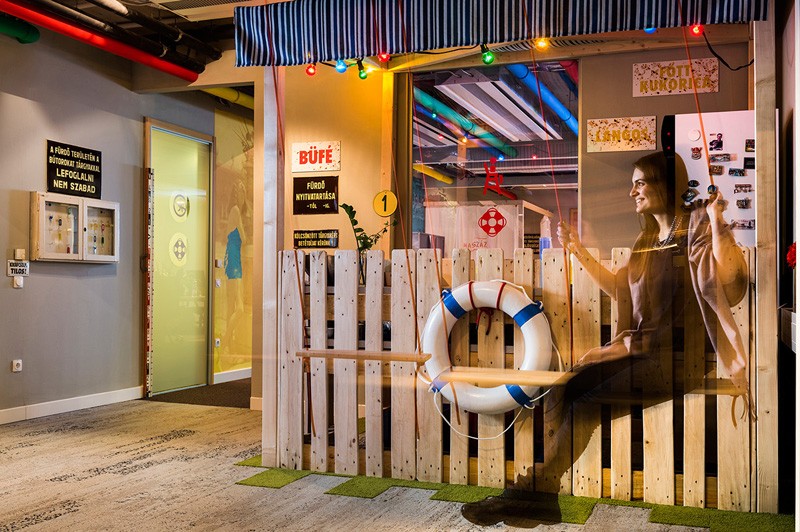 The concept – The keyword ‘SPA’ has been chosen for the office in Budapest, since more than 500 springs are present in the Hungarian capital city, which justifies its reputation as a spa town. Nowadays, many traditional and modern baths are available throughout Budapest, of which the two most important ones, the Széchenyi and Gellért baths are represented in the interior design of the office. 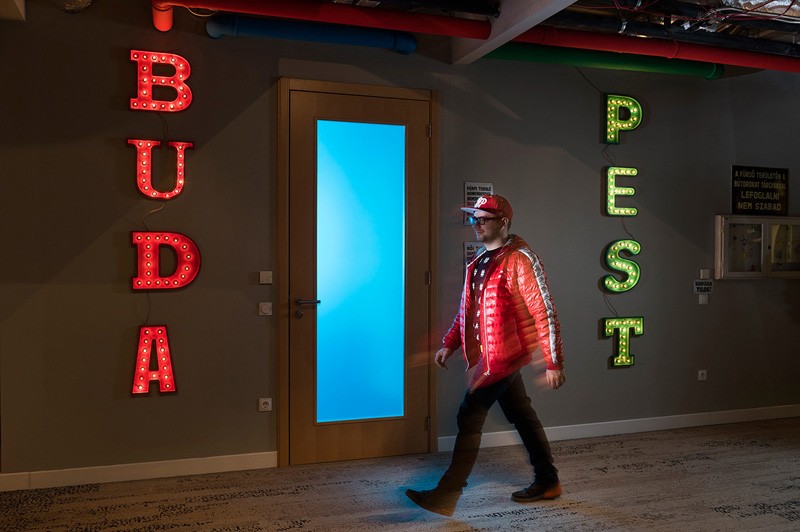 We could not disregard the importance of Hungarian water polo during the elaboration of the concept, as we as a Nation are pride of the nine Olympic gold medals and three gold medals in water polo world championships, and of course many other great achievements. Accordingly, water polo has become part of the Hungarian bath culture over the years. We aimed to demonstrate parallelism between sports and the spirit of competition in the world of business. As the spas are home to both sports swimming pools and outdoor rest areas, it was obvious that each room within the office was devoted to a different topic. Because of the extreme diversity of baths, a sauna and a steam bath, as well as a water polo arena and an outdoor beach are also included in the concept. 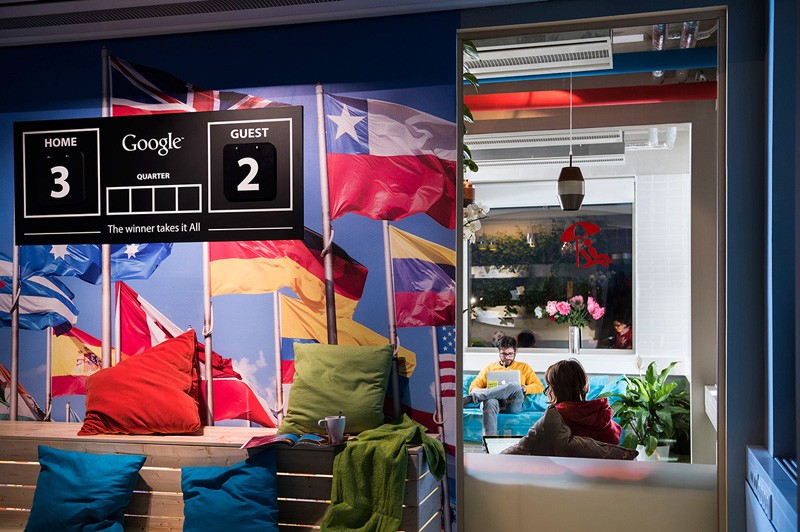 Implementation – The requirements set by Google were not only related to the visual appearance, but also insisted on using cheaper recycled materials; so we incorporated pallets and other residual materials from constructions. We also tried to ‘smuggle’ the works of contemporary Hungarian designers into the small details, combined with antique furniture and tables characteristic of old baths. 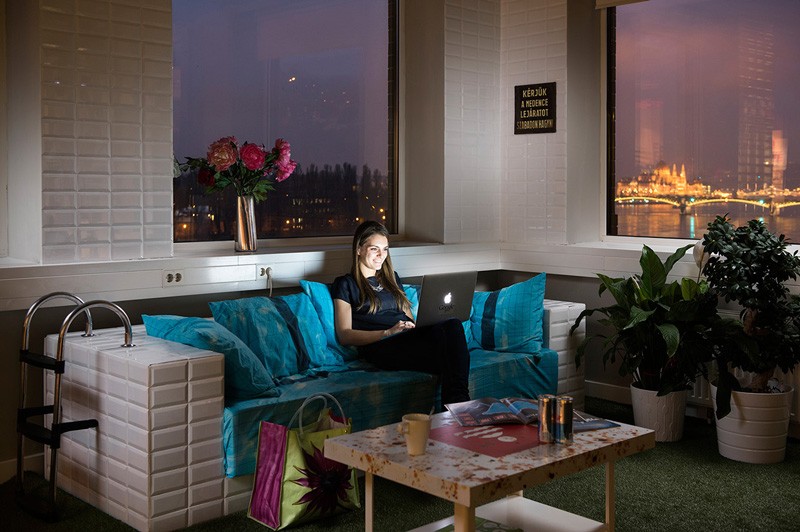 The original recessed ceiling fluorescent lights used to overlight the premises, and the whole atmosphere was cool because of the cluster components. By eliminating the suspend ceiling the conduits and cables became visible, which was then supplemented by further conduits painted to the colour of the Google logo. Thus the perception of height increased, and the many colourful ceiling pipes created a slightly industrial atmosphere. Whilst the more interesting regions are emphasised using spotlights, we aimed to achieve an overall cozy gloom in the area. 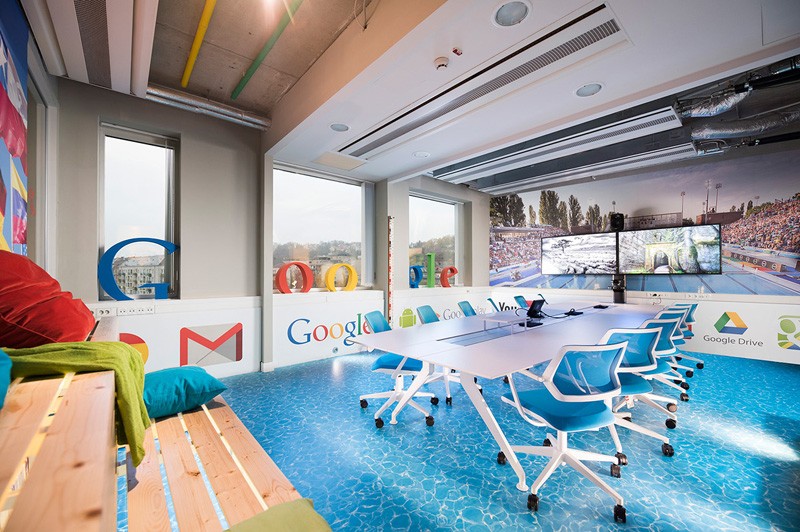 Printed wallpaper surfaces are strongly emphasised in the new office; we either used photo reproductions of floorings as in the boardroom dedicated to the Gellért steam room, or original photos from museum archives as in the work space. At some places, however, the printed reproduction of textures would not have been sufficiently authentic, so the sauna boardroom is made of real wood, and some parts of the mosaic are made of original materials. 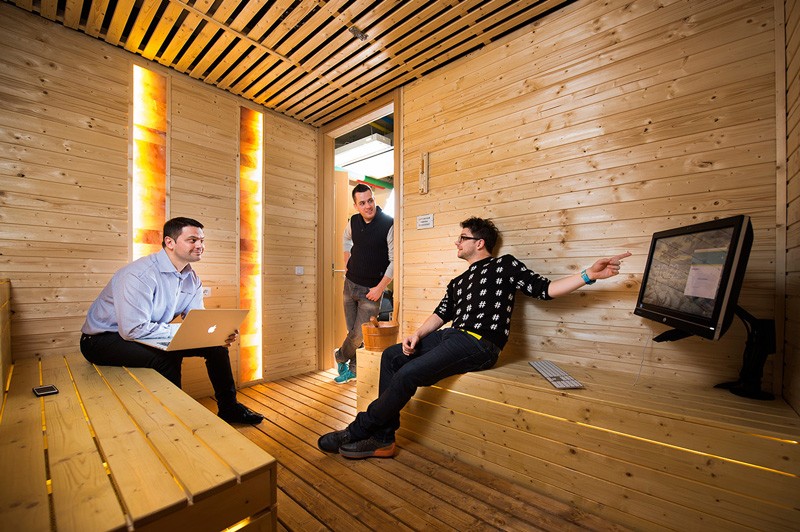 We insisted on using a lot of real green plants because the microclimate of living plants exerts a positive impact on the well-being of the employees. Occasionally, the functions of the interior office are inconsistent with the quality of the surface shown; for instance, we have chosen a carpet that mimics concrete, or vinyl flooring with water effect in the main conference room. 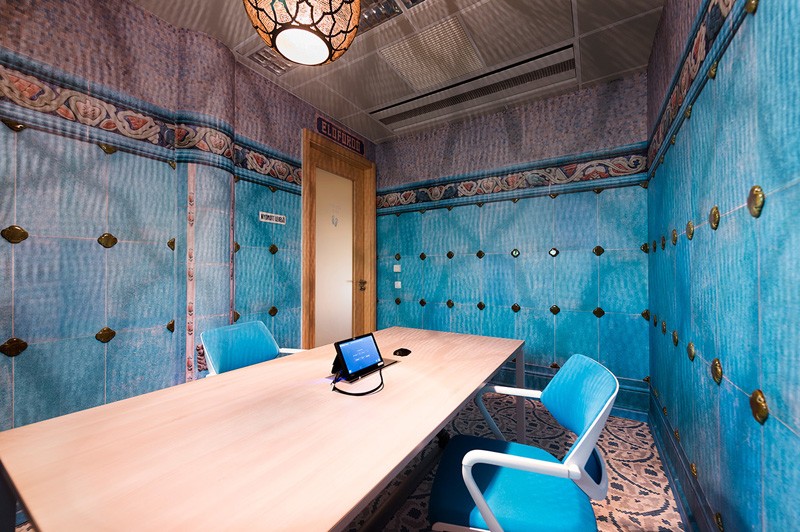 It was important to allow for continuous complementation and improvement by the employees of the office. Therefore, the appearance of colourful towels or beach balls in the office is just as mundane as logging on to a video conference in a swimming hat. 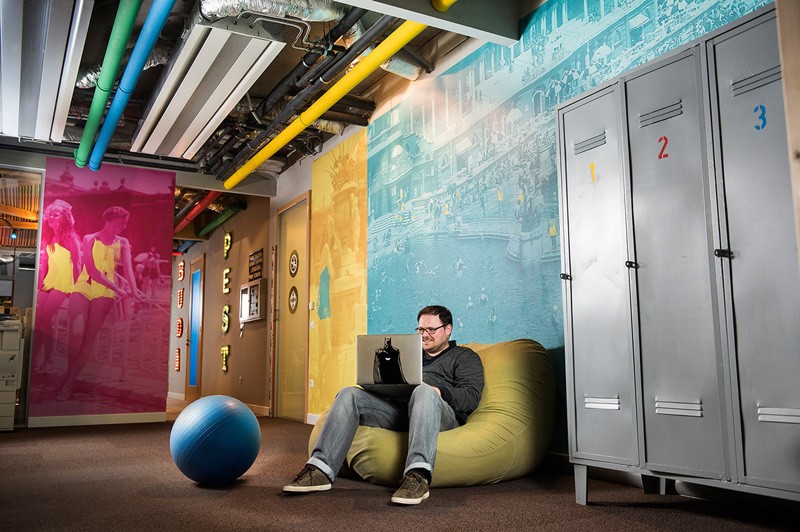 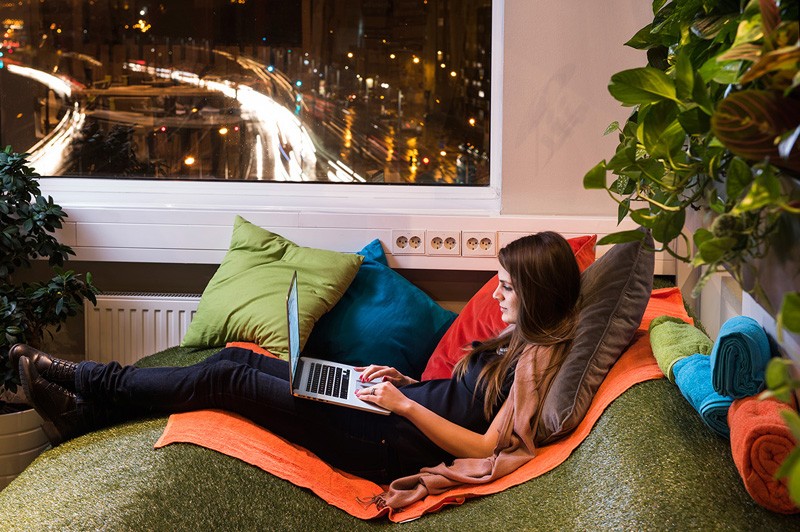