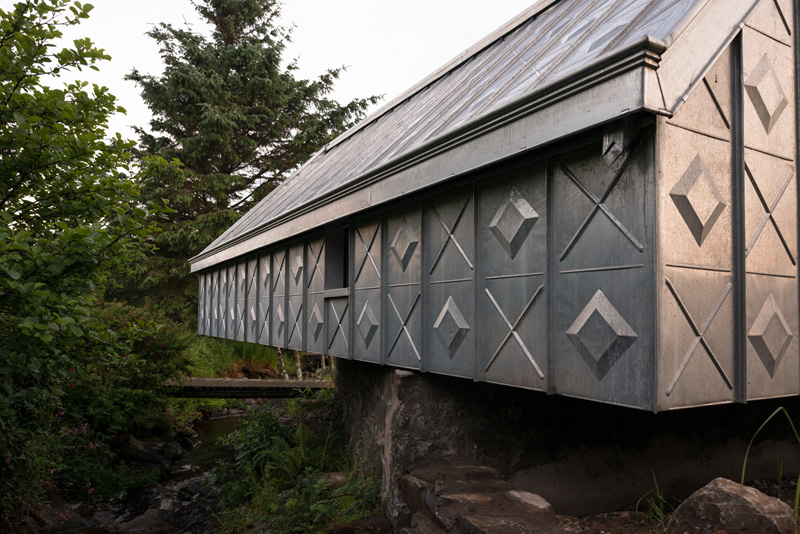 Studio Weave have designed the Midden Studio, an artist studio covered in embossed zinc panels, that hangs over a creek on a rural property on the west coast of Scotland. 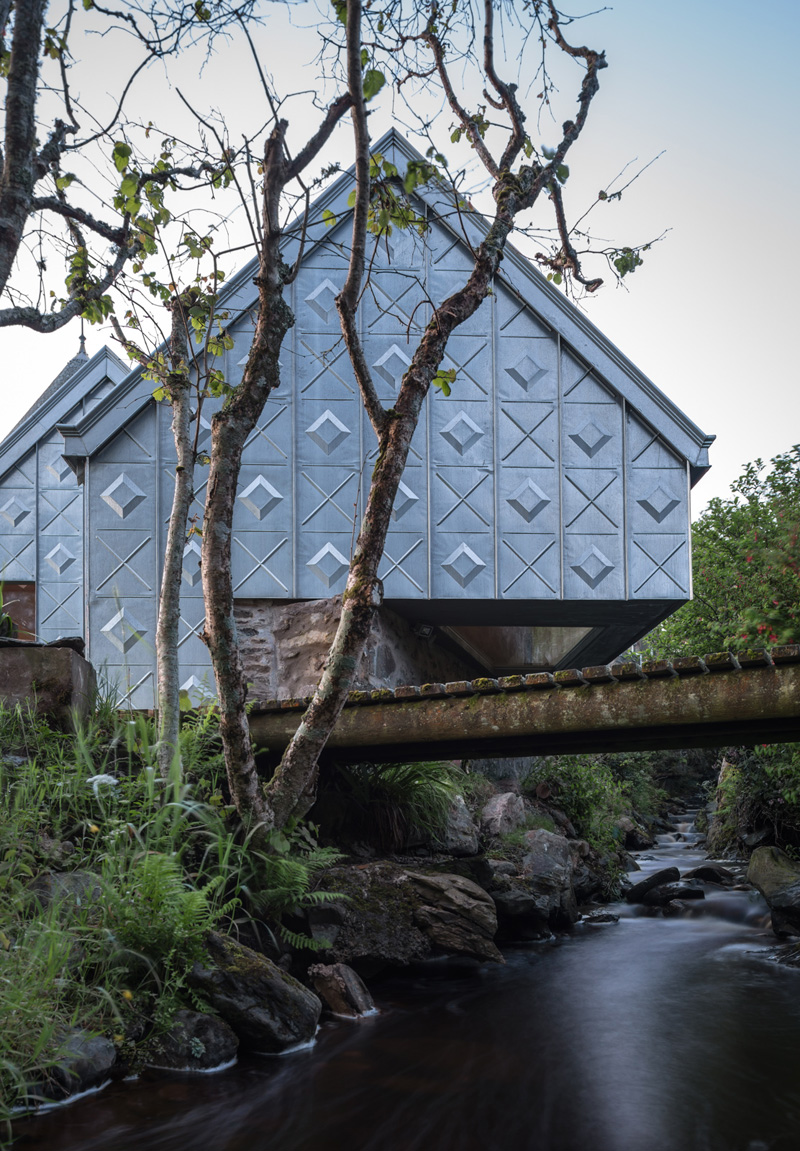 Perched on the edge of Britain, Midden Studio is a surreal atavistic building that reveals its secrets slowly. The spiky zinc-clad artist’s studio nestles by a stream on the west coast of Scotland. The building sits on top of a Victorian midden wall (formerly the depository for dung from the nearby stables). 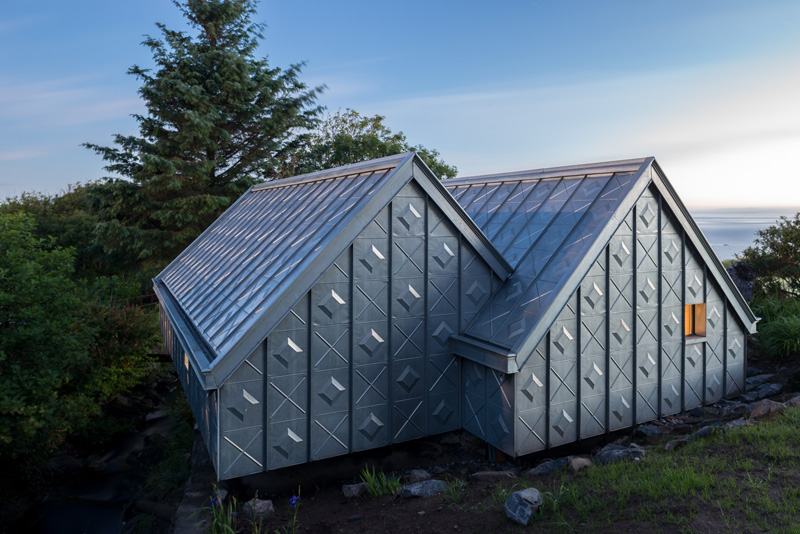 The artist has a long connection to the site and much of her practice is associated with peoples’ relation to places, so the architects have enmeshed the studio with the landscape. The artist’s work often includes themes of tracking changes, focusing on art which leaves marks at once permanent and delicate. 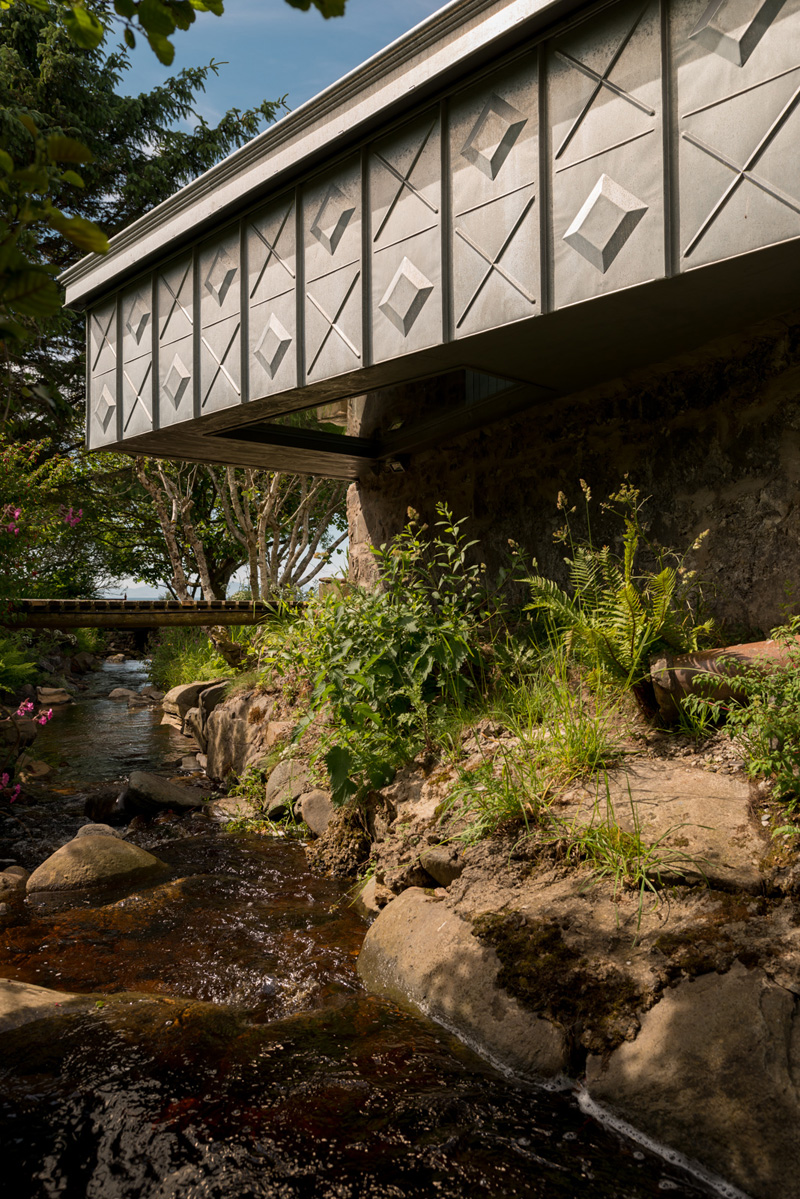 Recalling simultaneously the vernacular agricultural buildings nearby, the granite rocks that punctuate the landscape, and the flourish of the ‘Scottish Baronial’ style, the new studio intends to silently immerse itself in this ancient landscape, only revealing its surreal details on closer inspection: the cantilever which apparently floats over the burn, the uncanny twin gables and the echoed stone mouldings. 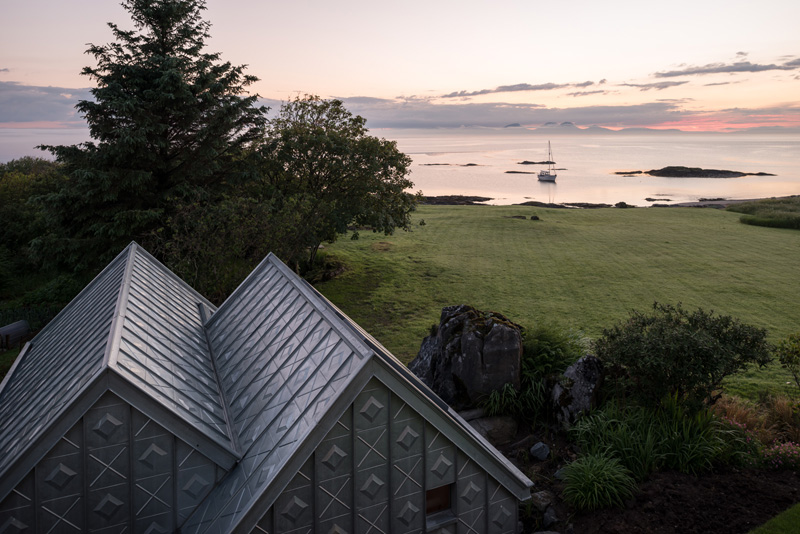 Midden Studio is the lovechild of native granite and the local buildings. Half a fancy creature with mouldings and gables; half hard, freckled and elemental. The granite rock surrounding the studio is echoed in the rusticated zinc, which reflects Eddie Blake’s ongoing preoccupation with the transmutation of materials. 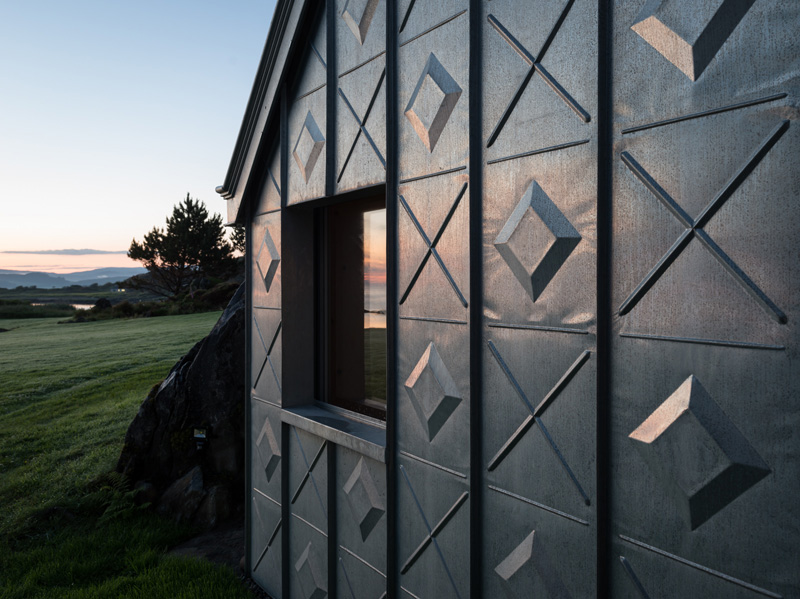 The studio sits next to Allt ant-Sionnaich, a fast flowing burn. A ‘soffit light’ allows the artist to peer down through the work surface at the flowing water beneath, and the building is filled with the sound of water all year round, from the Atlantic waves, the burn, the rain, and the drizzle. 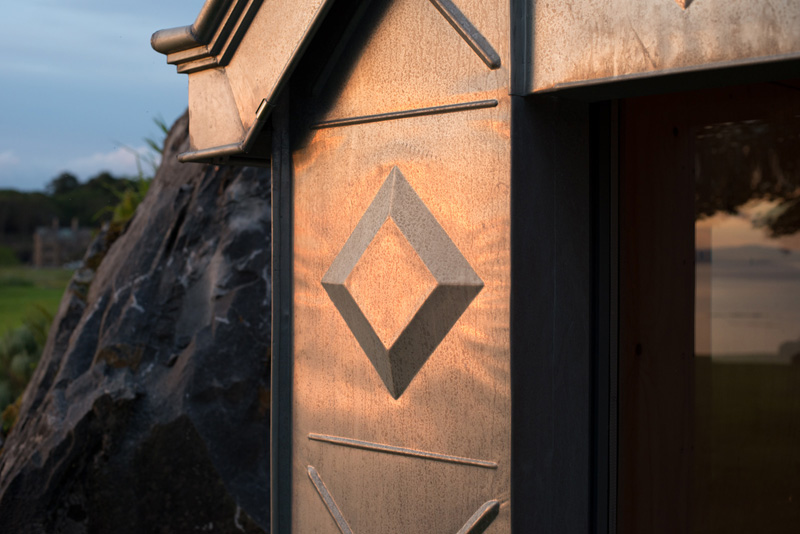 The rusticated diamond cladding pattern derives from Palazzo dei Diamanti, Ferrara, or Chiesa del Gesu Nuova, Naples, but as at Crichton Castle in Midlothian, it is a dour version of its southern counterparts. 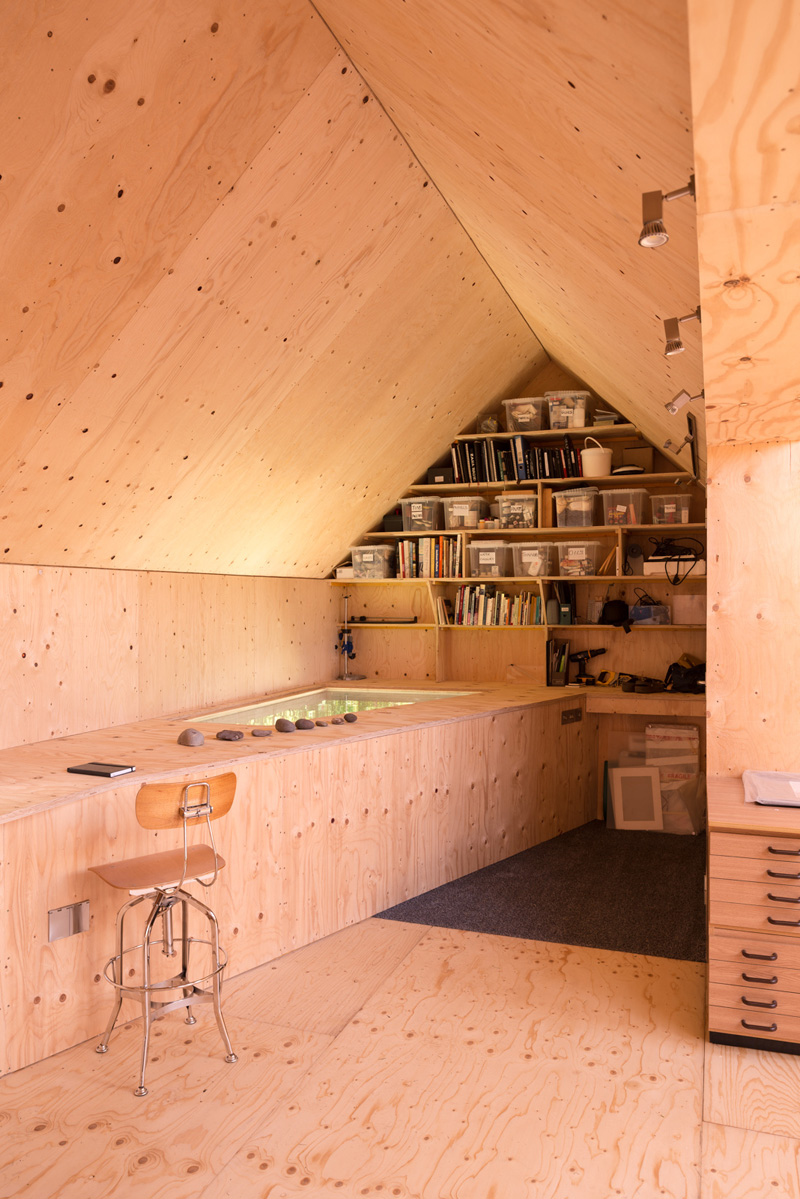 Blake is interested in how buildings become vessels for cultural meaning and this pattern evokes the history of a continental influence on Scottish architecture. Structurally the studio has been designed to withstand the extreme conditions of the site, and the raw zinc will age with dignity, becoming well-tuned with the landscape over time. The interior is as warm and clean as possible to facilitate the artist’s work. 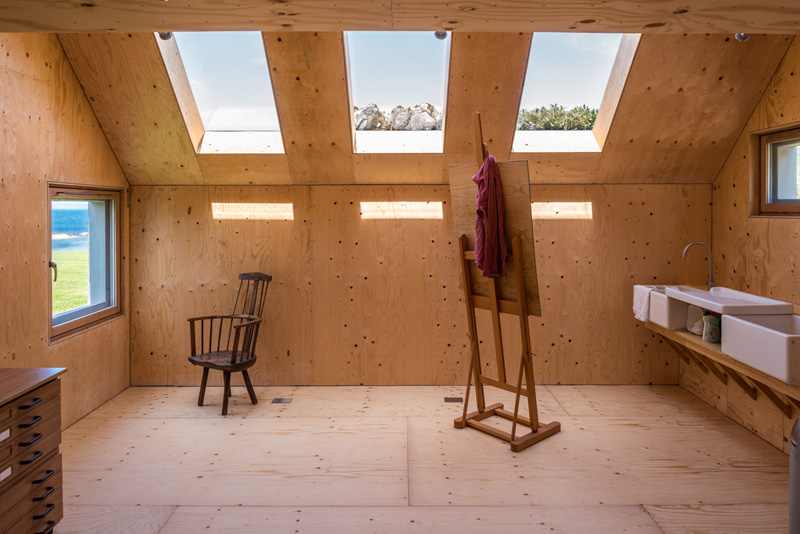 For this project the team has developed an original embossed standing seam zinc system in collaboration with VM Zinc. It is a system that VM hope to expand to become part of their commercial range. 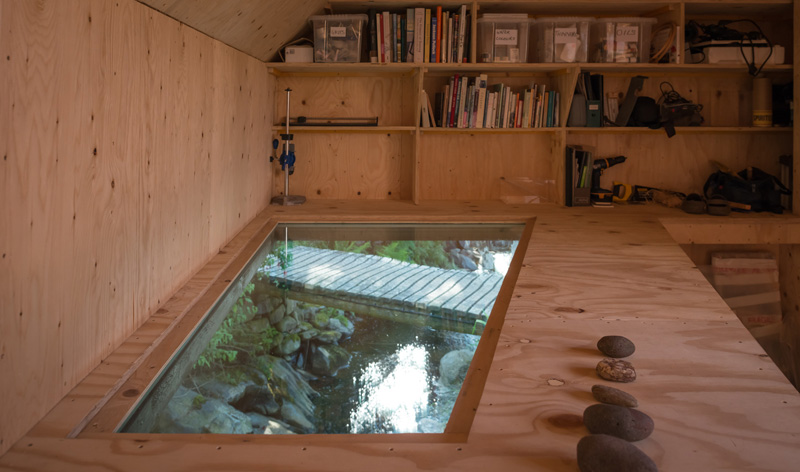