This Secluded House Is At Home In The Brazilian Mountains 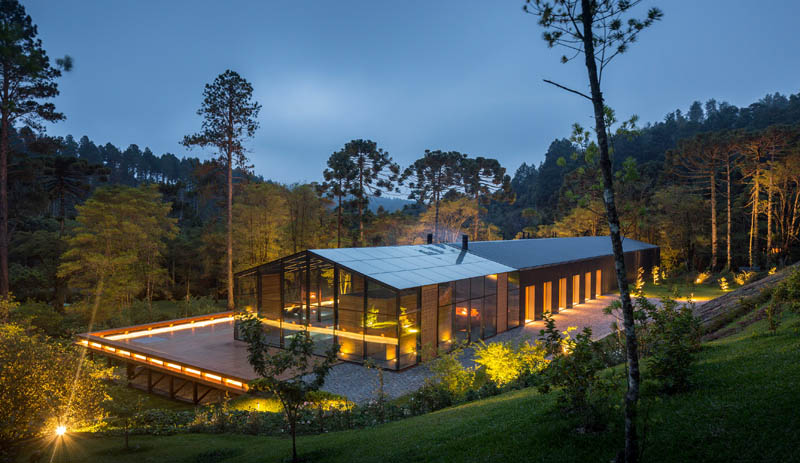 studio mk27 have designed the Mororó House, a home located 180 km from São Paulo, in a mountainous region of Brazil, that is known for its low temperatures. 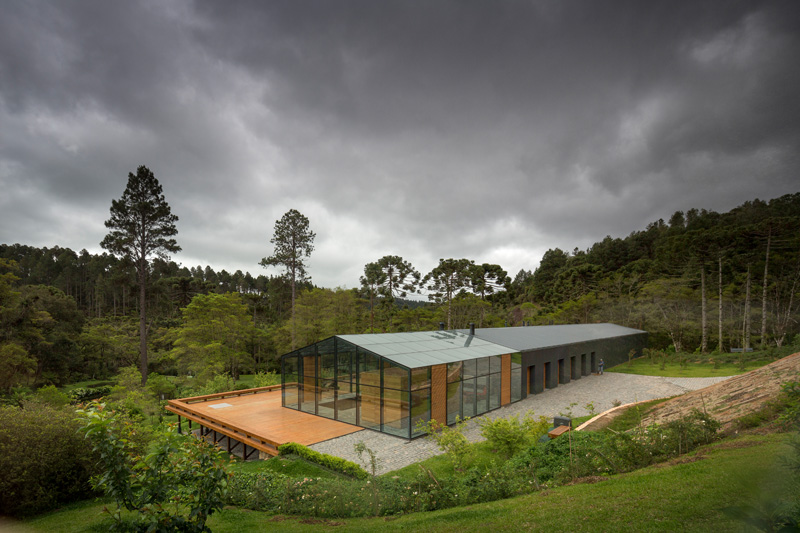 The architecture sought to create generous internal spaces for the cold days, such as, for example, a cozy living room and an enclosed bathhouse with a pool, where the views can be appreciated while being protected by a skin of glass. 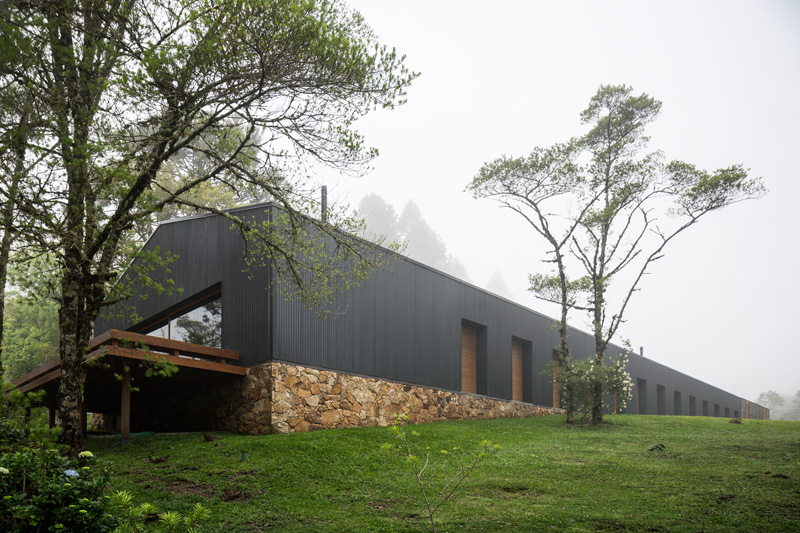 Externally, the same continuous volume creates a duality between an opaque block – where the living room, bedrooms and service areas are – and the transparent stretch of the heated pool and sauna. 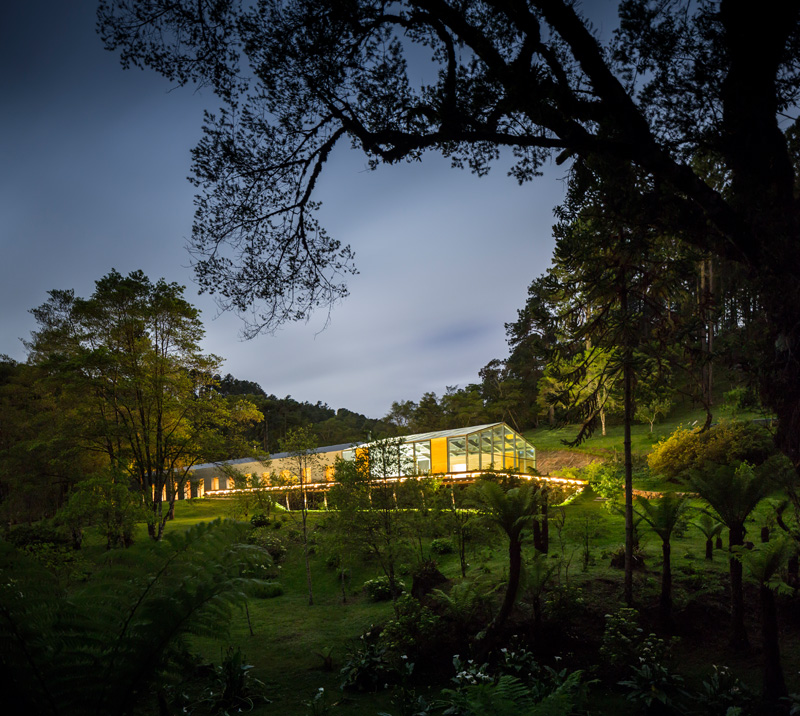 The volumetry of the house was given by a sixty-five meters extrusion of an icon-house, with pitched roof. Furthermore, an external wooden deck connects the spaces and creates a solarium to be used during the summer months. 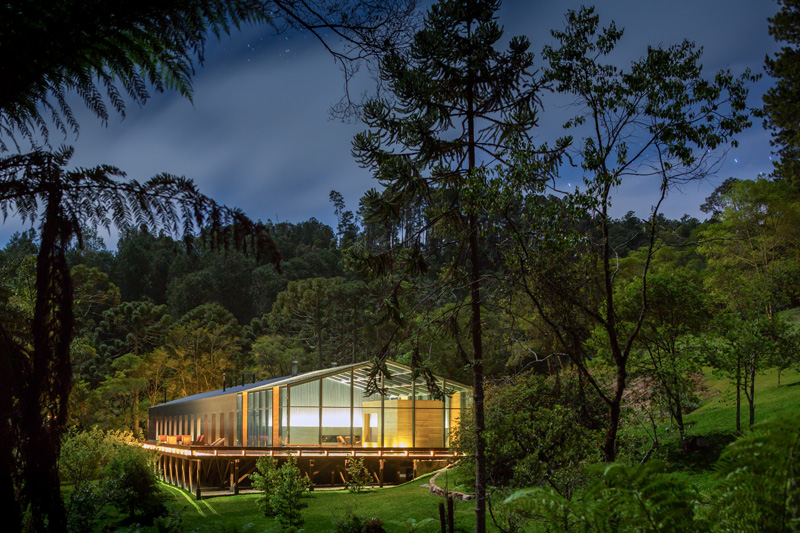 In the opaque part of the volume, which is 50m long, the openings were minimized and used as sliding doors to intensify the integration between inside and out. This relation between empty and full in the façade allows for an excellent thermal performance, with a high degree of electric energy conservation. 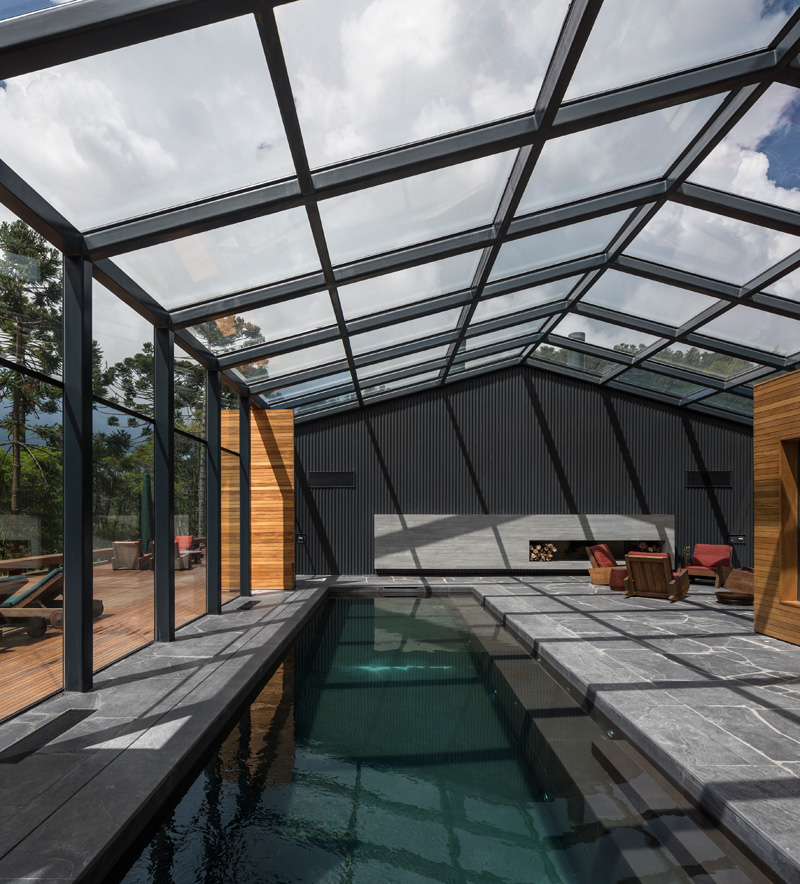 The transparent stretch is fourteen meters long and the internal ventilation was spatially designed to avoid condensation on the glass by the heated pool, which would harm the relation with the view. 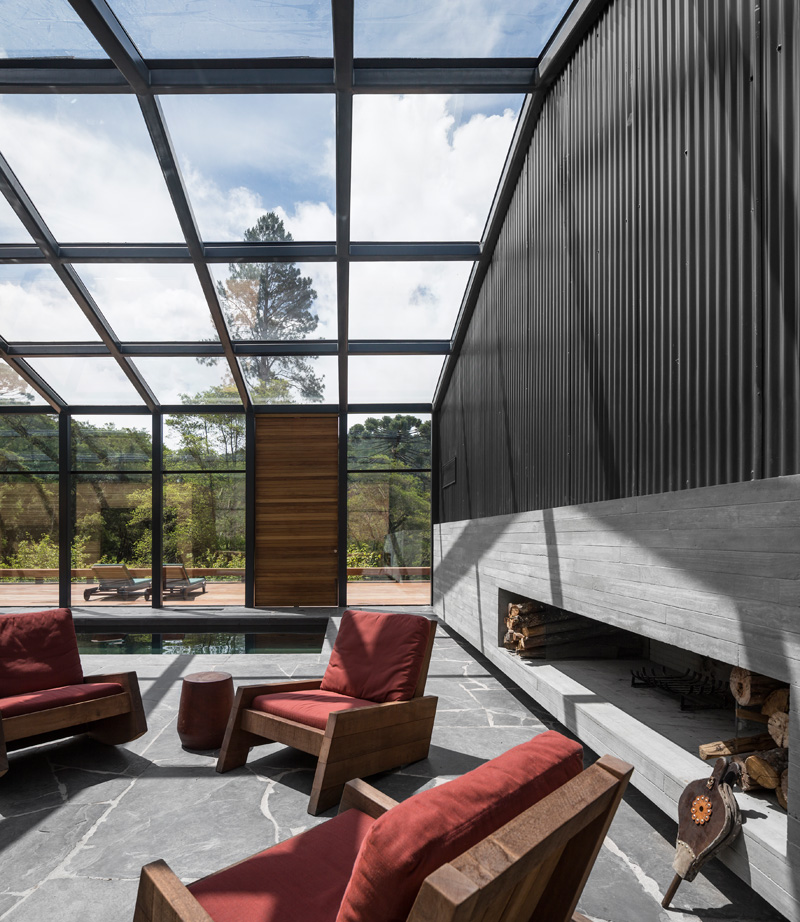 The house was not situated on the top of a rugged site, as initially desired by the clients, but in its lowest part – in the midst of a beautiful forest of pine trees. This solution allowed the building to be surrounded by nature, creating an intimate relation with the site. 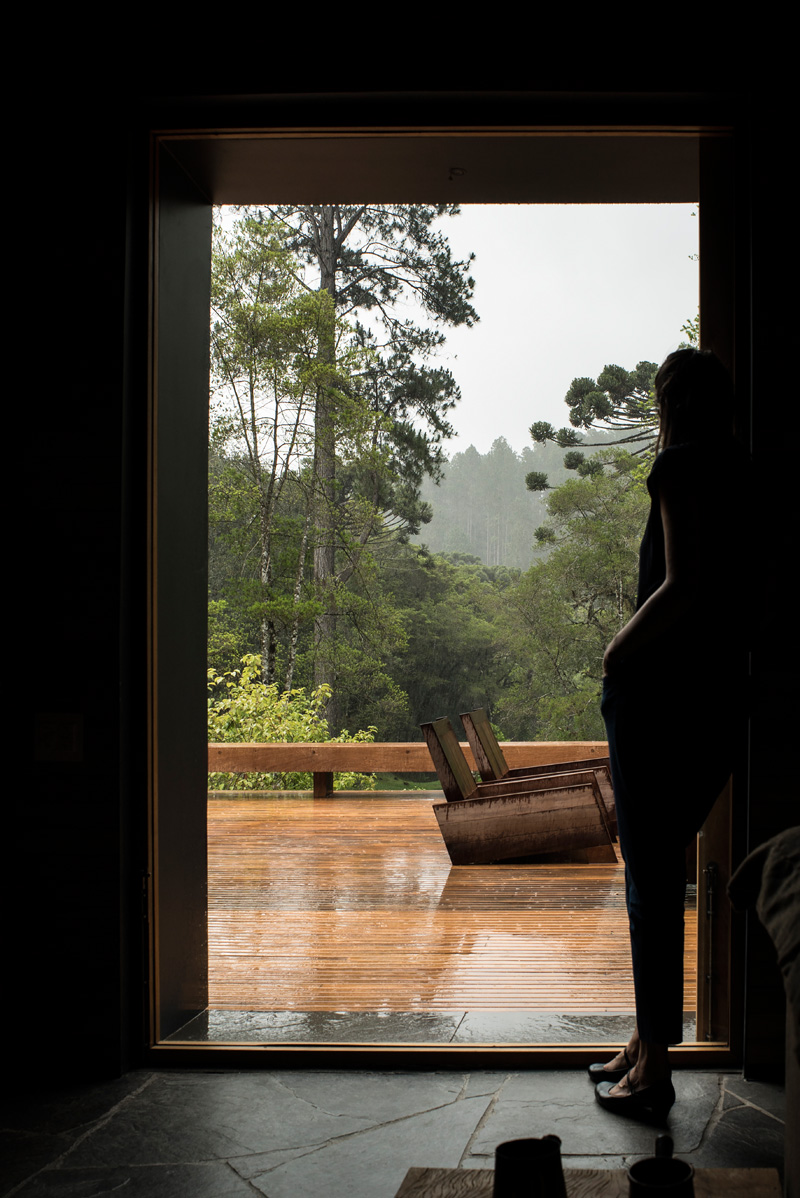 The initial premise of the project was to have a quick and cheap construction. Therefore, the architecture found industrialized solutions such as metal structures and steelframe walls. 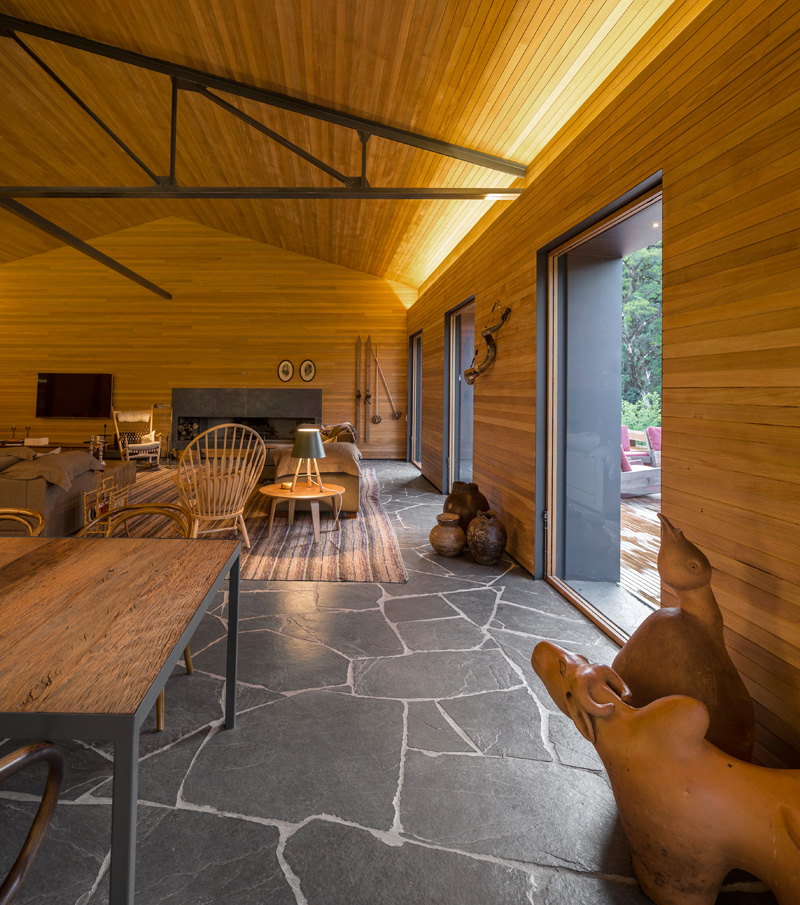 The site, despite high rainfall, remained always clean. Unlike the Brazilian constructive culture, few elements were made entirely on site, but instead mounted or assembled there. The time to build this house was less than the usual, even with the site’s difficult access. 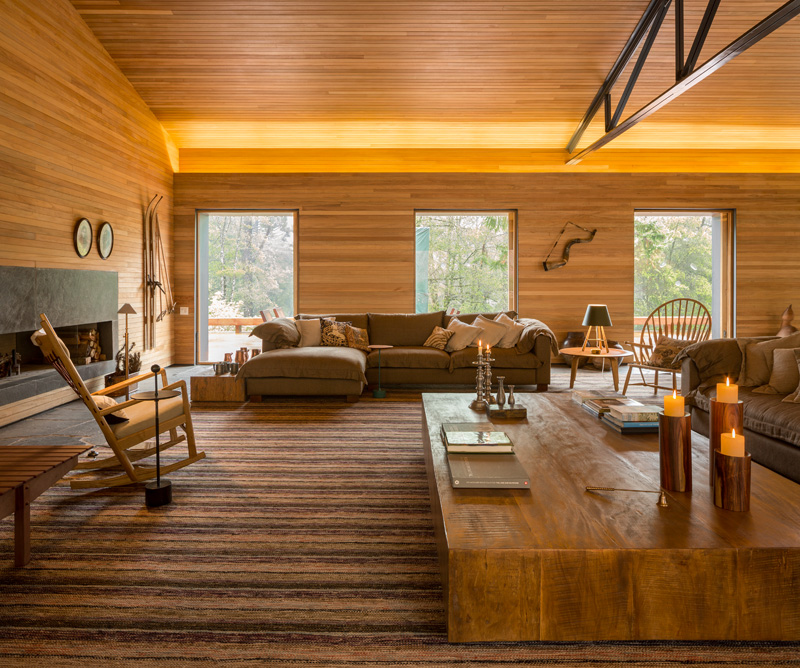 The choice of the materials for the interiors, such as wood, made it a cozy house, like the traditional chalets in the mountains. 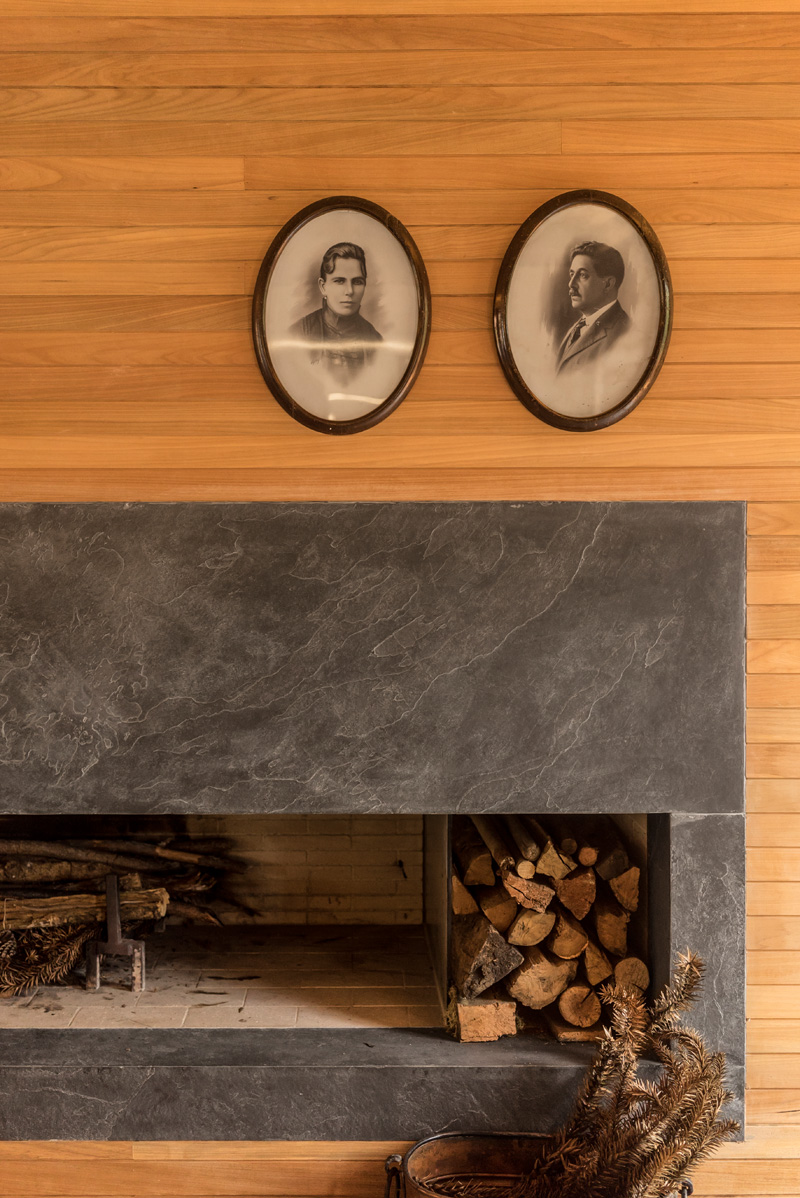 Following the desires of the future residents, the kitchen could be integrated to the spaces via wooden sliding doors – that could be entirely opened. 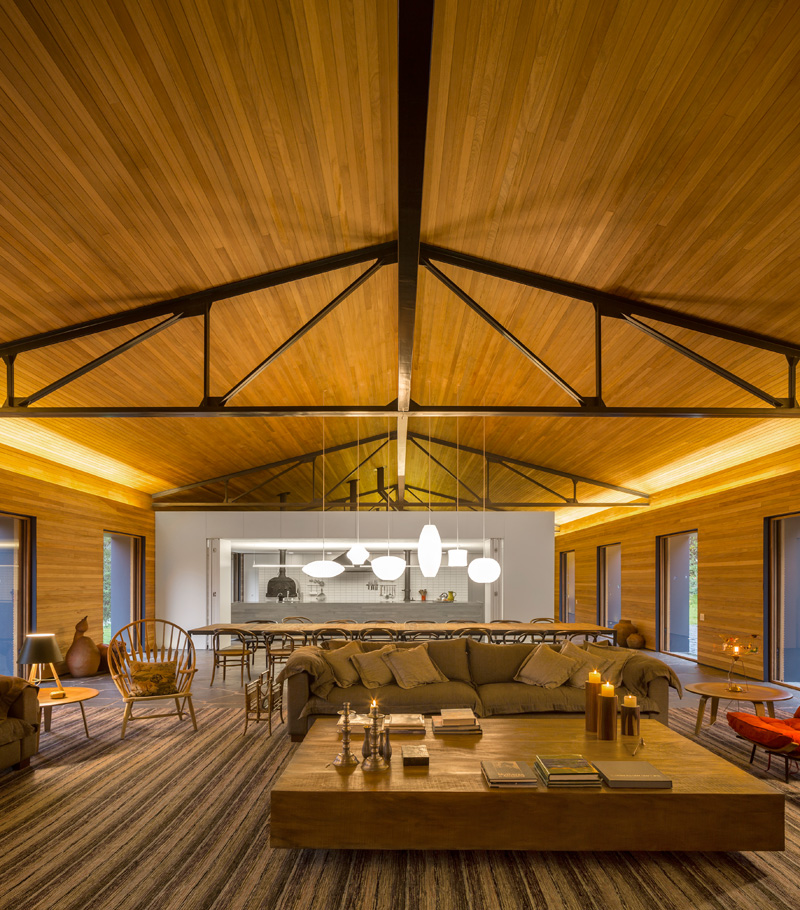 Thus, it was not only possible to design ample and continuous spaces on the inside, but also to have central spaces for the quotidian life which organized the house plan. 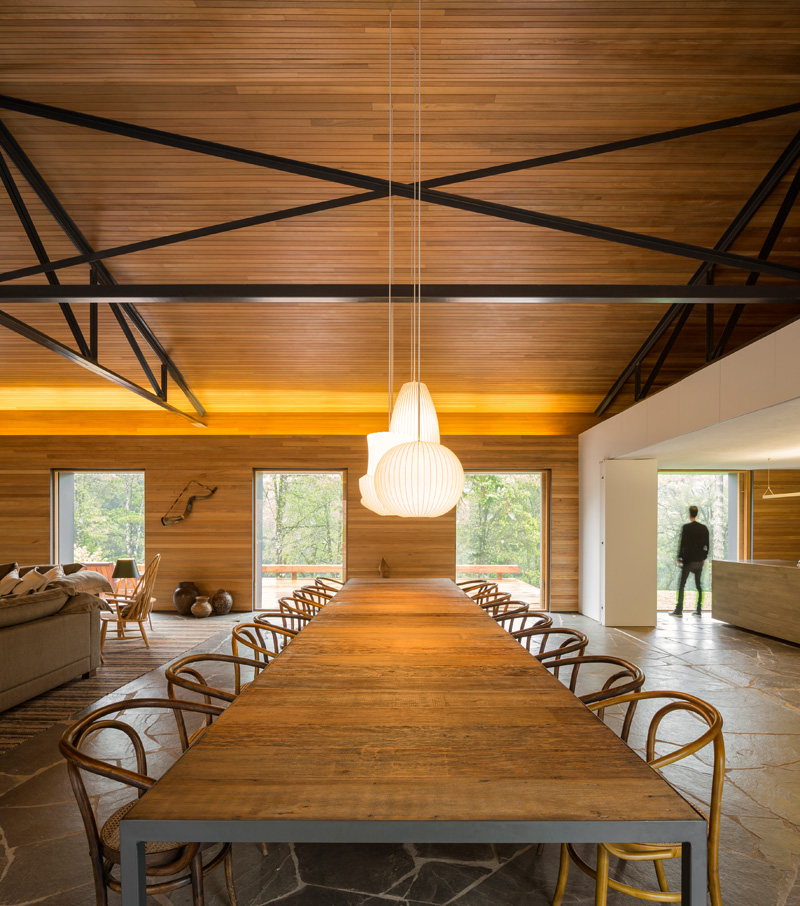 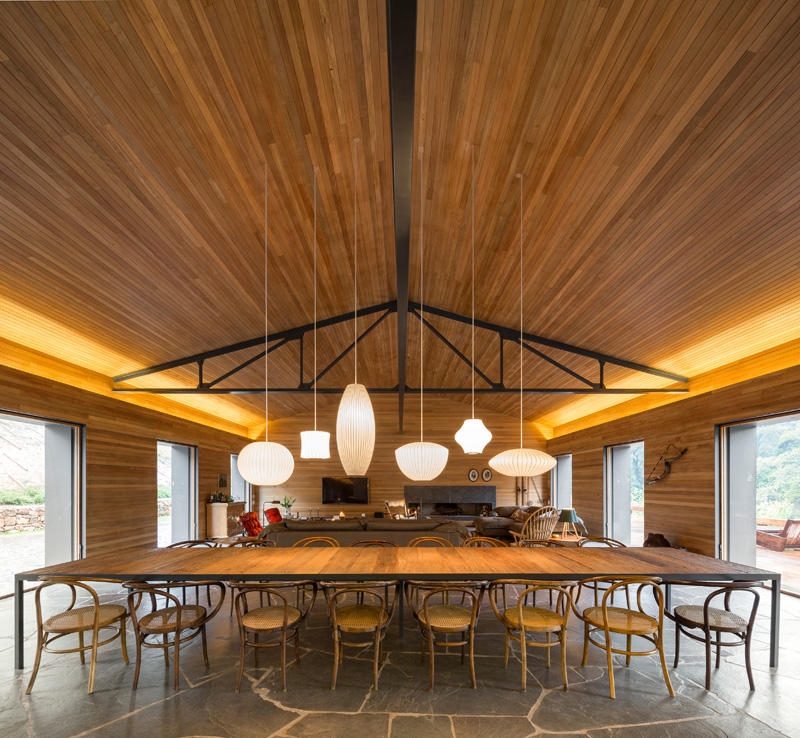 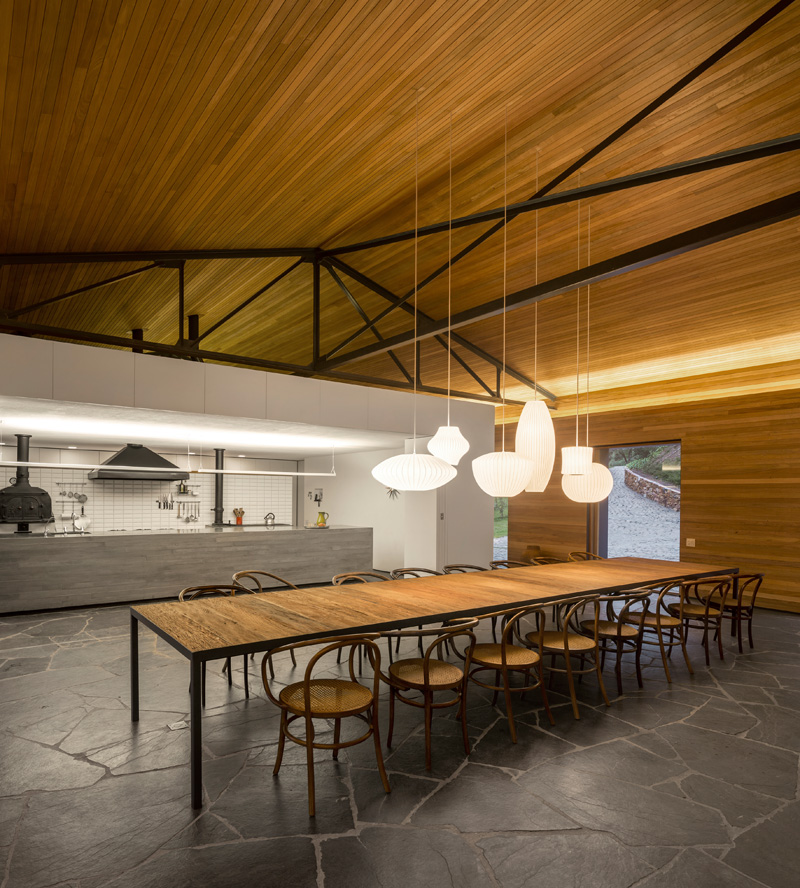 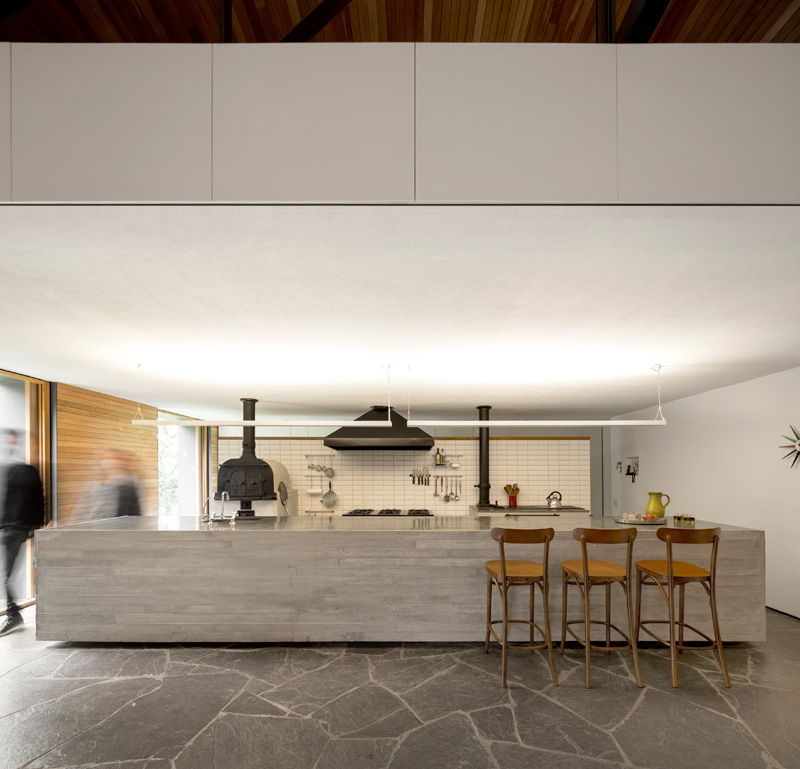 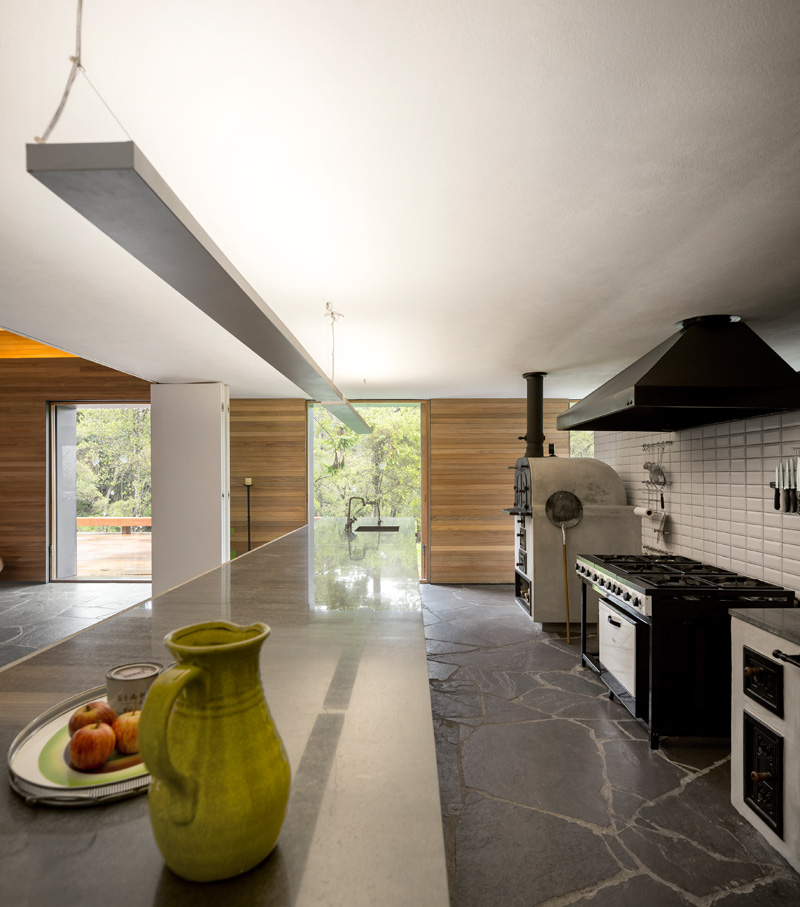 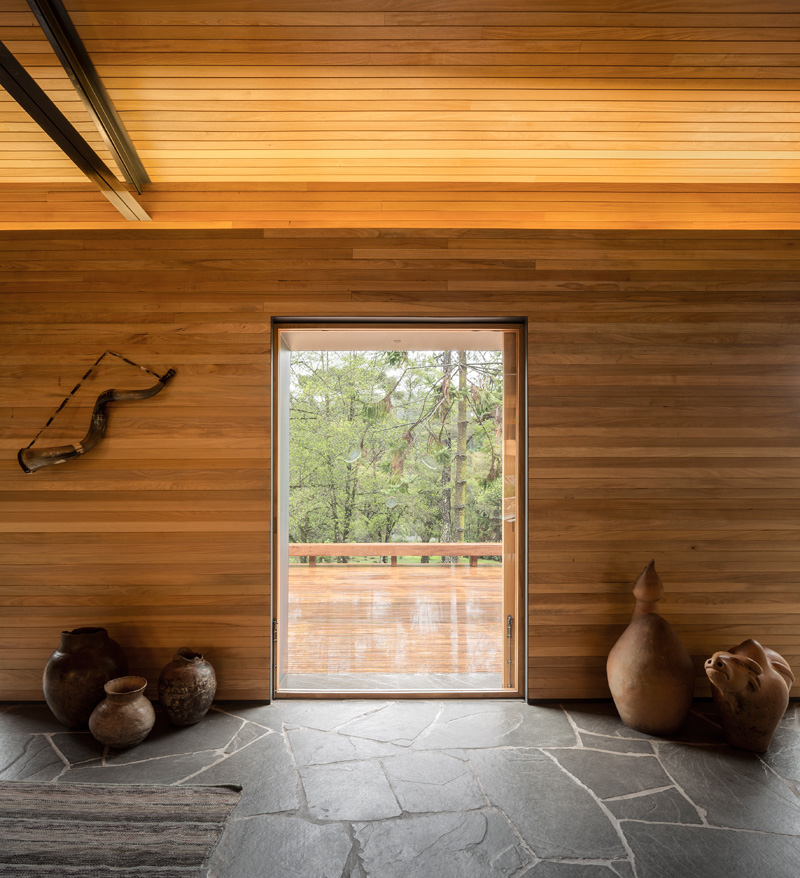 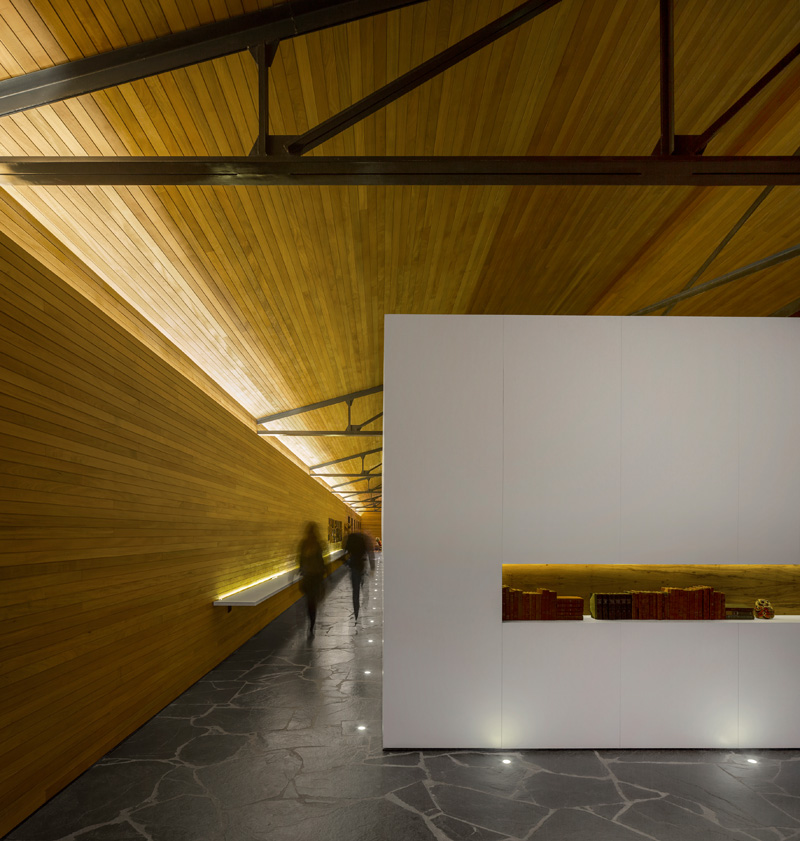 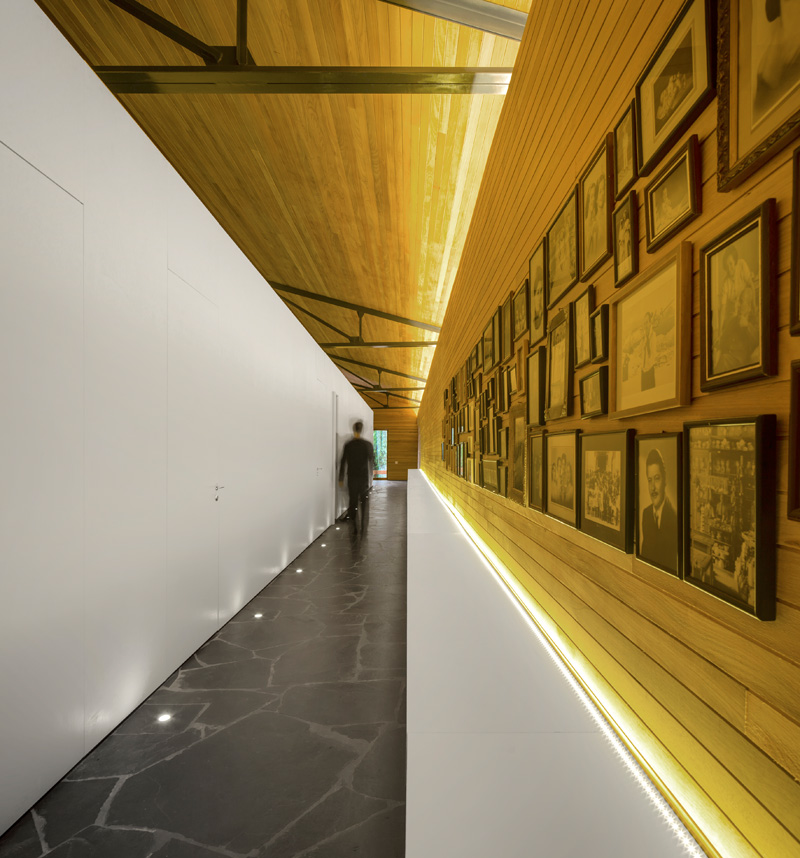