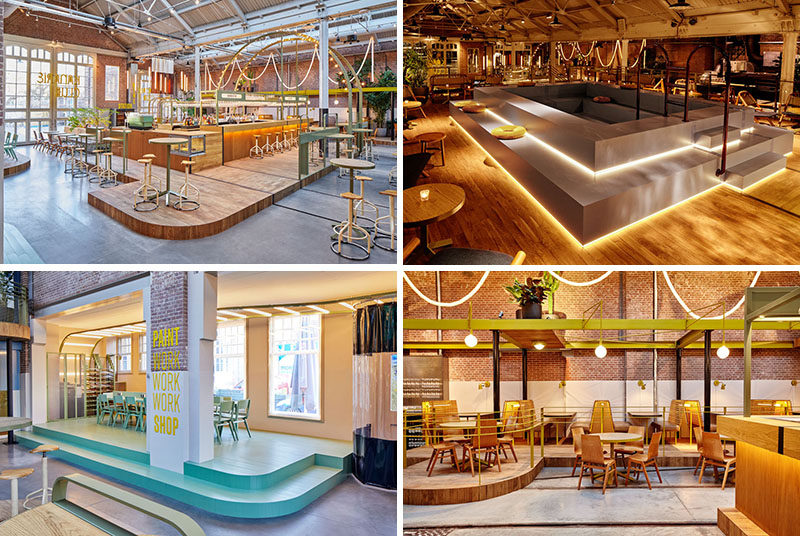 Studio Modijefsky have transformed what was once a former tram depot in Amsterdam into a restaurant and bar named the Kanarie Club, that features many different zones.

When the space was a tram depot there we many tasks taking place when servicing the trams, such as electricity, paint, wood and metal work. These tasks inspired the material and color palette of the new interior.

The designers also created the identity and branding of the space. Extra-large canary yellow signs are visible from the street and hang above both entrances. 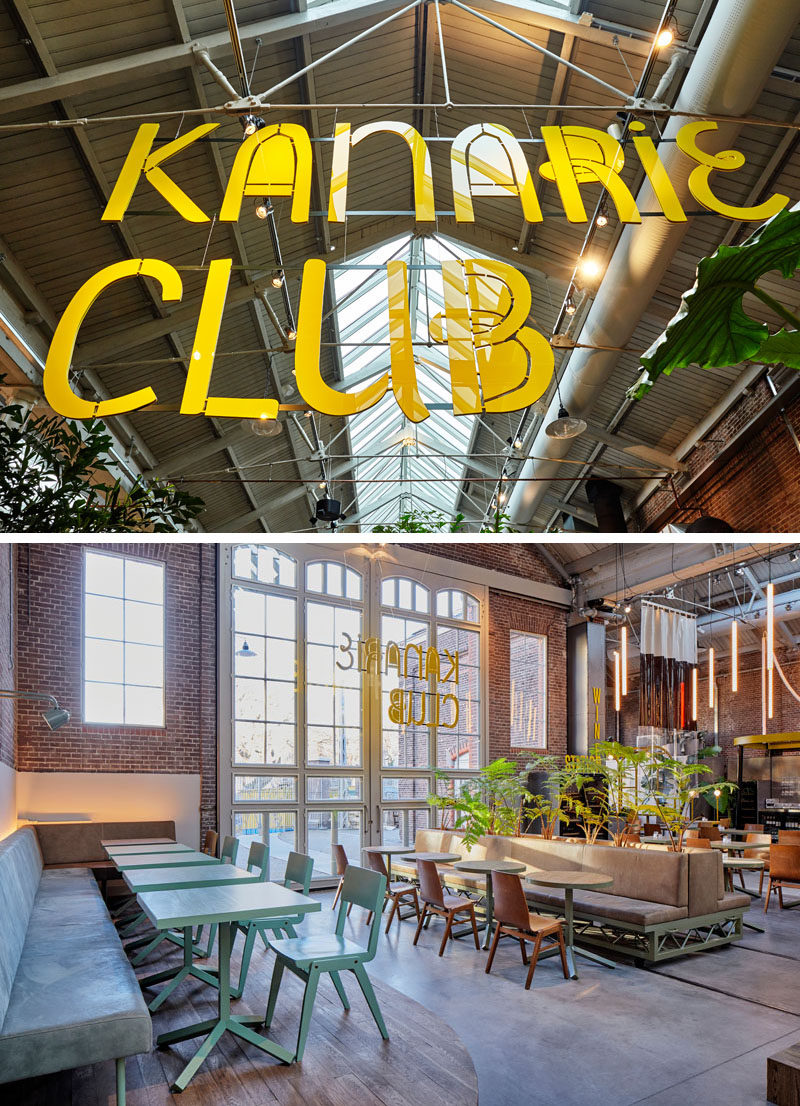 Throughout the interior tram rails have been left as a design feature and certain elements like the bar below, have lines on the platform and counter that match up with the rails. The arch positioned over the bar with integrated lights also rises up from the floor following a set of tram rails.

Other elements, like these table and chairs on a stand, have small wheels that are positioned within the rails, giving the design a playful touch. 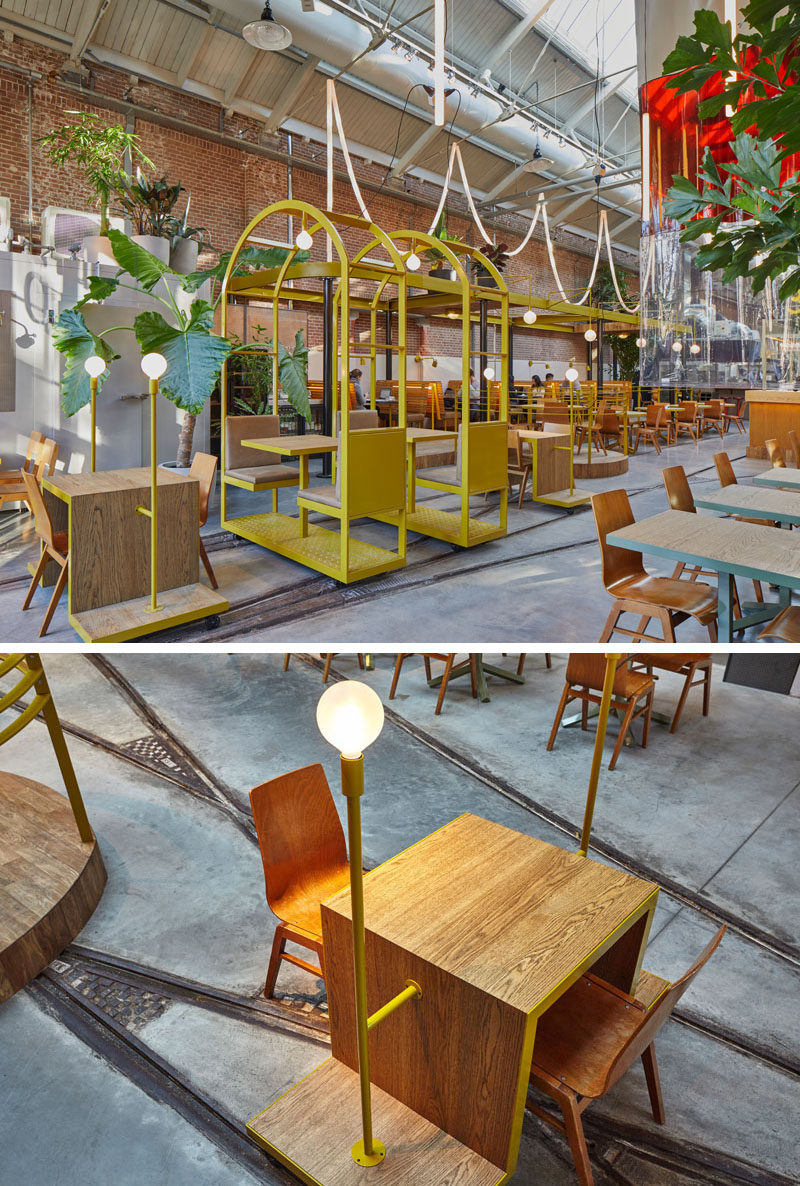 Here’s an alternative look at the arch over the bar showing the tram rails. Custom made furniture throughout the interior resembles the vintage design of the old electric tram seats.

Designed to be a place to work during the day as much as it is a restaurant and bar, this zone, inspired by the paint workshops of the original tram depot, features a colorful platform and signage. A large table with built-in usb ports and plugs makes it possible groups to work during the day.

Lockers with charging points inside them make it possible to lock up your phone or laptop while it charges. And a photo booth adds an element of fun to the space. Stairs lead up to the pool bar.

The pool bar is exactly that, a space that has a pool but it isn’t filled with water, instead it’s filled with comfy cushions. The inspiration for this area is taken from the squatters that once occupied the old tram depot. They used leaking water from the ceiling to create a pool that they could enjoy themselves.

The pool is made out of blue rubber and a strip of blue tiles that are also featured on the bar. A wavy mirror element covers the bar lift, and pool signs and graphics reference swimming pool rules.

Here’s the view of the space from the pool bar. 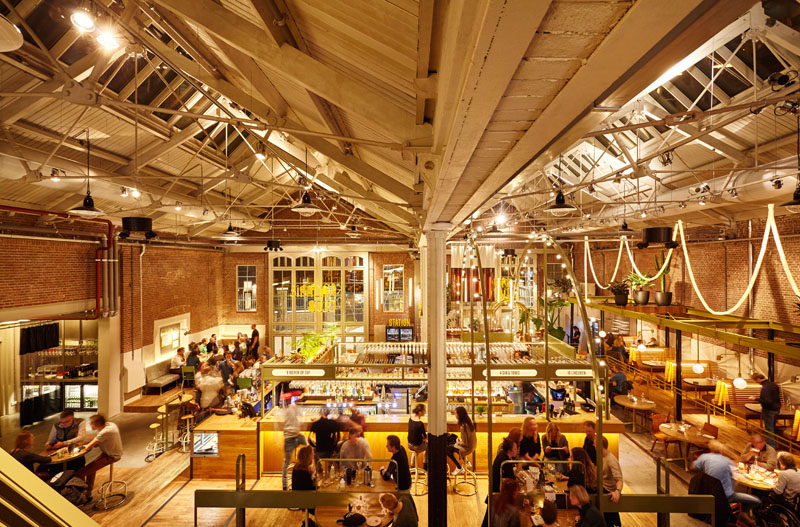